Lance Pekus says there is more than one hero in his family. 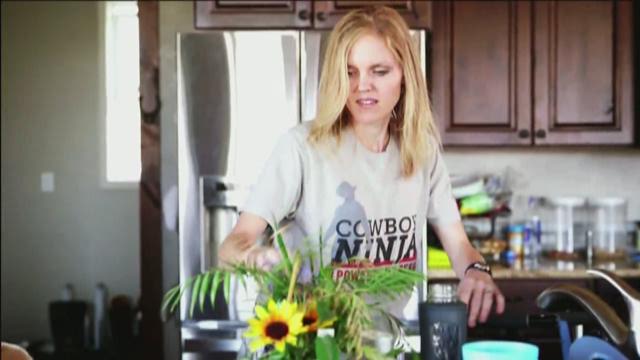 It was an exciting and emotional night for Cowboy Ninja Lance Pekus and his fans.

The Idaho cowboy had the fastest time Monday night on “American Ninja Warrior,” advancing him to the next stage of the finals.

But the "Cowboy Ninja" also revealed to America there is more than one hero in his family.

You would have never known it when watching him compete on national TV that with every grueling obstacle he manages to run through, climb over or hang from, back at home in Salmon, Idaho -- his wife Heather is battling her own competition.

"In our early 20s, Heather got diagnosed with MS,” said Lance Pekus. “She was able to get on medication and she went eight or nine years without having symptoms or problems.”

“I was active, I ran, I lifted weights, I rode horses, but progressively over the last two-and-a-half years, it's gotten bad,” said Heather Pekus.

“She definitely struggles to get around,” said Lance.

“I went from trying to run, to a walker, in ten months," said Heather.

Lance tells us he and his wife struggled to go public with her disease.

“It was kind of hard for us to come out with it,” he said. “We weren't quite sure if we wanted to or not. It's kind of been a private thing we've been dealing with but overall the reaction has just been amazing. The amount of support we've been getting from people all over the country, people saying they have MS and then to keep fighting and just the support, it's been amazing."

Traveling to Las Vegas to watch Lance compete became too much for Heather, but as he made his run in the stage one finals of “American Ninja Warrior” Monday night, Lance says Heather was right there with him.

Lance says the amount of support and love he and his family have received since the show aired, has been overwhelming, amazing.

"We love hearing the stories and encouragement from people and just being able to bring awareness to people across the country about MS and the people battling with it and what it can do," said Lance.

As for his signature jeans and cowboy hat, Lance tell us they won't be coming back this season as he competes in the finals.

But he proved Monday night, he doesn't need them to earn the fastest time on the course as long as he has his wife by his side.

"I told her how inspiring she is to me. She said, how can I be an inspiration? I'm sick,” said Lance.

“I've never imagined having this but I've always been a really positive person and I want my kids to remember me that way," said Heather.

With Heather's love and support, Lance finished with the fastest time on the course Monday night.

As for that miniature black cowboy hat he put on the buzzer. He told us he just thought it'd be a cute idea.

A local hat maker in Salmon, who makes Lance's cowboy hats, made a few little ones for him.

Lance now advances to the stage two finals of “American Ninja Warrior,” which you can watch on KTVB on Sept. 18.

Lance will be in Boise on Thursday, Sept. 21 at the FitOne Healthy Living Expo. You can find him at the Idaho Beef Council booth.