The justice's early law career took on a case in Idaho, where the family of the attorney she worked with still resides. 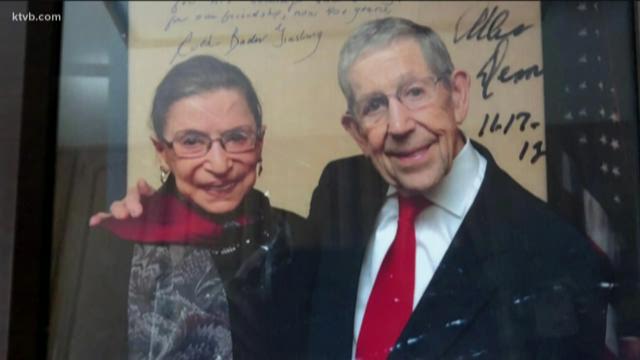 BOISE, Idaho — The film "On the Basis of Sex" is based on US Supreme Court Justice Ruth Bader Ginsburg's early law career, but also includes a little known tie to Idaho.

Spoiler alert to anyone that is planning on seeing the movie: One of the cases featured in the film was tried in Idaho, by late Boise attorney Allen Derr.

His widow, Judy Peavey-Derr, witnessed the case as it happened in the early 1970s and explains how it feels to see the case be played out on the silver screen.

Leading up to the court case, Reed v. Reed, women's rights were finally beginning to emerge and Ruth Bader Ginsburg was one of the leading attorneys that paved the way forward for expanding women's rights.

Ginsburg wasn't alone in taking on legal cases on the issue. Derr was a fellow attorney, of whom Ginsburg spoke highly.

"She spoke very highly of Allen, and I'm so glad because I suspect there was a time in that movie where she could've said 'well I did this, I did that.' But she didn't, and I'm so pleased," Peavey-Derr said.

Derr was 43 years old when he took on the landmark case that is featured in the film.

The case was a question of whether the husband or the wife should receive the savings accounts that belonged to their son, who had just passed away. The wife, Sally, opened the account and had deposited money into it.

During that time, legal standards leaned towards the husband in cases such as these.

"The courts and the states at that time said, and I'm paraphrasing, but it said when both parties apply to administer an estate and are equal in competence, then the man must be preferred over the woman," Peavey-Derr said.

Sally Reed didn't have much hope or success in her legal battle until she met Derr, who would end up leading the case.

Derr was able to win the case in district court, but Idaho's Supreme Court reversed the decision. This led Sally Reed and Derr to take the case all the way to the U.S. Supreme Court.

"Sally had a strong belief that women shouldn't be treated so poorly, and apparently Ruth Bader Ginsburg also believed that, and at the same time, there were these forces working to change society because the law hadn't changed, but society had," Peavey-Derr said. "And it was time for the law to catch up."

At the time, Ginsburg was volunteering at the ACLU and teaching at Rutgers University. The ACLU heard about Derr's case and reached out to him.

"They actually called him, unlike the film," she said. "And said 'can we join you in the case?'"

Derr and Ginsburg had never met prior to the day that he argued the case, but Peavey-Derr says that her husband thought that Ginsburg was 'dynamite.'

Derr left his mark on history and society with this case, and now has been showcased on the big screen.

"I've always been proud of Allen, but I don't think he was truly appreciated, but now to have some focus on that piece of history that he was in it gives joy to me, it gives joy to my heart," Peavey-Derr said. "He deserved to be recognized for that monumental step in history."