"I intend to fight like hell with each of you Boise, and together we will pen the pages of a new book about a healthy, prosperous and welcoming city for everyone." 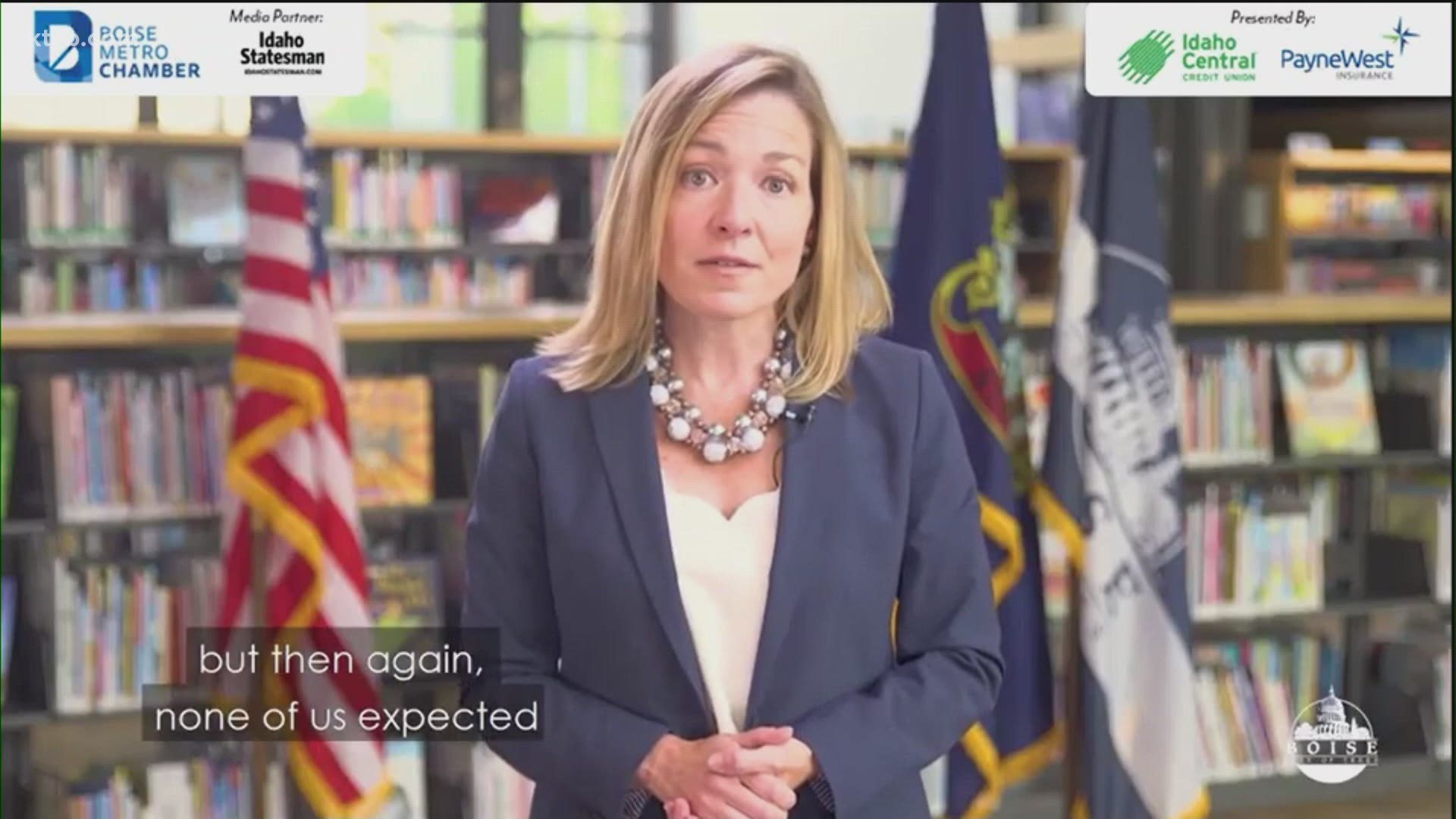 BOISE, Idaho — Boise Mayor Lauren McLean on Wednesday gave her first-ever State of the City address from the library on Ustick and Cole roads. While she didn't announce any major policy changes or proposals, McLean offered hope.

Mayor McLean discussed the city's handling of the pandemic, housing affordability, the city's action on climate change and addressed the history of racial inequality in the city and the state.

"Our state has a troubled record on race," she said. "We have seen housing discrimination profiling of communities of color, and an Ayran Nation compound that existed for far too long. These are facts, even if we'd like them not to be.

"This centuries long problem won't be solved in a training or a series of conversations," McLean added. "It requires an ongoing commitment that I'm making to those that call Boise home."

The mayor devoted a lot time in her speech to addressing the ongoing pandemic, which hit Idaho just about two months after she was sworn in.

"COVID changed so much so quickly," she said. "Many of us are still at home to protect our health or the health of our loved ones.

"We did what was right," she added. "To those whose livelihoods were impacted by these closures, I thank you. I know this was so terribly tough on you. You waited and waited for unemployment benefits. You waited for assistance some of which is still yet to arrive. We as a country and state can do better."

Watch the full address in the YouTube video player below.

McLean also talked about future economic opportunities, making the claim that more businesses are interested in relocating to Boise this year than there were a year ago.

"We will convert these inquiries into more economic opportunities for our residents," she promised.

And she revisited one of her big campaign promises - more affordable housing.

"To increase the number of affordable homes in our community, were investing in a housing land trust," she said. "It supports the development of various housing types allowing for home ownership and rental opportunities for income restricted families."

On another big campaign issue - climate change - McLean said the time to take action is now, adding that the city is working toward a clean energy future.

McLean, who is Boise's first female mayor, took office seven months ago after beating then-Mayor Dave Bieter with 65% of the vote in December's runoff election. She brought up the sense of wonder that came over her when she was sworn in as mayor.

"I looked out and felt a sense of wonder, that hope, and a deep sense of gratitude as I saw your faces and those of children like my own son and daughter, who wouldn't, without you, have known that after a century and a half a woman in Idaho would be elected mayor of its largest city... I was inspired. Excited to dig deep into this remarkable place. It was our dream, and it was an everyday thing, a Boise dream. An American dream. That dream is shared by everyone who sets foot in the City of Trees, no matter who you are or where you come from," she said.

Since being elected, she has faced backlash by the Idaho Freedom Foundation over her transition team's list of 350 recommendations, including free internet and committing to racial equality. McLean also faced a recall effort but it was eventually suspended on Sept. 4.

To close her address, McLean said, "I intend to fight like hell with each of you Boise, and together we will pen the pages of a new book about a healthy, prosperous and welcoming city for everyone."