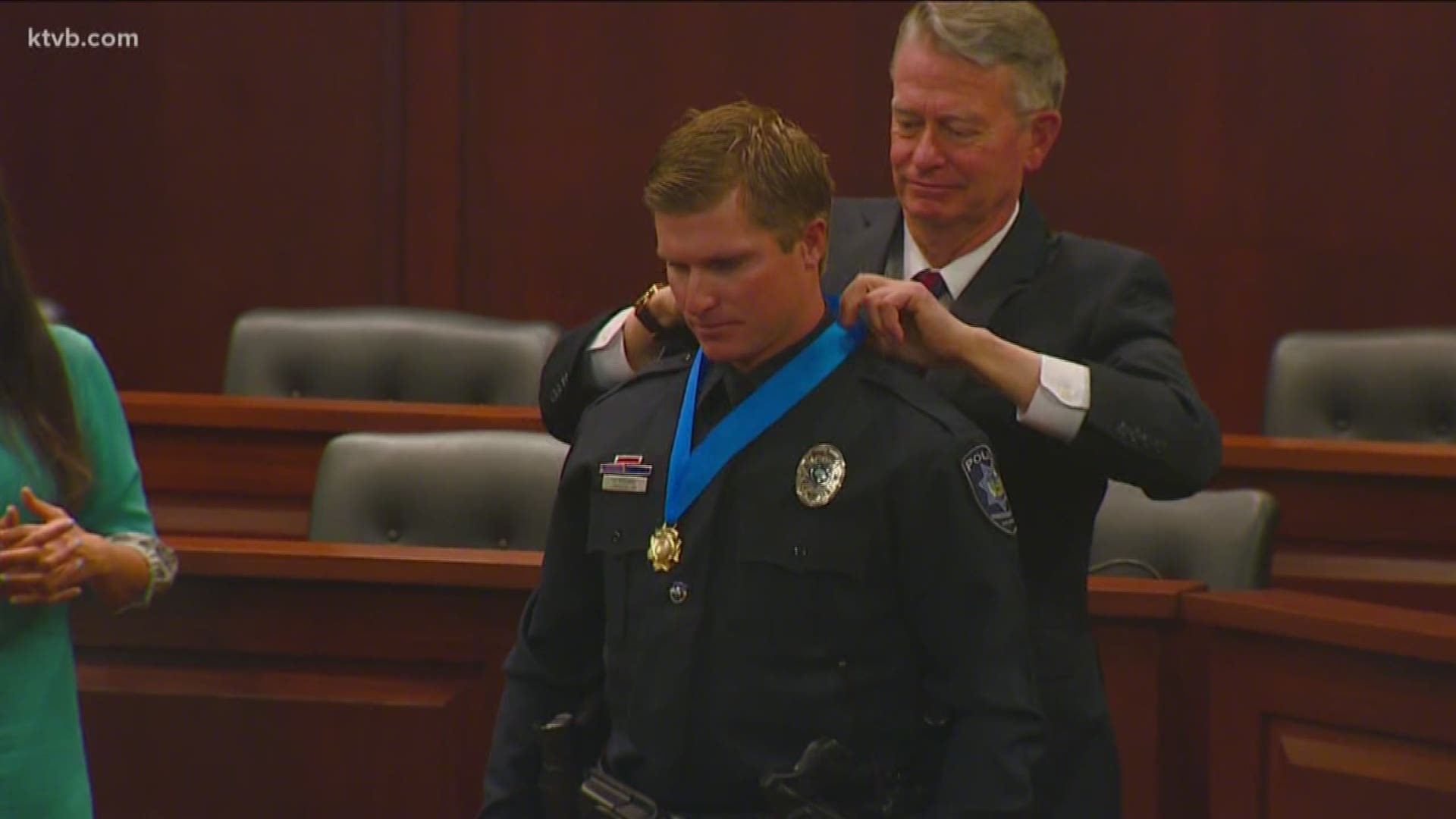 BOISE, Idaho — Idaho's Medal of Honor was awarded to six officers on Wednesday, and all of them are from the Treasure Valley. It's the state's highest honor for any first responder.

"You have served in the highest traditions of Idaho law enforcement, and for that each of you is truly deserving of this distinct honor,” Idaho Attorney General Lawrence Wasden said about the six recipients.

Five deputies with the Ada County Sheriff's Office were honored for their actions from an incident that happened in September of 2017.

That night, three people died. Deputies responded to a house south of Meridian after reports of a break-in that ended with a house engulfed in flames.

An elderly woman who lived in the house and one other person perished in the burning home. The deputies pulled Lily McAlister and her husband, Scott McAlister, to safety. Scott ended up dying later from his injuries at a hospital in Salt Lake City.

The five deputies who were honored for their actions were: Sgt. Carlos De Leon, David Anderson, Derek Beardall, Michael Geisel and Vishal Sahni.

De Leon talked to KTVB about what it meant to him to receive this award in front of his family.

"I think they're extremely proud, I have a son that is a Scout, and my daughter who is in high school as well. I can see in their faces the excitement,” he said. “Being here and having the governor and the sheriff and chief of police present and giving their dad and awarding him a medal is quite an experience for me.”

While he was one of the recipients for the award, he placed the credit on the other deputies who acted that night.

"I am extremely proud of the men I worked with that night, those guys did a fabulous job,” he said. “When it was time to act and go forth and get the people out of the house, the men that stood behind me that night acted without any hesitation."

In addition to the five deputies, a Meridian police officer, Kyle Mikowski, was honored for his actions from last July, when he returned fire on a suspect after being hit.

"I was shot in both legs, in the calf area,” Mikowski said.

ALSO: Meridian officer to be awarded Idaho Medal of Honor

In 2018, officer Mikowski chased a suspect from Meridian to Boise in a car, then continued on foot. At one point he deployed his Taser, but the suspect shot and hit Mikowski in both legs. The officer told KTVB he still thinks about that day.

"Every day, every step I take I still feel it. It's nothing that brings me down,” Mikowski said.

He said he was looking forward to this day since he knew his friends and family were going to be there to witness him accept the award.

"I kind of look at it as though I'm accepting it on behalf of my family, my wife and daughter and my mom and my dad,” he said. "I'm really humbled by it, it's a big deal to be recognized for something like this. 'Specially something so big, the state of Idaho gives to these first responders and law enforcement that do these actions within their job."

Mikowski had to recover from his injuries before he was able to return to duty. He said making that decision to come back to patrol wasn’t an easy one.

"The whole thing about actually putting the uniform back on and coming back to work it was a pretty difficult thing but it was something I knew I had to do,” he said. "You have to face your fears and you have to rebuild the confidence and get back into your routine of doing what you used to do."

The six men honored on Wednesday joined 57 other first responders to be awarded the Idaho Medal of Honor since its inception back in 2004.