The measure would end restrictions across the state, but would also strip Idaho of eligibility for $117 million in emergency federal funds. 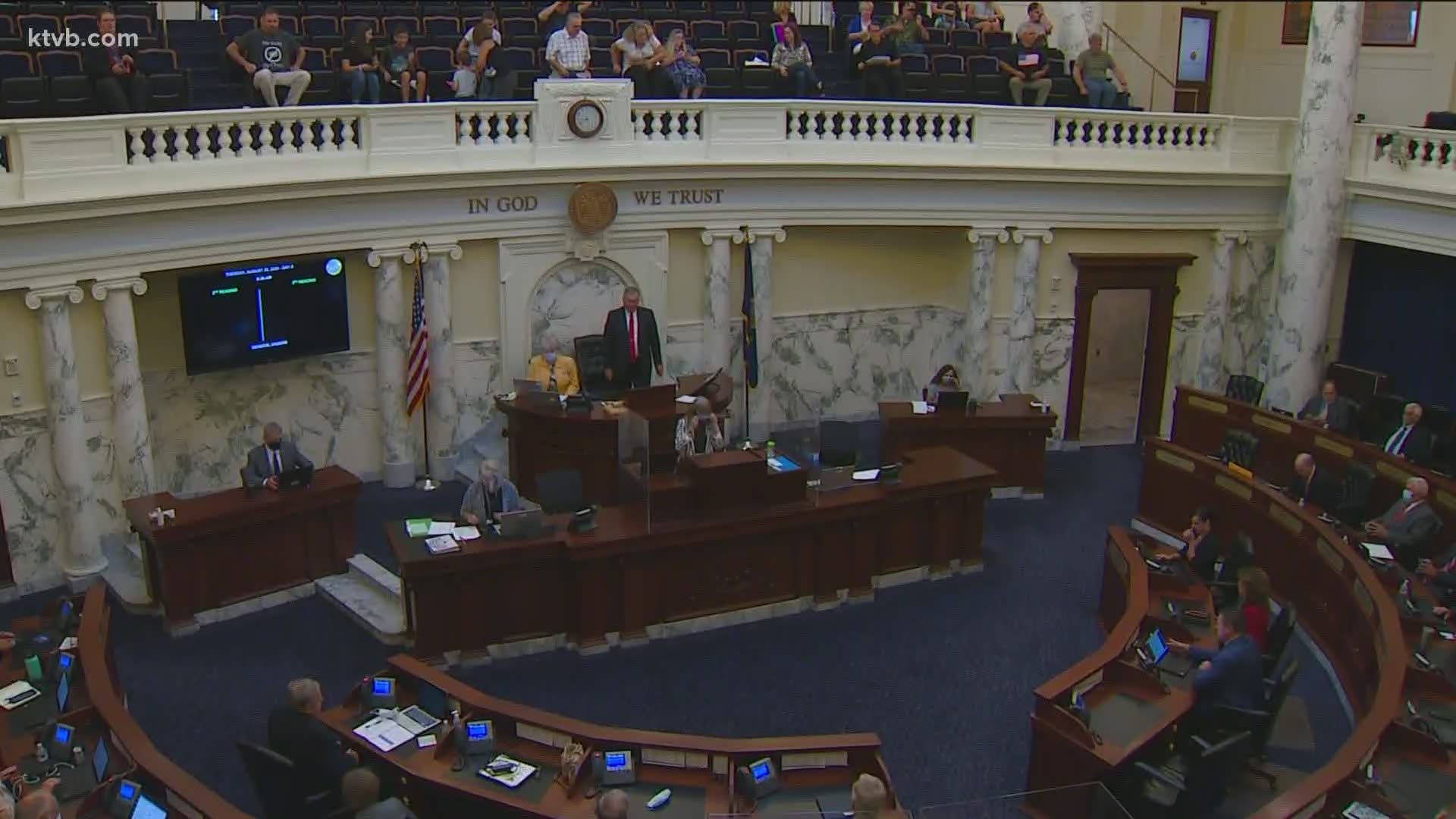 BOISE, Idaho — Editor's Note: The resolution did not come up for a vote in the Idaho Senate after concerns were raised about its constitutionality. The measure is therefore dead and did not go into effect.

Lawmakers voted Tuesday to advance a resolution that would end Idaho Gov. Brad Little's coronavirus emergency declaration, a move designed to lift restrictions across the state that would also strip Idaho of its eligibility for some federal emergency aid money.

The 48-20 vote came despite concerns voiced by some members that such a resolution was in violation of the state Constitution and outside the scope of the special session, during which legislators are required to adhere only to the subjects on which it is called. Little called the session to address the upcoming election and limiting civil liability connected to the pandemic.

Rep. Steven Harris, R-Meridian and the sponsor of the resolution, said Little's original declaration of emergency was intended to ensure that COVID-19 cases did not outstrip Idaho hospitals' ability to care for patients. Hospital capacity has remained more than adequate since the pandemic began, Harris said, but the governor's declaration and stay-home order caused "extensive collateral damage" to citizens.

Rep. Christy Zito, R-Hammett, agreed during the debate that restrictions should be lifted, saying she was disturbed by some of the precautions related to the pandemic.

"It is time to return to normal. Not a new normal, to normal," she added.

Other lawmakers warned that by suspending the emergency declaration, Idaho will lose out on funding to fight the spread of coronavirus. The resolution would not impact CARES Act money, but would make Idaho ineligible for funds from FEMA and some other federal programs.

Rep. Brooke Green, D-Boise, said that the $117 million that Idaho would be leaving on the table is money intended to provide personal protective equipment for healthcare workers, as well as help keep long-term care facilities and hospitals afloat.

"We're at a critical junction, and we are not over this looming crisis. In the coming months, we don't know what this is going to throw our way," she said. "But to prematurely revoke this declaration, and to not provide that resource that FEMA funding for communities - We have an obligation to provide for our communities and part of that is ensuring we have all resources available to us."

Rep. Ilana Rubel, D-Boise, said the fact that the death toll is not as high as projected and that hospital capacity has not yet been strained should be taken as evidence that the governor's declaration and restrictions were effective in slowing down the virus' spread.

She likened getting rid of the emergency declaration because the situation was not worse to "throwing away your umbrella during a rainstorm because you're not getting wet."

"I'm very reluctant, given the economic straits we're in now, to turn our noses up at $117 million that could be pivotal in pulling us out of this," she said.

House Majority Leader Rep. Mike Moyle, R-Star, said that Idaho should not be relying on those federal funds anyway.

He said that people need to reject that fear, and expressed surprise at church pastors in the state who have canceled services out of concerns about COVID-19 spreading through their congregation.

In contrast, Remington, said the North Idaho church at which he is a pastor - "a smaller church, close to 1,000 people total" - is open.

"I've actually laid hands on people that have COVID and prayed for them. I never got COVID," he said.

The resolution, which would end the state of emergency immediately upon passage, can be read in its entirety here.

It does not appear to block the governor from being able to declare another state of emergency and put restrictions back into place if it passes.

The measure will head next to the Idaho Senate, which has not yet indicated whether legislators there will take it up.

An analysis on the House Concurrent Resolution was done by the state's Attorney General's Office for Rep. and Senate Pro Temp Brent Hill. The analysis found that it does not fall in any part of topics allowed to be addressed in Gov. Little's special session and would likely not carry any legal weight if it were passed by both chambers. You can read the report below: