One part of the bill limits the governor's emergency declarations to 60 days unless extended by the Legislature. 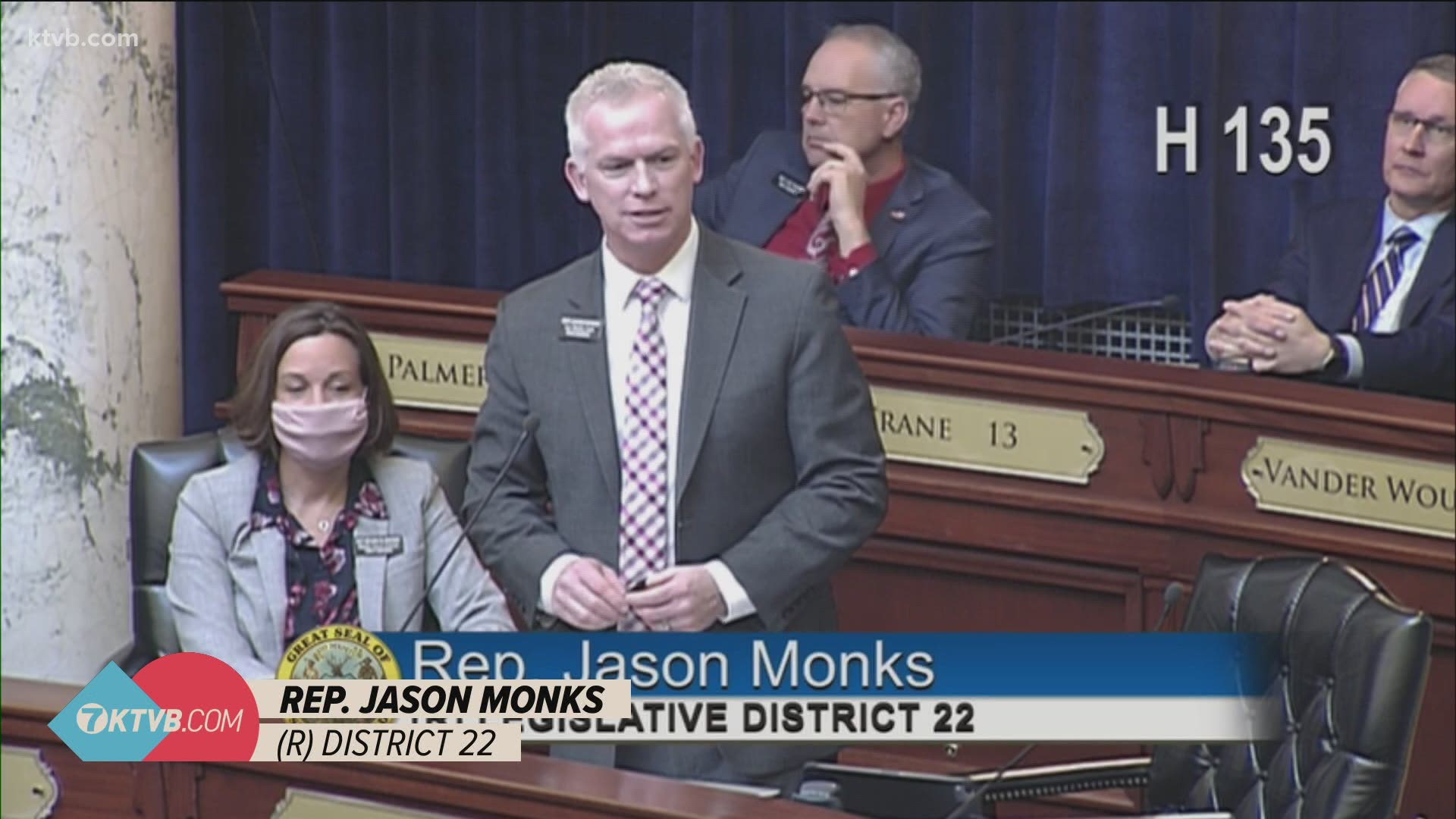 BOISE, Idaho — This story was originally published in the Idaho Press.

After much debate, the House has voted 49-20 in favor of HB 135, the bill to restrict the governor’s emergency powers, including declaring all jobs “essential,” limiting emergency orders issued by the governor to 60 days unless they’re extended by the Legislature, prohibiting the governor from suspending any laws during an emergency, and more. The bill now moves to the Senate side.

House Minority Leader Ilana Rubel, D-Boise, warned of “some really dangerous unintended consequences in terms of the ability to respond.”

The bill had been on the House's 2nd Reading Calendar, which means that without suspending rules, it couldn't have come up before tomorrow. It takes a two-thirds vote to suspend House rules; the vote was unanimous.

When Monks was abruptly called on to present the bill to the House today, he said, “I was just telling the good gentleman next to me that it would’ve been nice to have a little bit more warning on time to prepare, but I was told that sometimes I do better without preparation. I’m not sure if that was a compliment or not, but here we are, and that’s OK.”

Monks said the legislation sets the length of an emergency disaster declaration at 60 days rather than the current 30, “because frankly, 30 days was not enough to get the job done. … Sixty makes it a little more comfortable there as far as being able to initiate that process, get the responses back from FEMA, and put that into place,” he said. “It allows declarations to run without having to re-up them every 30 days or 60 days, provided that the declaration is only necessary for receiving federal funds, resources or benefits. So if there are restrictions placed during that time, or rules that have been changed with that emergency declaration, those will expire after 60 days.”

Currently, the governor can extend an emergency declaration. The bill removes that ability, saying, "The governor may not circumvent the 60-day limitation by redeclaring successive states of disaster emergency for the same emergency in the absence of an extension by the legislature.”

“This legislation does not address all of the concerns that everybody has in this body or our constituents as far as the response to this last year’s coronavirus, it doesn’t do that,” Monks said. “I wish it could. There’s many sections of code, there’s many powers granted to various agencies, individuals, organizations. Those are all different. This addresses only part of that, and this is to me a start on what we need to do and what we need to fix... I think it’s a fair approach to addressing future emergency declarations.”

Rep. Julianne Young, R-Blackfoot: “There’s been a lot of hours of work put into this bill,” she said. “I know that there’s been some reports in the media that this is a power grab by the Legislature. This absolutely is not a power grab. And this concept that we seem to have accepted that the executive branch can rewrite law is very concerning. Our Constitution delegates that legislative authority exclusively to the Legislature. And to me it flies in the face of reason to believe that you can write a law that gives someone the authority to suspend all laws. That kind of authority can’t be found in statute. If it exists, it must be found in our Constitution. And it does not exist in our Constitution, the Constitution specifically places that authority with the Legislature. So I think that was a very dangerous precedent. And if this legislation did nothing else but clarify that the executive branch may not suspend law, I think we will have gained a great deal of ground.”

Rep. John McCrostie, D-Garden City: “It goes without saying that we are in an unprecedented time in human history. And as we have entered this initially with the actions that were taken by the gentleman on the 2nd floor (the governor), there were only two things that could happen. One is that he didn’t do enough. And if he didn’t do enough, then our people would be genuinely suffering. Or he could’ve done too much, and then we would be complaining that he has done too much. And I would rather have been on the side that he had done too much than too little. Throughout this whole process, I’ve told folks in my community: Let’s extend each other a little bit of grace. I do not fault the gentleman on 2nd floor for any of the efforts, and I think that some of the outcry that we have heard from folks in all of our communities across the state, I think they’re genuine, I think they’re real, I think they’re heartfelt. At the same time, I’m not going to fault the good gentleman for his actions to protect our state. I don’t feel that this is a piece of legislation that is necessary.”

Rep. Brooke Green, D-Boise: “While I recognize the need to be able to put limitations on how we respond to emergencies, especially in light of the year that we’ve had, I’ve had the privilege of standing with some of our first responders responding to actual emergencies and having to make very decisive decisions at the moment those emergencies are occurring. 2017 is a phenomenal example,” she said. “I trust those whom I stand shoulder to shoulder with addressing and ensuring that our roads, our rivers, our banks are secure and our communities are secure. While I recognize this body at times certainly puts forward good legislation, makes good decisions, at other times we are our own barriers to being able to respond. In an emergency, I want to look to my colleagues, I want to look to my first responders, and I want to look to those who are with me having to make those decisions, to make the appropriate and fast and decisive decisions to save our communities, our roads, our infrastructure and our families. So with that I will be voting no against this bill.”

Rep. John Vander Woude, R-Nampa: “It should never be that one person can decide whether your job is essential or not,” he said. “I was fortunate with my son that all three of his businesses were essential, and so he was able to keep going. But every business that you have and every job that you have is essential to you, it’s essential to your income. I’m a little tired of everybody saying, well, this great recession. It wasn’t a recession, it was a government shutdown. The government shut down all the businesses, and then claimed that we had a recession. It’s time that we make sure that every job is essential to the person who has it, it’s their income, it’s their livelihood. If they have a business, then that business is their livelihood, and we cannot take that away from them.”