"I'm very thankful for the help from the Legislature, from all the people all over the state," the first-term Republican governor said on Wednesday. 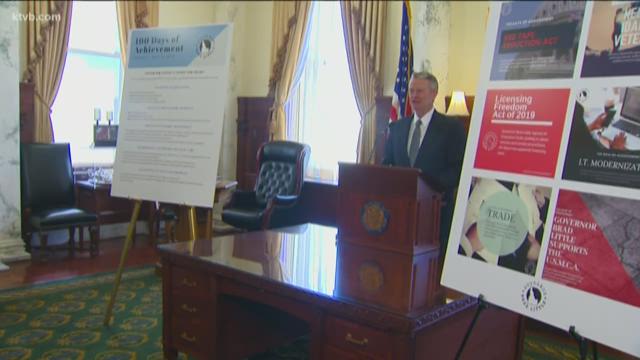 As first-term Republican Idaho Gov. Brad Little marks his first 100 days in office this week after replacing former Gov. Butch Otter, he celebrated his achievements Wednesday during a news conference in Boise.

Gov. Little talked about the advances made during those 100 days, including the period for January 7 through April 16 - five days after the end of the 2019 legislative session.

Little highlighted investing in public education, expanding access to health care and scaling back regulatory burdens at the event.

"I'm very thankful for the help from the Legislature, from all the people all over the state," Gov. Little said. "Another part of my base was what do we do as far as better opportunities for our kids: better jobs, better incomes, and obviously a lot of the work we did in the regulatory arena, I think, is going to pay off over the years."

On regulations, the governor issued executive orders requiring state agencies to eliminate or scale back two rules for every new one they propose - and putting limits on future occupational licensing laws.

Little looks ahead to next year and talks more about the big issues of his first 100 days - including education, Medicaid expansion, and this spring's flooding - in an interview on this week's edition of "Viewpoint." Watch it at 6:30 a.m. Sunday, April 21, on KTVB.