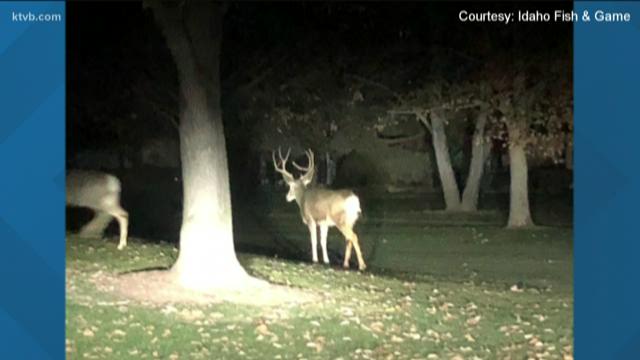 BOISE, Idaho — Investigators with Idaho Fish and Game say a deer was killed on Tuesday in southeast Boise's Baggley Park. They think whoever did it, took the deer with them.

The agency made a call out to the neighbors in the area, specifically living on Crosscreek Lane, to go through their security cameras and see if they saw anything suspicious from Tuesday.

After getting some information and video from some neighbors, the agency is looking closely at a dark colored Jeep Wrangler with a brush guard. It was seen driving in the area right around the time they think this deer was shot.

"This case is gotten a lot of attention from folks and there are some people that are pretty upset about it, and they should be,” Idaho Fish and Game Spokesperson Evin Oneale said. "It's kind of an unusual one in that it occurred in an urban area, those deer are wild animals, but there are a lot of people that form attachments to them."

The poaching occurred in the early morning hours on Tuesday, and since Idaho Fish and Game put out the information to the public, several tips have come in. Including the one on the Jeep Wrangler driving near the park around 2:05 a.m.

“We're still following up on that like I said the info we got from another concerned citizen has generated some additional information that's been really good for us,” Oneale said.

The agency posted photos of the deer they believe was poached to their website.

“We don't know for sure, we hope to know more soon but it was just a hunch,” Oneale said.

The investigation started after a citizen found a pool of blood at the park and called it in. An officer was sent down and found a trail of blood leading away from the pool of blood and to a neighborhood.

“He followed that drag trail out to a cul-de-sac at the northeast end of the park, where it was obvious that someone had loaded a deer into a vehicle,” Oneale said.

Fish and Game officials said whoever killed the deer used a bow and arrow.

“There was also some patches of hair, and a patch of skin and that was consistent with an arrow wound,” Oneale said.