Firefighters across the state will see some changes in procedures due to the ongoing COVID-19 pandemic. 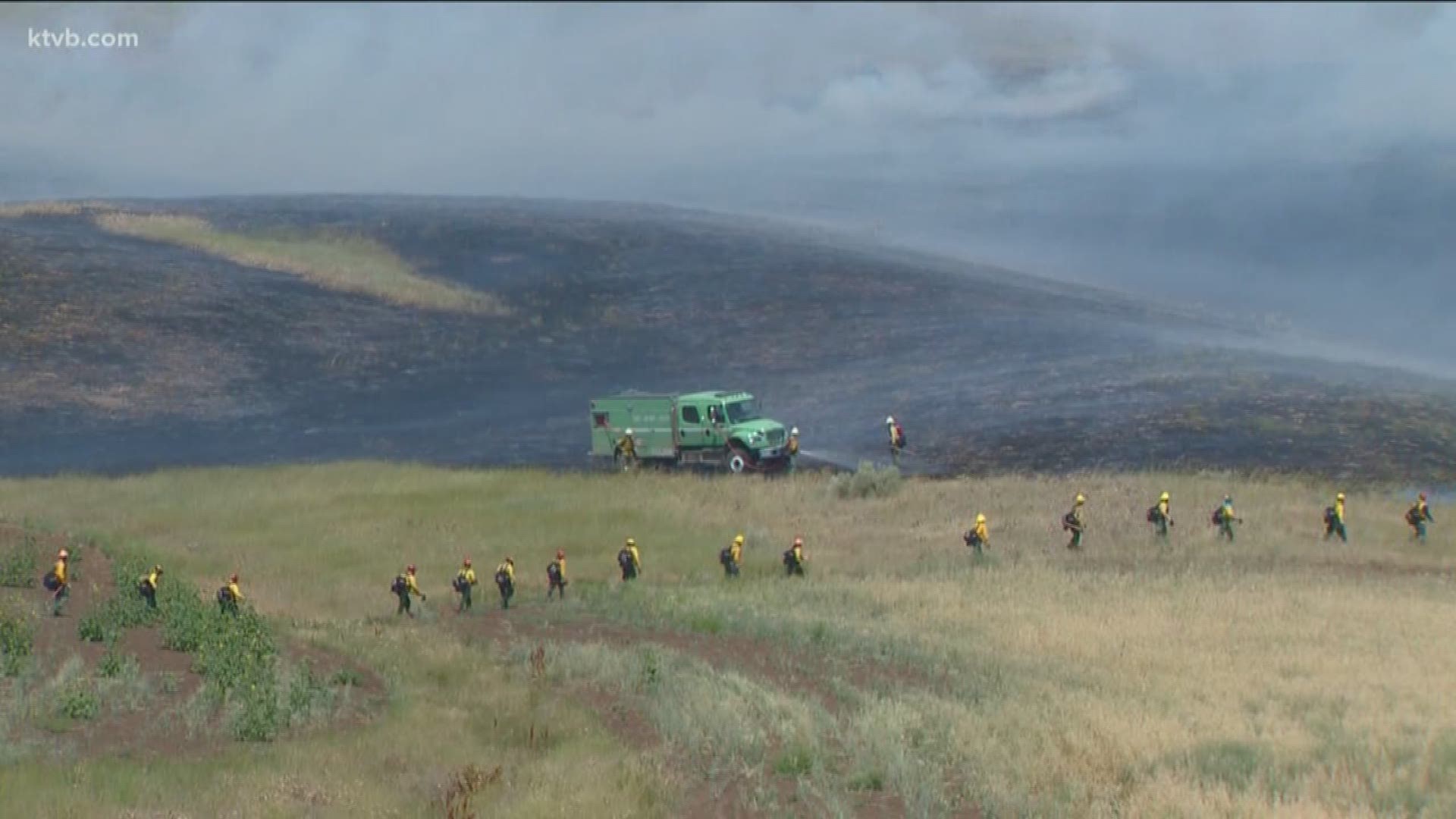 BOISE, Idaho — Idaho's fire season is already underway and is expected to increase in activity over the coming weeks.

The National Interagency Fire Center in Boise is predicting an above-average fire season for 2020, meaning more activity than a normal year.

“Our predictive services unit at the NIFC, they study the weather, they study the vegetation out there, and they do predict that we could be seeing above-normal fire activity in Idaho as early as July,” said NIFC spokesperson Jessica Gardetto.

Officials with the Bureau of Land Management in Boise predict the same. Andy Delmas, a fire management officer, said the state is already seeing a few significant fires and that's expected to pick up through July and August.

“In cheatgrass country of southwestern Idaho, we’re going to see fires,"  Delmas added. "We could even see them later this week with temperatures increasing and increased winds."

Firefighters in Idaho will not only be fighting increased activity in 2020 but also the COVID-19 pandemic.

"We've created what we call wildland firefighting response plans and those plans outline how we're going to respond to fires during the virus," Gardetto said.

Those plans were developed over the last couple of months for state and federal fire agencies.

"I don't think you'll see a lot of change in how the crews fight fire and how they respond on the ground," Delmas said.

The BLM will still be putting as many resources on each fire as is necessary and available.

But while the firefighting itself doesn't change, other procedures will.

"It has changed how we train, how we get together and how we're going to brief our crews," Delmas said. "You won’t see fire camps with big groups of firefighters anymore. We’re going to space those folks out. We’re going to deliver food to them so they don’t have to come into camp and come in contact with other folks."

Gardetto said NIFC policies are the same, with the goal being to keep a potential outbreak from spreading through an entire camp.

When it comes to crews on the ground, it's not feasible to try and limit the number of firefighters - they still have a job to do.

“Social distancing is something that fire crews aren’t really going to be able to do when they’re out actually on the fire line," Gardetto said.

However, crews will be as limited as possible in their exposure to others.

“We’re also working with our crews so they can operate as ‘family units’ – much like how families have been operating during the COVID virus," she said. "So our fire crews are really being careful about who they interact with outside of their crew to really limit that potential spread of infection."

According to Delmas, crews will be also be asked in some cases to limit their public interaction outside of work.

One of the biggest changes that the public will probably notice is how fire crews communicate with local communities. Firefighters have to think about their own health, as well as the health of residents in the communities they're protecting.

Delmas also told KTVB that crews will have routine temperature checks, when feasible. And crews are being told if they're sick, don't come to work.

As for out-of-state crews, both Gardetto and Delmas said those operations won't change.

Wildland fire operations are based on mobility and being able to move resources around to wherever they may be needed.

“Nobody has enough to fight peak fire season in their area," Delmas said.

Because of that, Idaho will still send and accept crews from other states, when needed.

“The BLM and its partners will be moving fire crews to wherever [fires] may be in the country because, despite a pandemic, we still have to respond to fires,” Gardetto said.

Each year, according to NIFC, 80% of wildfires are human-caused. Because of that sobering statistic, Gardetto urges the public to do their part to be extra cautious with anything that could potentially spark a fire.

Here are some tips for how you can help to prevent wildfires at home, while traveling, and while recreating on public lands.

RELATED: How NIFC is preparing for fire operations during coronavirus