Ice dams can cause serious damage for home and business owners - hence the mobilization to Idaho of a Minnesota-based company called Ice Dam Guys. 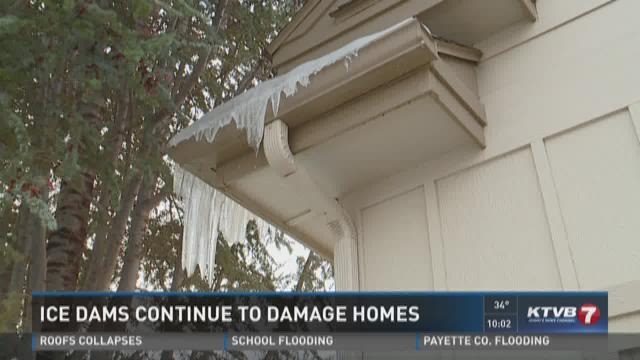 ADA COUNTY -- As you have no doubt noticed, this warmer weather is melting a lot of snow and ice off your roofs, but KTVB's Rick Lantz tells us this warming trend is fleeting.

That means one major problem many of you are dealing with probably won't be going away anytime soon.

KTVB brought you a story in the beginning of the month about the process in which ice dams form, and how they are a rarity in our area.

The thick layer of ice build-up can cause serious damage for home and business owners - hence the mobilization to Idaho of a Minnesota-based company called Ice Dam Guys.

"In our bedroom, we were getting ready to go to bed, then all the sudden 'drip, drip, drip.' Where is that coming from? And then it started coming down very very fast," Meridian resident Connie Miller said.

The leak soaked parts of the Millers' master bedroom ceiling, wall and carpet - all thanks to ice dams that have been forming on their roof for quite a while.

"Right up along the gutters is where an ice dam built up and that's of course where icicles were hanging," Miller said as she showed KTVB their roof.

Ice Dam Guys says when you have a lot of snow on your roof, and it starts to melt because of warmer temperatures inside or outside your home, it travels down to the eave (edge) of your roof and freezes, thus forming an ice dam.

Whenever snow melts on your roof - as it is now - it then gets trapped behind the ice dam, and can work its way underneath your roof shingles.

"A lot of the leaking and house damage is right about now, [that's] when you're going to see the worse problem," Ice Dam Technician Anthony Phinney said.

In the middle of the night, the Millers grabbed buckets of hot water, climbed on their roof, and slowly poured water along the dam. But the biggest trouble for them wasn't the ice dam on their overhang - it was the ice dam in their roof valley on the second story.

So Monday morning they put a hose on the roof - melting that dam in the roof valley - got an extension pole, and broke off the chunks of ice.

"We hooked up the hose to the washing machine... and then you can just pull the lever... and hot water goes out," Miller added.

You do have to be careful when considering attempting this process, as roofers say this isn't the best move for every house and adding more water can, of course, add to the leak.

Like many homeowners, the Millers didn't know they had a problem until it was too late.

But, there are other solutions: Ice Dam Guys say low-pressure steam to melt and cut off the ice is the safest and most effective way.

"We go up there, remove snow of the roof, expose the ice dam, use a machine to basically just steam and melt ice away off the roof," Phinney explained.

Ice Dam Guys say don't hammer or chisel ice dams because that can cause more harm than good to your gutters and roofing.

There are a few things you can do to prevent ice dams: seal up any air leaks into your attic because good ventilation and insulation are key.

But first and foremost, the best thing you can do is get all the snow off your roof. If possible, buy a roof rake or shovel and do it yourself or hire a snow removal company to do it for you.

Another tip: stuff calcium chloride in a panty hose and lay it across the ice dam, making a path for the water to melt.

Ice Dam Guys charge hundreds to thousands of dollars for their service, depending on the size of the job. They say with the weather we're having in the Treasure Valley, they are going to be around for a while.

To learn more about their business, head to their website.