Wildland firefighters throughout southern and central Idaho are bracing for severe fire weather this week. 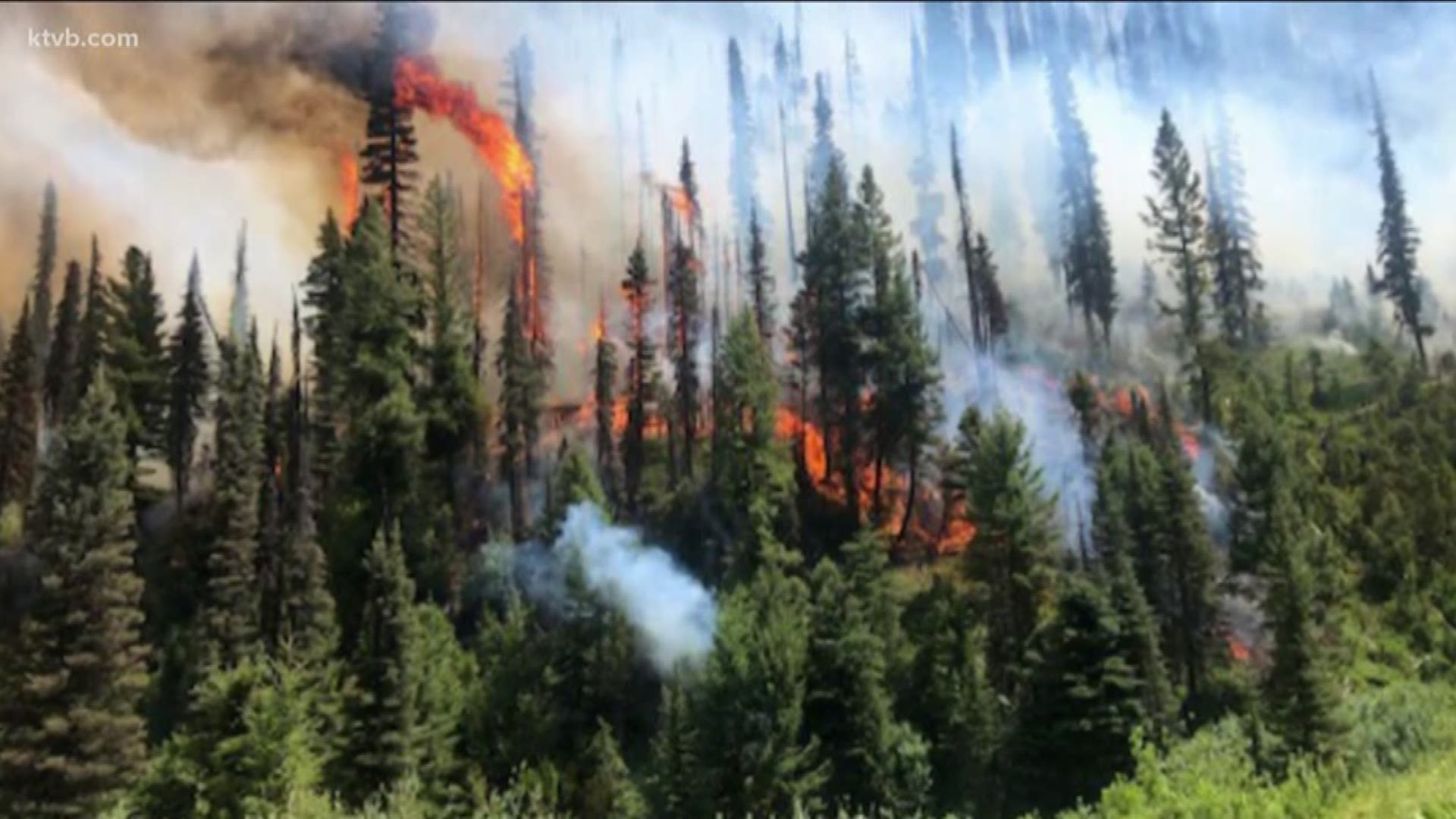 BOISE, Idaho — Wildland firefighters throughout region are bracing for high winds and possible lightning storms over the next couple days.

The expected winds and storms - combined with hot temperatures and dry fuels - prompted the National Weather Service on Tuesday to issue a Red Flag Warning for much of the southern Idaho region.

Increased risk of fire danger means wildland fire crews will be on the lookout for new fires, while also working to make sure existing fires don't grow dramatically.

Here is a look at major wildfires currently burning in southern and central Idaho, and eastern Oregon:

A fast-moving wildfire burning on the Idaho National Laboratory site near Idaho Falls exploded in size Tuesday, growing to more than 90,000 acres.

The Sheep Fire started Monday evening with a lightning strike, and is burning south of Highway 33 and north of Highway 20. As of Tuesday evening, highways 20 and 26 are open in all directions, but drivers are urged to use caution due to smoke blowing across the roadways.

INL announced Tuesday that "all non-essential employees" were being evacuated from multiple facilities as a precaution after changes in wind and fire behavior.

But by Wednesday, fire managers said the fire had grown to more than 110,000 acres - or 172 square miles - but a shift in the wind moved the fire away from INL's nuclear facilities.

Non-essential employees were not working on Wednesday while crews continued to battle the fire. Operations were expected to return to normal on Thursday.

Fire officials have not released a date of containment.

The Vader Fire was first reported on July 19 and is located about 14 miles northwest of Stanley, south of Highway 21 on the Middle Fork Ranger District. The fire, which is burning in lodgepole pine in heavy dead and down fuels, has so far scorched 436 acres and is 32% contained. The cause of the fire remains under investigation.

Highway 21 is now open through the fire area with a reduced speed zone of 45 mph. Drivers are urged to use extreme caution when traveling through the Cape Horn area. Firefighters are working directly adjacent to the highway.

Like the Vader Fire the Canyon Fire also burning along Idaho 21. It is located southeast of Bull Trout Campground and 14 miles west of Stanley, within the Lowman Ranger District. The lightning-caused fire was reported at approximately on July 14. It has burned 324 acres and is 71% contained as of Wednesday afternoon.

Fire officials say crews are continue to secure, patrol and monitor lines for flare-ups along all sides and particularly along the northern flank near the West Fork of Canyon Creek.

The lightning-caused Shady Fire was reported the evening of July 10, and is located about two miles east of Seafoam Guard Station in the Frank Church River of No Return Wilderness on the Middle Fork Ranger District. As of Wednesday afternoon the fire had burned 1,964 acres.

Managers say fire activity increased Monday, primarily on the southwest border. The fire has moved into an unnamed drainage north of Silver Creek, and the fire's southwest edge has burned into the 2012 Halstead fire scar.

Because of heavy fuels, active fire behavior, and the presence of numerous snags, firefighters have been unable to directly engage the fire. It's being managed with a point protection strategy - which protects highly valued resources from the wildfire without directly halting the continued spread of the wildfire.

The Lookout Point Fire is burning through grass and brush about 25 miles northwest of Murphy Hot Springs, near Bruneau Canyon.  Estimated at 8,000 acres, there are no estimates for containment or control of the fire. No structures are threatened.

The Hot Springs Fire is located about 25 miles north of Murphy Hot Springs near the Bruneau Canyon. It has burned about 11,300 acres in brush and grass as of Wednesday afternoon. No structures were threatened.

The fire was contained Tuesday night. BLM officials hope to have the fire controlled by Thursday evening. Lightning is suspected as the likely cause of the fire.

The 1,300-acre Lava Fire is burning three miles northeast of Shoshone. There are structures in the area, but none were threatened as of Wednesday. It is believed lightning sparked this fire. BLM officials hope to have the fire contained by Thursday evening and controlled by Saturday evening.

Vale BLM fire crews have been busy in Malheur County since late Monday night as lightning activity rolled in from Nevada. In addition to two fires identified Monday, firefighters have been battling four new fires from Tuesday's lightning activity, as well as responding to numerous strikes and potential starts throughout the day.

As of Wednesday afternoon, crews were mopping up the last two of the seven fires:

At this point, no roads have been closed, no private property has been lost and no injuries have been reported.