Before the Homedale Trojans played the Baker Bulldogs, the school presented Kenneth Olsen's wife, kids, and family with gifts in Olsen's honor. 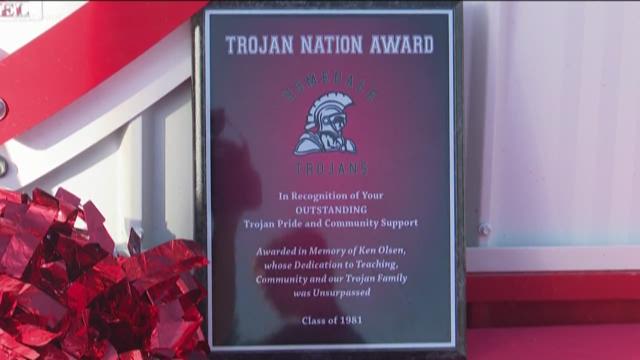 Olsen was killed in August after a pickup truck hit him while Olsen was riding his motorcycle on Highway 19.

Olsen taught at Homedale High School for 21 years and graduated from there in the 1980s. He and his family were honored prior to kickoff. Over the years, he developed deep connections throughout the community and school. Because of that, the high school principal says Olsen was the ultimate Trojans fan with a lot of school pride.

Casey Grove, Homedale's athletic director, told KTVB that Olsen never missed any sporting event and was always there to cheer on the Trojans.

Before the Trojans played the Baker Bulldogs, the football team surrounded Olsen's wife, kids, and family on the field. The school presented the family with flowers and a certificate of appreciation to honor Olsen.

The school built a shadowbox to remember Olsen, which will now hang in the field house. The school also made an award for "Outstanding Trojan Spirit and Community Support," which will now be named in his honor and presented to one person each year who shows outstanding dedication to the school, just as Olsen did.

Students and staff told KTVB that Olsen cared about the school and every single student who attended.

"He was always vocal, rah-rah on the sidelines and rooting Homedale on all the time and just his presence walking around the athletic events," Grove said. "He never hardly sat down, he was always pacing around the track or the gym or wherever he was at, so it definitely is going to be a big void missing at our sporting events."

"I was supposed to have him this year as my consumers' math teacher and I was really looking forward to his class because whenever I needed help he always took time to explain everything and he was just really cool, really nice. I just love how much he cared," said Homedale senior Christina Guzman.

According to students and staff, Olsen also attended every extracurricular event and school fundraiser. They also say Olsen will be greatly missed and the school year won't be the same without him.

“He made a really big impact on everyone that he taught so it definitely is going to be weird [without him]," said sophomore Cassandra Guzman. "I'm really going to miss him a lot."