The Idaho Transportation Department announced on Sunday night that both lanes will soon be reopened. 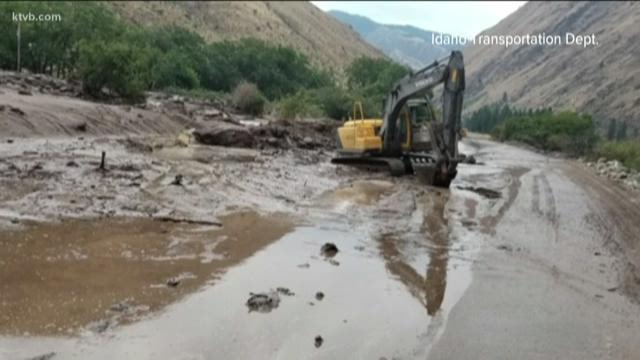 BOISE, Idaho — Update: The Idaho Transportation Department announced on Twitter that both lanes will reopen on Sunday night.

After a series of storms dumped over an inch of rain in central Idaho, a series of mudslides forced nearly 70 miles of Highway 95 to close down on Friday night. Now, one lane of the highway was been cleared of water and debris, which is welcomed news for those stranded by the closure.

The Idaho Transportation Department says this started after the small town of Riggins reported that they were receiving large amounts of rain.

The National Weather Service says the storms brought between one to two inches of rain on Friday night, which caused Fiddle Creek to overflow its banks. The overflowing creek created a new channel with mud, rocks and power lines.

ITD says crews are continuing to clear a 200-foot section of debris that was about four to five feet deep.

With the one lane of the highway reopened, drivers can begin traveling up and down the highway.

"For now, drivers can expect a pilot car to take them through the zone, it will look like two lanes but for now we still need that second lane to work on emptying the ditches so if we get any more rain we don't get another mudslide that shuts down the road," Megan Sausser with ITD explained.

This is news that Scott Harris and his family have been waiting for.

Harris, who lives near Khamia, says his wife, 15-month-old daughter and 12-year-old son were driving back from Las Vegas when they got stuck in Riggins due to the mudslide.

"Gosh, they were in the car nine hours that day and so then to get to Riggins and find out that they can't make it the last hour to get home it's frustrating but then when there's no rooms to be had, that can create a bad situation for anyone traveling that route," Harris said. "Not knowing exactly when they can get home, that's not fun."

He said that his family had a tough time finding a hotel because of how many other people were stuck in town because of the highway closure and due to a large rodeo in town.

Harris said his family was able to stay at a friend's home in McCall and that if the highway didn't reopen, they would have to find an alternate way home - which would turn one hour of driving left into a ten-hour detour.

Crews will continue to work through Saturday night to reopen the second lane of the highway.