KTVB got an inside look at three separate heroic efforts. 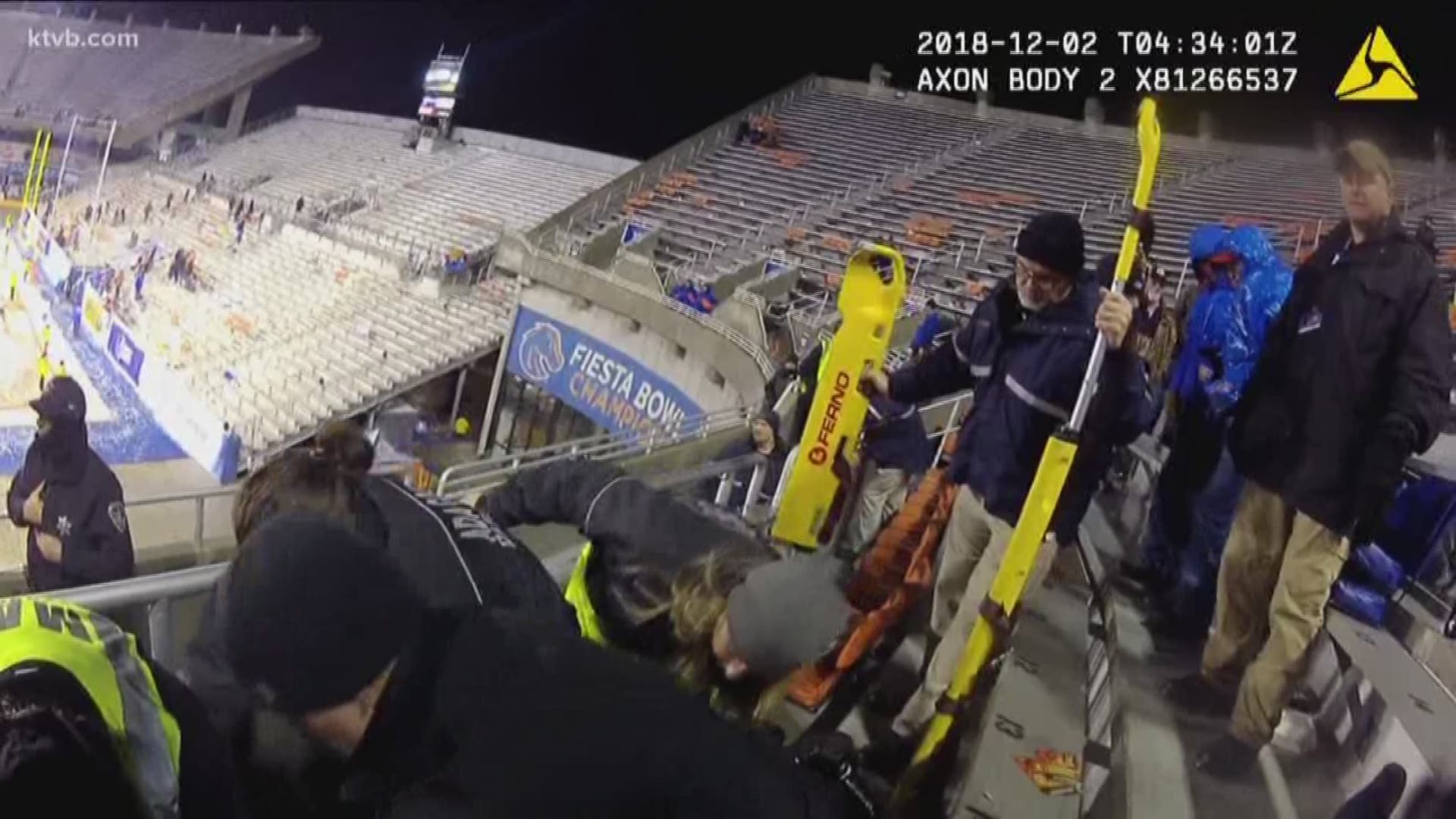 BOISE, Idaho — The Boise Police Department’s mission is "to protect, serve and lead our community to a safer tomorrow." Although most people have heard their mission before, it’s not everyday that we get to hear about how far officers go to help those in need. For the first time, KTVB Is getting an inside look at three of those heroic efforts with never-before-seen body cam footage.

On December 1, 2018, while some 30,000 people were at the Mountain West Championship game watching the Boise State Broncos take on the Fresno State Bulldogs, four Boise police officers and Ada County paramedics were working to bring a man back to life.

Sgt. Chris Davis, Det. Chuck Roath, Ofc. Rob Rainford and Det. Dustin Robinson were all on duty that night. The victim, Keith Jones had a heart attack while watching the game inside Albertsons Stadium. The first responders immediately began CPR, but there were some challenges.

“In the upper deck, as you can imagine, the bleachers were less than a foot wide and that's where we're doing CPR, so we have him laying down on the bleacher and we're trying to be on both sides of him to try and get the best chest compression,” Davis said.

The challenges didn't stop there.

“We had to get him from there all the way down to the field, which is where the ambulance was,” Davis said.

“We don't always see great outcomes in the stuff we deal with so to do CPR on someone and actually see them several months later being completely fine is almost impressive,” Rainford said.

Today, Jones is in good spirits and thankful.

“Between those four men, and God, I’m here,” he said. “I coded, you know, I went dead three times and they kept bringing me back and I’m just lucky.”

The officer's actions earned them BPD’s Lifesaving Award. An award that Jones presented to them.

“You never get in this to get recognized," Robinson said. "That outcome was all the recognition that we needed."

Credit: KTVB
Keith Jones hugs the officers that helped to save his life at a Boise State football game.

Off-duty officer and lifeguards save man who nearly drowned

This past August, Alex Schnider was swimming laps at the Boise State Aquatics Center, when he blacked out.

“The next thing I know, I wake up maybe like four or five days later in the ICU,” Schnider said.

Thankfully, he wasn't alone on that fateful day.

“I think I just kicked into action and said 'hey we need to go help him,'” said Boise Police Cpl. Tim Beaudoin.

He was off-duty when he saw Schnider go under. He ran over and dove into the pool with the lifeguards.

“Andrew and I grabbed him and pulled him out of the pool together, and I started compressions and Anna came over with a mask and went and got an [defibrillator],” Beaudoin said.

It’s a moment the lifeguards say they will remember forever.

“In the moment everything happens so fast, so you just kind of go into autopilot but then afterwards we were like sitting there like 'that actually just happened,’” Anna Vosse said.

Schnider spent 15 days in the hospital. On November 6, the Boise Police Department presented Cpl. Beaudoin with the lifesaving award, an honor he shared with the lifeguards.

“What matters most is we saved, collectively saved a young kid's life,” Beaudoin said.

It's something Schnider is grateful for.

“They're heroes and I owe them my life and so much more,” he said.

Credit: KTVB
Boise Police Cpl. Tim Beaudoin and a group of lifeguards were honored for saving a drowning man at the Boise State athletic center.

In the middle of December 2018, Cpl. Dan Barber was working patrol when a man’s wife called 911 and said her husband left for a doctor’s appointment hours earlier and never returned.

“It was in the middle of December and there was quite a bit of snow and it was in the 20's, I remember it was a cold night,” Barber said.

It turns out, the man was stranded in the snow on Shaw Mountain Road, northeast of Boise. Dispatch had to ping his phone before they finally located him almost to the top of Rocky Canyon, right near Aldape Summit.

“So I went to Rocky Canyon and I could see on the map where he was at and sure enough it went from paved to dirt to snow and then I went until my car got stuck,” Barber said.

That's when Barber jumped out of his car and started jogging until he found the man.

“He was sitting in his truck and his truck was sideways and it was almost tipped over and he was up against the hill on the other side so he couldn't get out of his door,” Barber said.

RELATED: San Diego firefighters save Idaho man and his son from submerged truck in Tijuana River

“He said he was planning on being here all night, he was just sitting there smoking a cigarette and listening to classical music,” Barber said.

A happy ending to what could have potentially been much worse.

These are just three examples of heroism from officers who each would tell you they were just doing their jobs.

All of the officers in those stories want to stress that they didn't do it alone. It was all teamwork between themselves and the other agencies, as well as people who were there.