'He was just so fearless': Boise parents reflect on life of 10-year-old son killed in kayaking accident

"If you think you're hugging your kids too much or kissing them too much, it's really important to do it again." 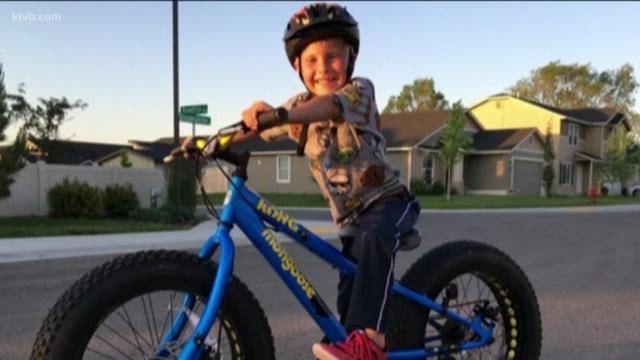 BOISE, Idaho — It's the news no parent ever wants to hear - that they have lost a child.

For two Boise parents, that news became a reality last week when they learned their 10-year-old son Maximus "Max" Hansen had been killed in a kayaking accident on the Payette River.

Max was spending the weekend in the mountains with his family. When his parents had to come back to Boise for work, Max asked to stay longer with his grandparents.

He went kayaking with them on the South Fork of the Payette near Lowman. During the excursion, the group hit a tree that had fallen across the river. Even with a helmet and life jacket on, the water was too strong and pulled Max under. Nobody could get to him in time and Max drowned.

When Hansen and Max's mom, Katie Tuttle, got to the hospital and learned Max was gone, they were in shock.

"Never even thought about losing one of our kids," Hansen said. "You just shut down. You just go through numbness, complete numbness, and you can't feel anything - and then absolute sadness and dread."

1 / 16
Katie Tuttle and Leif Hansen
Maximus "Max" Hansen, 10, was killed in a kayaking accident on the Payette River on Aug. 14.

Tuttle says the pain is unthinkable.

"Last time we saw him, he was happy. He was just Max," she added. "Then to see him like that, we couldn't wrap our heads around it. We didn't know what happened."

Max's parents say while it's an immense tragedy, they want others to focus on remembering Max as the great kid he was.

"We're going to miss him forever," Hansen said. "He was always so kind, everybody was attracted to him wherever he went. He'd make friends instantaneously. His smile, his kindness, he was just so sweet and he was just so fearless."

Max was charismatic and energetic. He loved dancing, sports and his electric motorcycle.

Max was a great big brother, his parents said, who shared a special bond with his siblings and could sometimes reach them in a way no one else could.

He also loved superheroes. In fact, Hansen remembers one Easter when Max was little. His older sister was all dressed up so Hansen wanted Max to do the same.

The family says it's hard to not have Max in their lives anymore, but it helps to know he was happy, loved and had a great life - even if it wasn't long enough.

Tuttle and Hansen said Max's loss is proof to enjoy every moment with loved ones.

"If you think you're hugging your kids too much or kissing them too much, it's really important to do it again," Hansen said.

Added Tuttle: "Just sneak up behind them and don't let them go."

Both parents tell KTVB they want to say thank you to the community for the big outpouring of support they've had since the accident. They said they're very grateful and it's helped ease a burden for them.

There is a Go Fund Me page set up to help with some medical costs and funeral expenses.

You can also leave messages or send flowers through the funeral home's website.