Our region has made a name for itself in recent years in the wine industry with perfect grape growing conditions, but vintners are discovering the extreme and unusual winter has taken a toll. 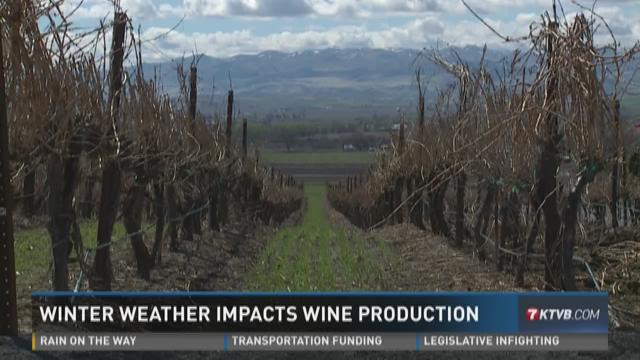 Our region has made a name for itself in recent years in the wine industry with perfect grape growing conditions, but vintners are discovering the extreme and unusual winter has taken a toll.

Vineyards across southern Idaho are seeing the most damage from the cold temperatures leaving some to wonder what this will do for production.

"Some of them may not have a harvest or very little harvest in 2017, and they might have to get fruit from Washington and Oregon, and that's just part of the agriculture industry,” Moya Dolsby, executive director of the Idaho Wine Commission, said. “Or they'll go to northern Idaho and get fruit from the Lewis-Clark Valley."

Williamson Vineyards in Caldwell is seeing some issues with their vines. The damage is on the layer of the vine that transports the water through the entire vine.

Mike Williamson, from Williamson Vineyards, says this damage is from the extreme cold. Now, he is looking at different ways to manage their vines.

"One strategy could be to leave extra buds on our canes. The buds are where the new shoots come out,” he said. "If there were some that were damaged that could leave some extra fruit to compensate for any losses."

Then there's more extreme routes that Williamson Vineyards has already taken. Like having to cut cabernet vines that were nearly 20 years old all the way down to the ground.

"It's a little bit tough. You know, this is the first vineyard we planted," Williamson said.

He said this isn't the end for those vines. He say's they'll regrow and that they'll have to retrain the vines. Williamson said if all goes as planned they'll have grapes again next year.

"We should, if everything goes the way we predict, we should have a full crop by next year," he said. "Definitely sad, yeah, but it's part of agriculture. You got to make a business decision."