Demand for a home to buy or a place to rent is dramatically outstripping inventory, pushing prices up. 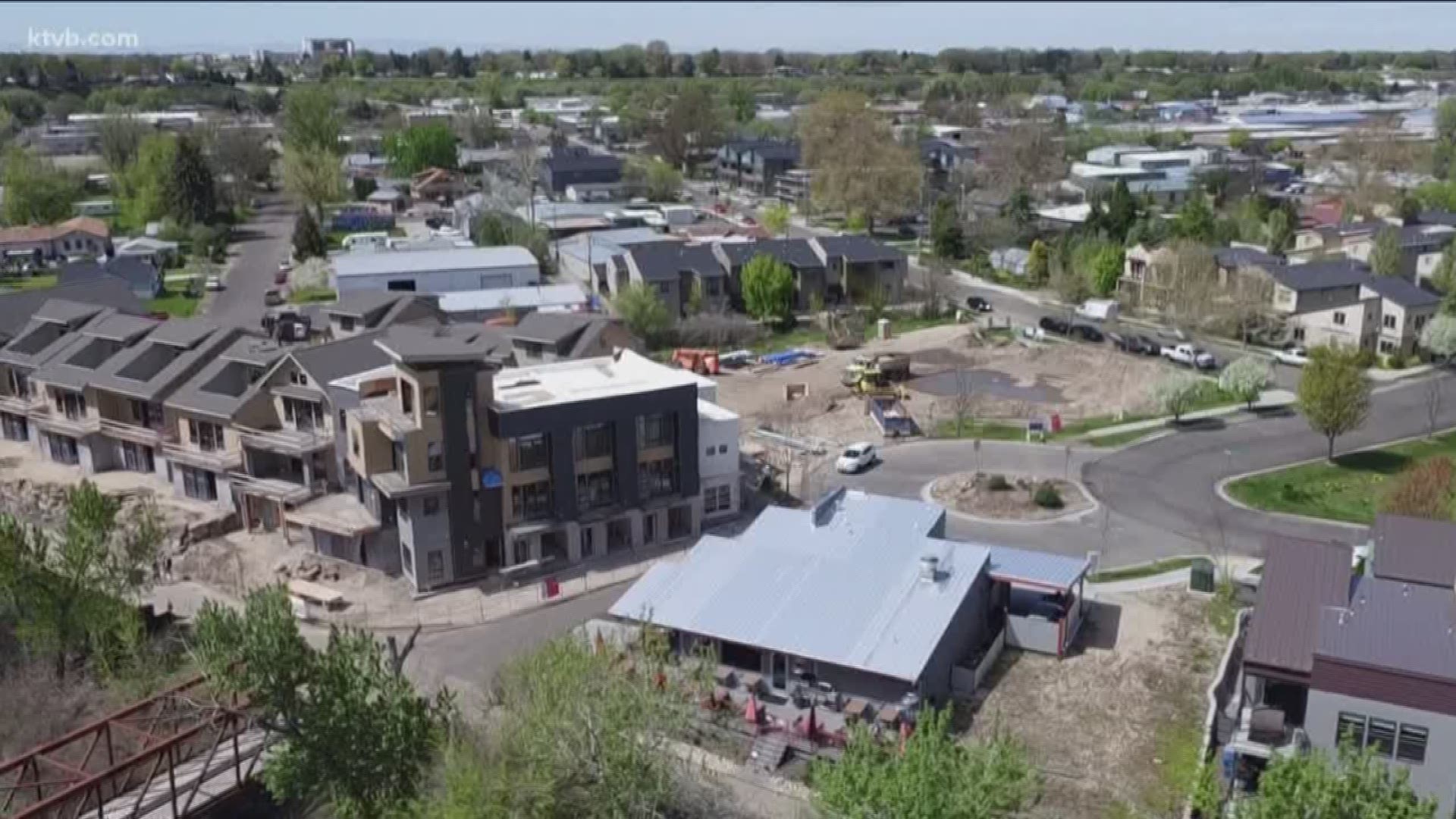 BOISE, Idaho — For all but the affluent, the housing situation in the Boise area is as desperate as it feels, according to a report released last week by Boise Regional Realtors.

And it's going to get worse before it gets better.

The Boise City Metropolitan Statistical Area  - which includes Ada, Canyon, Gem, Boise, and Owyhee counties - will need to add 4,000 new apartment units and 15,050 new single-family houses in order to keep up with expected population growth, according to the U.S. Department of Housing and Urban Development.

"Between 2012-2017, we needed approximately 10,000 more new units that were never built — and the deficit has only gotten worse," the Boise Regional Realtors report states.

Breanna Vanstrom, CEO of Boise Regional Realtors, said it is a clear-cut case of supply and demand.

Demand for a home to buy or a place to rent is outstripping inventory, pushing prices up. The median home sale price in Ada County jumped to a record-breaking $354,405 in June, a 10 percent rise from just one year prior.

"There are so many more people that are looking to purchase or rent then we have available supply," Vanstrom said. "It's just general population growth, it's again, not as many homes being listed so there is just more and more demand for fewer homes."

Multiple factors are driving the increased demand for homes to purchase throughout the area.

Millennials, the generation roughly between the ages of 23 and 38 as of 2019, are "aging into" homeownership, according to the realtors' group.

Another factor in the scant number of homes on the market is in-migration: Both in terms of senior citizens moving to Idaho to retire, and people fleeing higher-priced metro areas for Boise "due to our comparative affordability," according to the report.

For a person forking out $2,004 for their apartment in Orange County, California, for example, that $1,344 price point in Boise looks like a steal.

“Affordability is pricing [residents] out of the California home market, and many are searching for more affordable options in other areas,” said Danielle Hale, Chief Economist for REALTOR.com®, in a statement. “This exodus could help slow price appreciation in California… but it could also potentially heat up prices and reduce inventory in surrounding markets."

But don't just blame Californians, Vanstrom said. The top two places from which newcomers move to Ada County are Canyon County and Twin Falls County, according to a study of in-migration from 2012 to 2016.

"Everybody thinks it's maybe coming from one place," she said. "It really is the majority of people who are moving into Ada County are from Idaho, other counties nearby."

Other factors limiting existing housing supply - that is, homes that are not the result of new construction - include seniors choosing to "age in place" rather than selling and investors hanging on to single-family properties as rentals.

To add to the squeeze, homeowners can feel "locked in" to their current residence by the limited inventory and rising prices in comparison to local wages.

Even those whose equity and property values have jumped significantly with the ballooning housing market are hesitant to sell if they do not think they can find - or afford - another place to live.

MORE: Ada and Canyon County wages are too low to afford rental costs

According to the National Low Income Housing Coalition, the average renter in Idaho makes $12.88 an hour; that comes out to $26,790 yearly for someone working 40 hours a week. Ada County's median household income is $62,942, Boise Regional Realtors says.

According to the report, someone in Ada County needs to make a yearly salary of $42,064 to afford the average rent without spending more than the recommended 28% of their monthly gross income on housing. In order to buy a median-priced house with 20% down, (that's $70,881) that person should make $58,011 a year.

Someone who wanted to put down just 10 percent (more than $35,000) on that same median-priced Ada County home would need a salary of $65,262, the report concluded.

Without more places to live, that sky-high median home price is unlikely to shrink in the coming years, Vanstrom warned.

"In order to get our median sales price back into balance, we need more housing," she said. "And that's really housing, especially at the lower price points, but also in rental options."

MORE: Affordable shipping container homes in Boise offer a new beginning for those struggling with housing

Of course, even if city leaders greenlit all 19,050 residences recommended by HUD tomorrow, the homes would not be finished for some time - meaning the affordable housing crisis is likely to get worse before inventory starts to catch up to the need.

And for many in the Treasure Valley, concerns about unaffordable housing and resistance to growth go hand in hand. Discussions at City Hall about new apartment complexes or proposed housing developments often draw a crowd of objectors.

Vanstrom said her group is not advocating for sprinkling new construction willy-nilly throughout Ada County. Instead, she said, officials should focus on a smart-growth plan, whether that is increasing infill, adding new housing developments, or beefing up rental properties.

"We certainly need more units - whether they're purchased or rental, whatever those units may be," she said. "That's when we rely on elected officials and the cities to figure out what is right for those neighborhoods based on their research and community input to decide what is needed."