Are shipping containers the future of student housing in Idaho? College of Idaho takes first step

Typical dorm buildings can cost between $9 million and $14 million. These could cost about half that much.

Credit: College of Idaho
Artist's rendering of what the housing made from shipping containers will look like on the College of Idaho campus.
Author: Erin Bamer (Idaho Press)
Published: 10:50 AM MDT October 22, 2019

CALDWELL, Idaho — College of Idaho officials have known for years that they were in need of new options for student housing.

When an enrollment boost this fall brought an additional 57 students to on-campus housing, Jen Nelson, director of residence life, said the college had to double-up, or even triple-up, on some of the rooms to provide enough beds for all their students, according to report from the Idaho Press.

As a way to meet the growing need, C of I started a partnership with indieDwell, a Caldwell-based company that makes affordable housing units out of shipping containers, to make and install an additional dormitory building to house 54 students.

RELATED: College of Idaho to build dorms made from shipping containers

Nelson said the first structure, which includes 27 beds, will be ready by February. The second structure, also for 27 students, should be ready soon after, she said.

With the level that the college is seeing enrollment increase, Nelson said it’s possible C of I could be at full capacity again by the next school year. But she said the good thing about their partnership with indieDwell is that the projects can be scaled, and they can work with the company to add more housing in the future if this project is successful.

Back in the spring, Nelson and other C of I officials were brainstorming ways to create more housing on campus, knowing that the college was already maxed out and enrollment was likely to increase. She said a college trustee suggested indieDwell as an option, and they scheduled a tour of the company’s Caldwell facility.

Going into the tour, Nelson said she didn’t know anything about indieDwell or if their model was something that would work for C of I. But the more she learned about the company, the more it became an attractive option.

“Clearly, they put a lot of time and care in their work,” Nelson said.

IndieDwell also built units for the new Windy Court affordable housing community in Boise. And earlier this year, the company got a visit from Housing and Urban Development Secretary Ben Carson, who learned about indieDwell during their exhibit with other manufacturers on the National Mall in June. 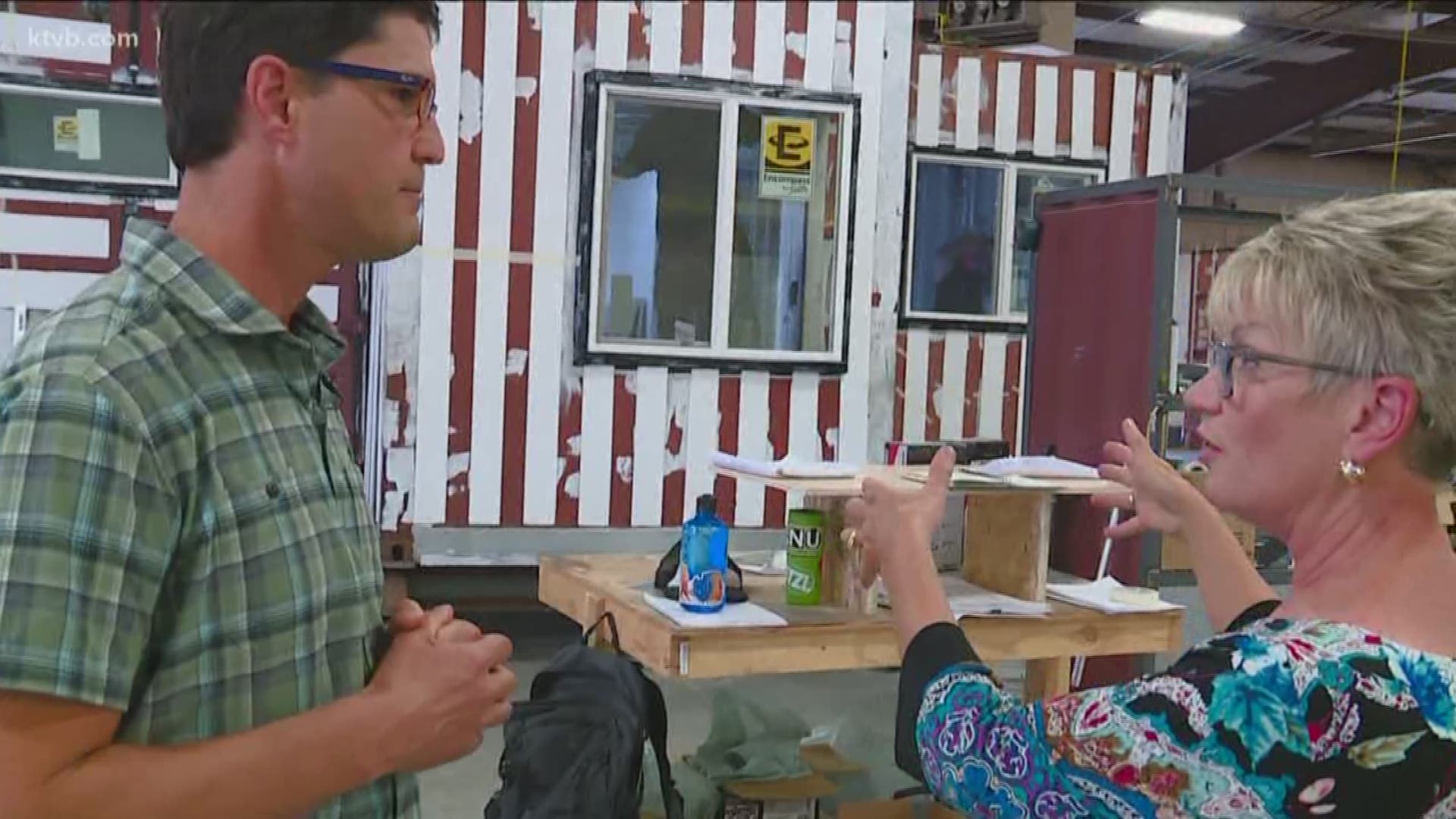 At a board meeting in May, Nelson said C of I officials decided to move forward with a partnership with indieDwell. Most of the months following were filled with design work, she said, as this is the first student-housing project indieDwell has taken on.

Pete Gombert, executive chairman for indieDwell, said the company’s process is essentially the same, even if the configuration of the units are different from single-family or multifamily units that they usually build.

Nelson likened the units to “LEGO pieces.” The timeline for the construction and installation of the structures is a lot quicker than building a traditional dorm, which Nelson said typically takes over a year. In comparison, indieDwell is expected to create and install the dorms within a few months.

IndieDwell’s facility, which opened in 2018, operates with a single assembly line that develops about five housing modules every week, Gombert said. Those modules can be connected to form housing structures of varying sizes. On average, he said indieDwell is able to deliver projects six to nine months faster than a typical contractor.

The cost of the project is also attractive to C of I, Nelson said. Typical dorm buildings can cost between $9 million and $14 million, she said, depending on the size. While college officials didn’t give a specific cost for the indieDwell project, spokesman Will Hoenike estimated it would be half the cost of traditional construction.

C of I senior Blake Cowman found these aspects of the project appealing when he learned more about indieDwell, although he admitted he was skeptical about the concept when he first heard of it.

“You hear ‘shipping container housing’ and you kind of pull back a little bit,” Cowman said.

Credit: College of Idaho
Blake Cowman, a senior at the College of Idaho, is involved in student government and said the partnership with indieDwell is "a slam dunk for the college."

But, like Nelson, as Cowman learned more, and even went on a tour of indieDwell himself, he started to gain favor toward the idea. He liked the fact that the project would be cheaper and faster than traditional options, and that the company has similar core values to the college, pays their employees a livable wage and makes energy-efficient units.

As a member of student government, Cowman said he gave feedback to the college’s board of trustees and supported the idea to partner with indieDwell.

Gombert said the company’s values often resonate with young people, and students connect with their goal of providing sustainable housing. He said indieDwell is committed to building their units in a healthy way, focusing on maintaining indoor air quality and building durable housing that reduces ongoing maintenance costs.

“That’s exciting for this new generation that cares about sustainability,” Gombert said.

The College of Idaho requires most of its students to live on campus for at least three years. Nelson said living on campus is an effective way to get students engaged and connected to the campus culture. Dorms range from 48 to about 200 beds, according to Nelson.

Being a small college, Nelson said even a 20-bed shortage has a big impact on the campus. Last school year, she said C of I had 945 students, 645 of whom lived on campus. That number went up to 1,074 total students this year, with 702 students living on campus.

Cowman has lived on campus for all four years of his education, and three of those years he has been involved in residence management. This year, he said there hasn’t been a single vacancy at the apartments, and as a resident assistant, he said any dorms that were vacated were filled almost immediately.

Nelson expects the new indieDwell dorms to fill up quickly.

“It will make for a lot of happy students,” she said.

Cowman said another reason he found the partnership with indieDwell appealing is that it could feature the college as an example for other institutions that are struggling with a high demand for student housing.

“This is a slam dunk for the college,” Cowman said.

While this may be the first student housing project indieDwell took on, it’s not the only one in the works. Gombert said he is in talks with 10 or so other colleges interested in this type of housing. Some of those colleges are in Idaho, he said, though he wouldn’t name specifics.

The College of Idaho is not the only institution in the state that is struggling to find space to house its students. Logan Fowler, director of communications and marketing for Lewis-Clark State College, said the college is “always has a high demand for student housing.” And Boise State University students have been spilling out into residential areas of Boise for several years.

In September, Boise City Council received, and ultimately denied, a moratorium request for high-density housing developments near Boise State, as neighbors said the housing did not fit in with the neighborhood. These developments mostly serve students, according to city officials. Back in 2017, Boise City Council did enact a temporary moratorium on the same type of housing for the same reason.

Enrollment at Boise State has increased every year for the past four years. This school year saw an additional 1,800 total students, according to a university enrollment report.

This trend is impacting Boise State students. Logan Potter, a junior at Boise State, lived on campus for her first two years of school, and intended to live on campus again this year. But when she submitted her application, she said the waitlist was so long that Boise State sent out an email to students advising them to search for housing elsewhere.

Potter found a studio apartment near campus that rents for $950 a month, which is pricey for her, she said. This has made budgeting difficult, and it’s a problem she said she shares with many other students.

The challenge isn’t based in a lack of housing at Boise State, but the growing number of students.

“It’s not like there’s not a lot of housing at BSU, because there is,” Potter said. But she sees a need for another full-sized dorm to meet demand.

In January, the university posted to its Housing and Residence Life website that the number of returning students wanting to live on campus had increased by 200%, putting a strain on housing inventory. The waitlist for sophomores was over 300 students.

“We cannot currently meet the demands of our incoming students and those wishing to return,” the Jan. 30 post reads.

Nelson said one reason why the partnership with indieDwell was “a perfect option” for C of I is because it’s a small college, with just over 1,000 students compared to Boise State’s 22,000.

Gombert said indieDwell could manage to build larger structures, but probably not at its Caldwell facility, which only operates one assembly line. He said they are considering places for new manufacturing facilities that could work multiple assembly lines at once, which could increase their production to 20 modules a week instead of just five.

Potter said Boise State officials need to evaluate housing options and project growth estimates into the future to figure out what the university’s needs are moving forward. While Potter feels like she is in a safe position with her parents just an hour away from campus, she said on-campus housing is a necessity for other students who come from outside Idaho.

The Idaho Press was unable to reach Boise State officials on deadline.