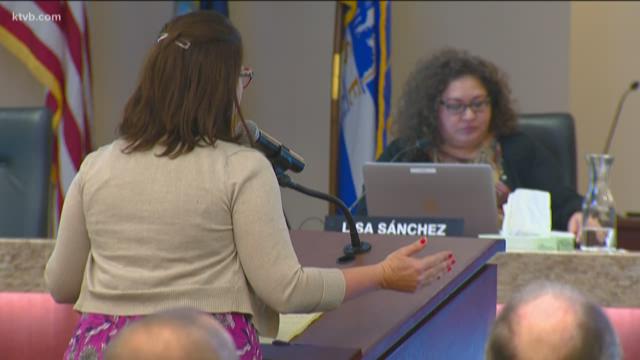 Dozens of renters, landlords and others lined up to weigh in on a proposal that would cap rental application fees at $30.

The ordinance is being brought forth by Boise City Council member Lisa Sánchez, who has said previously that she wants to keep property management companies from taking advantage of renters in Boise's hot housing market.

It's a rule that Kathy Corless, who owns and manages several rental properties in Boise agrees with.

"There are costs that any person who has a business has to do and when we look at application fees, I think it is a cost that some landlords are trying to push down upon the applicant that really should be their cost of doing business," Corless said.

Rental application fees can range anywhere from $25 up to $200, according to the Intermountain Fair Housing Council, a nonprofit that works to ensure equality in housing practices.

As KTVB reported late last year, many renters feel the cost just to be considered for a unit is too high. But local property management companies say they make no profit off of the fees, which are supposed to cover credit and background checks.

"In reality, I lose about $15 on each application already and our fee is $39.95," said Cassandra Swanson with Paramount Property Management, one of several local companies opposed to the measure.

Swanson says in addition to conducting background and credit checks, her company also investigates an applicant's medical debt and employment history. Swanson believes a cap would keep her company from doing its due diligence.

"I'm all for making sure the abusers are not abusing but I want to make sure we are not chasing away owners," Swanson said.

In addition to capping fees at $30, if approved, the proposal would prevent property managers from charging an additional rental application fee if the tenement is moving to another unit under the control of the same property management company.

"If I can provide some of it and I only have to do a partial check, it makes sense that it would be less," Swanson said. "We have had situations where someone moves into a unit and then may end up with a felony or something that makes them a predator, or a child predator and we want to protect the community before we move them to another unit."

Property managers would also be required to disclose all criteria applicants will be judged on.

Under the proposal, any property managers who violate the rules would be fined $100.

City Council members ultimately decided to consider suggested modifications and opted not to vote on the proposal Tuesday night.