The organization is struggling to gather enough food to serve all the residents seeking help. 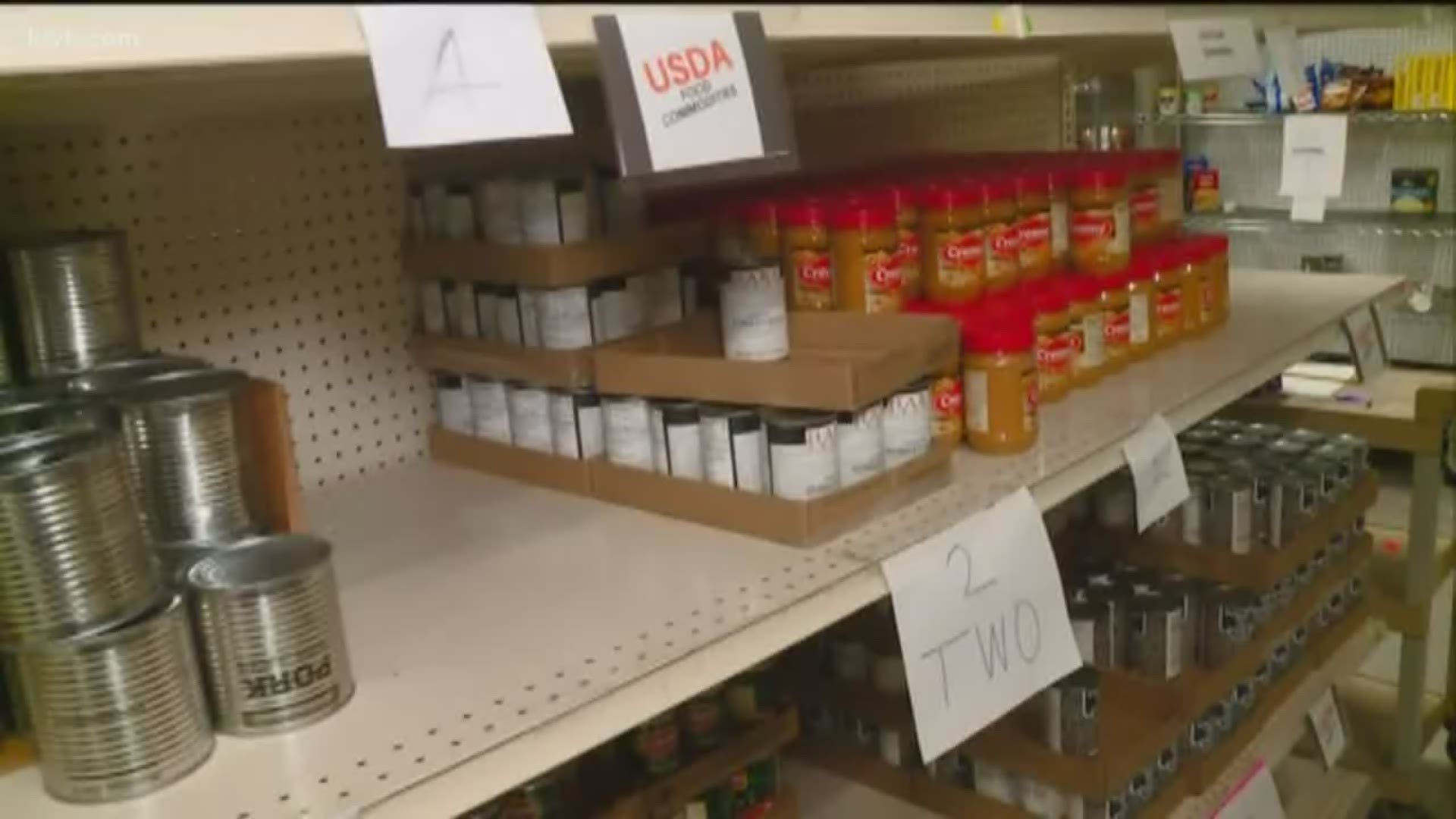 NAMPA, Idaho — During the holidays, the Salvation Army usually gets enough food donated to its Treasure Valley food pantries to last until May, when its next major food drive is scheduled.

But due to fewer donations and a rise in demand for food, the organization is struggling to gather enough food to serve all the residents seeking help, according to the Idaho Press.

On Feb. 12, the Nampa pantry had one can of soup left on its shelves, public relations director Margie Potter said. The following day, that can was gone, and several other shelves designated for canned meat, beans and peanut butter were also empty. The most common items available were a variety of canned vegetables and perishable items like baked goods.

The Salvation Army has three food pantries across the Treasure Valley in Boise, Nampa and Caldwell. Potter said the Nampa Corps gathers food from more than a dozen food drives over the holidays, from October until the end of December. This year, she said the drives gathered only 30-40% what they normally do.

Credit: Idaho Press
Shiree Christensen, an intern with the Salvation Army, fills boxes with items from a steadily dwindling supply at the food pantry in Nampa, Tuesday, February 18, 2020.

During the nonprofit’s biggest food drives during the holidays, Potter said the Salvation Army usually gets between 400 and 600 milk crates full of food donations. This year, its largest food drives produced about 150 to 200 crates, she said.

Typically following the holiday season, the Salvation Army’s Nampa food pantry is filled with so many boxes of food that it’s hard to see the floor, social services coordinator Yvonne Stringam said. The boxes often spill out into the hallway.

Now, the Nampa Corps’ hallways are clear of any boxes — a site that concerns Stringam.

RELATED: Strangers line fence between two Boise homeless shelters with scarves for those that need it 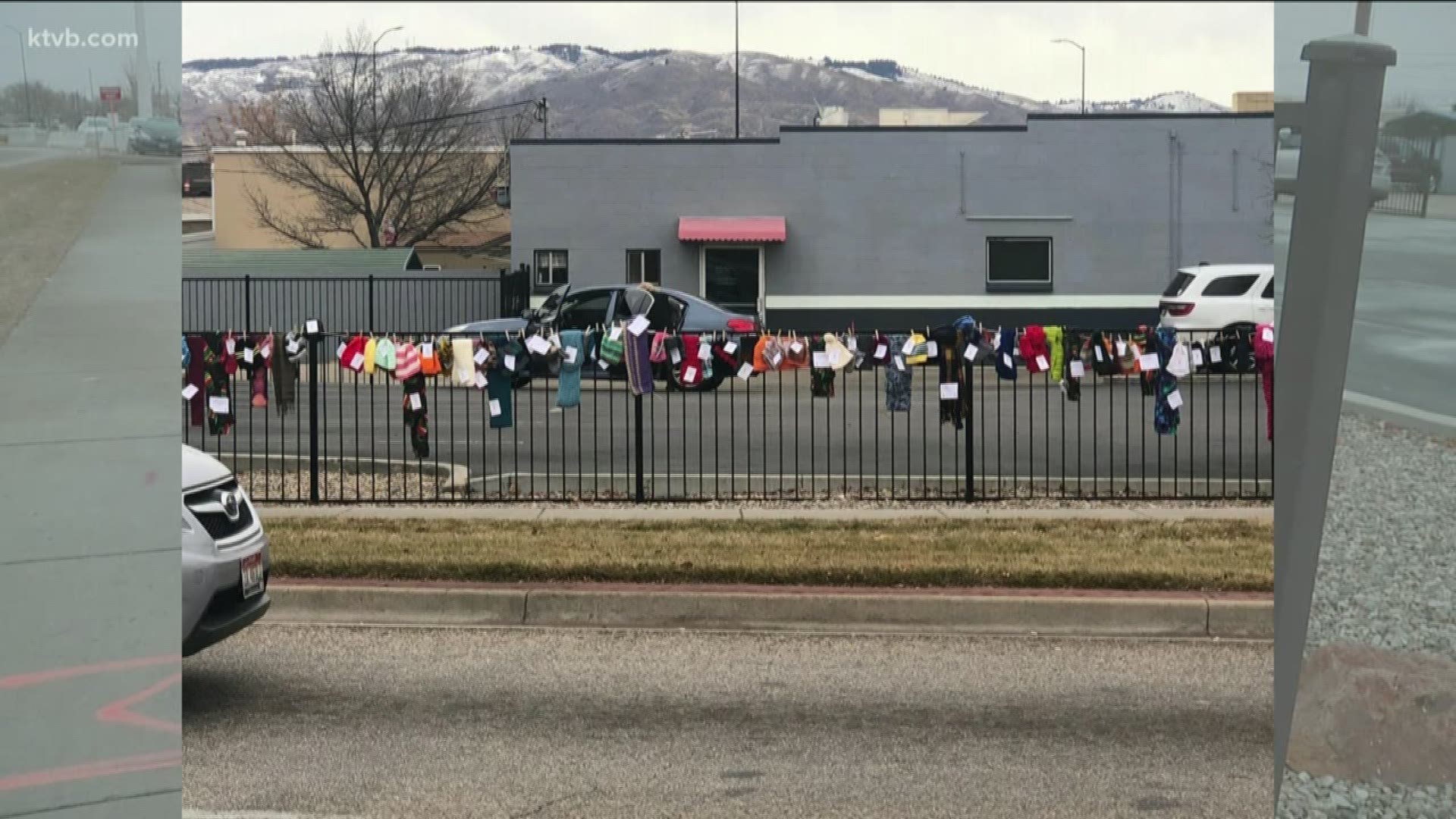 Potter said the Caldwell Corps’ food pantry is also experiencing a lack of food, partially because the Nampa and Caldwell pantries split whatever food is gathered at many of the holiday food drives. The Boise pantry also saw fewer donations, Potter said, but it’s not struggling as much because it receives more donations by being in a more populated area.

Salvation Army Caldwell Corps Capt. Robyn Bridgeo said the Caldwell food pantry also has several empty shelves. The pantry still has some food available, but he said the corps is always running out of canned food and dry goods.

The Salvation Army works with the Idaho Foodbank to stock its pantries, but Stringam said the Nampa Corps works under a tight budget, and she only orders food from the Foodbank that is free. That includes surplus items like apples, bananas, potatoes and rice. Other items the pantry is in need of, like peanut butter and canned meat, come at a price.

The fewer donations resulted in less canned food stocking the shelves of the pantry, Potter said. Canned foods are of high value to the families who seek out the pantry, she said, as they don’t expire as quickly. Lately, Stringam said pantry staff has been stocking food boxes with more perishable items, such as bread and produce, which go bad more quickly, but are some of the only food they have to give away.

Combined with less food stocking the shelves, Salvation Army officials said there are more people seeking the pantry than usual. Stringam, who runs the pantry’s front desk, said the pantry serves about 45 people per day now, compared to about 30 people a day in 2019.

The Caldwell pantry has also seen a rise in demand. Bridgeo said the pantry has served an additional 2,000 people each year for the past three years. He attributed this to population growth combined with a lack of high-paying jobs. Many of the Caldwell pantry’s clients are the working poor, and are not able to meet ends meet even by juggling multiple jobs.

Job losses, medical costs and parents needing food for their children are among the most common reasons people come to the Nampa food pantry, Potter said. Scruggs said rising rents across the Treasure Valley have also contributed to the rising demand.

RELATED: 'Something needs to be done': Homeless facing long wait for affordable housing in Ada County

With more people seeking out the pantry and less food to give away, Stringam said the content of the food boxes is suffering. She said the staff isn’t able to fill the boxes with as much food. It may appear that the boxes are as full as normal, she said, but that’s only because staff are filling the boxes with larger perishable items.

During the Christmas season, the Salvation Army food pantries give out holiday food boxes. Stringam said the Nampa pantry normally tries to give doubles of boxes to families with five or more people, but because of the low supply and high demand, they couldn’t do that this year.

Stringam said the situation has become so bad that she has had to close the Nampa pantry a few times when there wasn’t enough food. A few times, she has asked clients if they can wait a few days for a new delivery of food from the Idaho Foodbank.

If the problem continues, Scruggs said the Nampa Corps will likely have to increase the qualifications needed to receive food boxes. He said the food pantry is going to stay open no matter what.

Scruggs said the Salvation Army is working on a new way of organizing the food pantry to make it easier for clients to get food that is more specific to their needs. The system would allow clients to choose a set number of items from the pantry themselves, with volunteer supervision. That way, he said the Salvation Army can avoid giving away food that residents and their families will not be able to eat.

The Salvation Army Caldwell food pantry is open from 1 p.m. to 3:30 p.m. Tuesday through Thursday at 1015 E. Chicago St. Bridgeo said people can organize a donation to the pantry by visiting during their office hours or calling 208-459-2011 to schedule a time.

The Salvation Army Caldwell food pantry is open from 1 p.m. to 3:30 p.m. Tuesday through Thursday at 1015 E. Chicago St.

People can organize a donation to the pantry by visiting during their office hours or calling 208-459-2011 to schedule a time.