Idaho lawmakers looking for ways to provide property tax relief: 'Citizens are being priced out of their homes'

A group of lawmakers is meeting before the 2020 legislative session to come up with possible solutions for high property taxes. 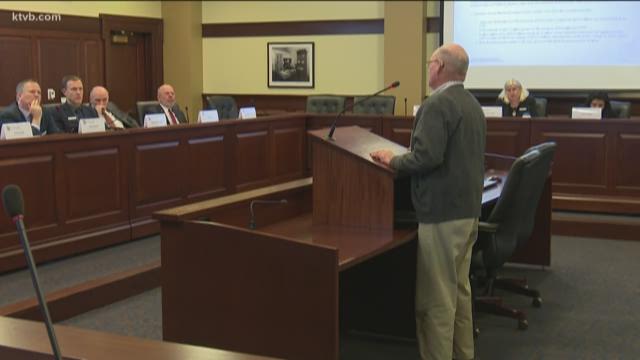 Rising property taxes throughout Idaho have homeowners asking for relief. Lawmakers say they are listening, and now a working group of state legislators is trying to come up with a solution to the problem.

"A lot of our citizens and constituents are being priced out of their homes," Rep. Gary Collins (R-Nampa) said. He is the co-chairman for the working group, which is meeting prior to the start of the 2020 legislative session.

Lawmakers want to keep senior citizens and people on fixed incomes in their homes. The group heard on Monday from experts, and from senior citizens who are struggling to stay in the homes they've lived in for decades.

One person who spoke before the committee was Patrick Chapman. He moved to Ada County in the 1990s and has lived in the same home in Eagle since.

Chapman's home has increased significantly in value over the last two decades, meaning his property taxes have also increased.

Chapman is not alone; Idahoans throughout the state are struggling with the jump in property taxes in recent years.

During the hearing, several county officials from both urban and rural areas testified about how they use property taxes and urged lawmaker to exercise caution, because if they cut back on the funding source, services will suffer.

“There are a couple areas we have been grappling with. These areas are our courts and our jail,” Twin Falls County Commissioner Dan Hall said. “Our jail facilities are part of our concern here.”

Officials from at least half a dozen counties, including Ada, testified. They spoke about the challenges they face when it comes to funding county government.

“I've grown somewhat cynical that anytime I open the paper and see there is a homicide, I hope its not Bannock County,” Bannock County Commissioner Terrel Tovey said. “Because it’s about $1.5 million, and my county doesn't have it. I have pending litigation and lawsuits that if they're successful, they will bankrupt my county.”

“We learned that property taxes are about 46% of their budgets, and if you're telling me that 46% portion of that county budget can't be necked back to keep our elderly and young families in their home, I'm telling you they are wrong,” he said.

The representative from Star noted that the state supplies counties with several funding sources - like sales tax, alcohol tax, and income tax dollars.

“I think it’s time that we can pull back that 46% of that budget, that property tax portion and keep our elderly and young families in their homes,” he said.

“I think if you took the new construction component out, it would help rural counties that aren't growing so it’s not going to hurt them, they will take the 3%,” he said. “Ada County, a big county can still take the 3% but that growth component wouldn't shift to everyone else.”

RELATED: 'Our hands are tied:' Services expected to be cut after roads levy fails in Valley County

He talked about some possible legislation that could be introduced in the 2020 session to try and provide some relief to property owners.

“A bill to double the amount of circuit breaker property tax relief, a bill to provide income tax credits for both residential homeowners and renters that will be paid for by the state at the state level,” he said. “They would be up to $500 in order to help local property tax payers to better afford the property taxes they're paying.”

All the work being done by the group of lawmakers is to give people like Chapman some relief on their property tax bills.

“I don't like to complain to people who can't do anything about it,” Chapman said to the group. “I wanted to come and talk to you folks because maybe you can do something about it.”

The working group plans to meet at least one more time to talk about more ideas before the session starts in January. A date for the next meeting wasn’t scheduled on Monday.

The group is made up of 10 lawmakers, eight Republicans and two Democrats from both the House and Senate.