The deal between the trucking company and the city would see the two swap pieces of property around Boise and avoid a trucking terminal being built near a small neighborhood. 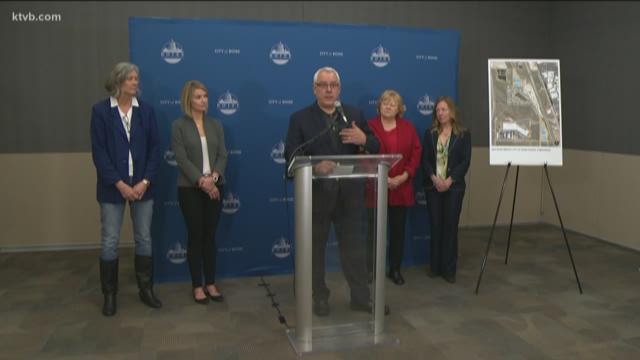 BOISE, Idaho — After residents of a mobile home park in southeast Boise raised concerned to the Boise City Council, a land-swapping deal between the City and R & L Carriers has now solved the issue and made all parties involved happy.

The hotly-contested issue was brought up when R & L proposed to build a massive, new trucking terminal near the Blue Valley neighborhood.

Residents of the community didn't want it there because of concerns of pollution, safety, and their property values decreasing. R & L and the developer claimed they were within their legal rights to place it there, thanks to zoning laws.

Now, Mayor Dave Bieter and members of the City Council say they will swap land with the developers, saying it is a move that will make all three sides happy.

The brokered solution won't become official until Tuesday night and the approval of the deal still rests in the hands of council.

Bieter says the two properties are a similar size and the one the city is offering is further south from the neighborhood and that's why they're on board with the plan.

"We were hopeful in the negotiations that our property located close by would be a suitable trade," he said. "They are very comparable properties."

For months, residents fought the idea of a trucking facility being built next door and brought their concerns up during City Council and Planning and Zoning Commission meetings, but thanks to this new deal, those issues are gone.

"I am pleased and I'll tell you the most awarding thing was seeing the smiling faces on the people in attendance today because they had no idea what was happening today," Bonnie Hardey, the president of the Blue Valley Tenant Association, said.

The land-swap solution has been in the works for the last six to eight months. Bieter said they signed a non-disclosure agreement with the developer, so the plan couldn't be made public before today.

Making the deal was also a responsibility that the city needed to take care of, according to Bieter.

"If you have an opportunity to make right what wasn't, we in government ought to take that opportunity," he said.

Bieter went on to say that they land the city receives in the deal will most likely be sold to another private entity, but immediate plans for the property are not clear quite yet.

Hardey says she already has a vision for the property.

"We have a lot of elderly who they can't go very far but to have a park that close would enhance their lifestyles," she said. "Get them out and have a walking path, and have a dog park for their dogs."

Before all of this can happen, the City Council has to give it the green light to move forward. The solution is on their agenda for Tuesday night during their next meeting.