Boise residents can recycle things like grocery bags and Saran wrap, but officials say many don't do it the right way. 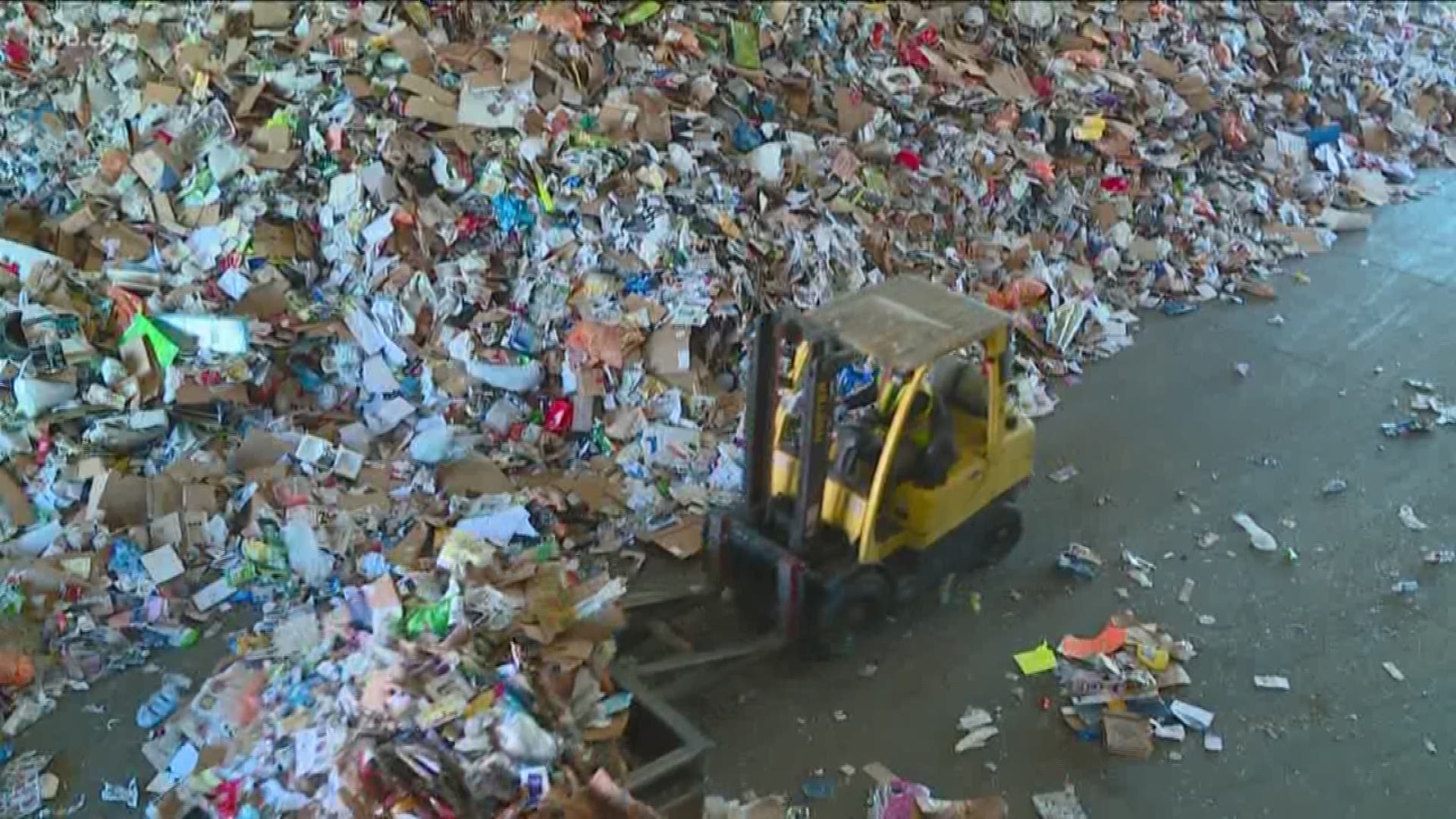 BOISE, Idaho — Boise's recycling program is one of the most sophisticated in the country, going through dozens of steps and sorting before any garbage gets a second life.

For most people, what happens to Boise's recycling is out of sight, out of mind. But in reality, if residents put a little more thought into tossing their used items into the proper bin, it would save crews at Western Recycling's materials recovery facility in Boise an immeasurable amount of time.

And there's an even larger payoff — some of what's tossed away in Boise is now turned into fuel at an out-of-state facility. But only if it's properly disposed of.

MORE: Treasure Valley Recycling Guide: How to sort plastics and use those orange Hefty bags

Last year, China decided to stop accepting much of the U.S.'s plastics, which were previously shipped overseas for recycling. Communities and cities across the country were left to decide what to do with their recycling — dump it in a landfill or find another way to reuse it.

Boise decided to turn the city's recycling into fuel, which involves workers spending hours to sort through thousands of pounds of trash, much of which is heavily contaminated. It's a dirty job, but it does help make Boise cleaner and more sustainable.

"At the end of the day, there is a lot of hands involved, it is very labor intensive," said Rick Gillihan, the general manager of Western Recycling.

Credit: Troy Colson/KTVB
Tons of recycling are dumped out on the floors of the Western Recycling facility before workers have to manually sort it out.

Every day, 150 tons of recyclable trash is picked up in Boise and dumped onto the floor of this recycling facility to be sorted by hand. Everything that is loosely allowed into blue recycling bins is hand-picked by over two dozen workers that have sort through dozens of trash per minute - a job not for the faint of heart.

"Yeah, it's dirty, its hard work, it is challenging to find 25 people that want to do it," Gillihan said. "A lot of people can't do it because they get motion sickness when you're staring at that conveyor and its running in front of you."

However, only plastics marked with a number one or two, aluminum cans and foil, paper products like cardboard, newspapers and office paper is supposed to be put into the blue bins.

"So those are your heavy duty jars, and jugs, maybe you can think of a heavy-duty juice container," Colin Hickman, with Public Works Boise, said on what plastics the Western Recycling's facility takes.

Hickman says the majority of the workers' time is spent on sorting things that should not be sent to the recycling facility in the first place. The biggest contaminants by far? Plastic film. The "plastic film" includes grocery bags, garbage bags, saran wrap, and bubble wrap.

Credit: Troy Colson/KTVB
Everything that is put into blue bins has to be sorted by a crew of 25 people every day. They separate what is recyclable and what isn't.

"My blood pressure goes through the roof every time I come up here," he said. "It's everywhere in this stuff. It's not supposed to be in the recycling containers to begin with and we spend a tremendous amount of labor trying to remove it and it's going to go to the landfill anyway."

Roughly 400 tons of contamination, mostly plastic film, is painstakingly picked out by hand and sent to the landfill every month. If it was disposed of properly, all of that plastic film could have been converted into fuel.

Gillihan says if you aren't sure about if something should be recycled, just throw it in the trash.

"That will help make our jobs tremendously more easy," he said. "And it makes the marketing of our finished product better because we do have a cleaner product."

As far as recycling glass goes, Boiseans can drop glass of at one of 12 sites or leave it at the curb after paying a monthly fee.

More plastics get a second life with the Hefty bags

While plastic film isn't recycled at the Western Recycling's materials recovery facility there is a way for many Treasure Valley residents to have it recycled.

Learn exactly how to use the hefty bag and how to sort your recycling in our comprehensive recycling guide.

For Gillihan and his crew, sorting the orange bags is a simple step in their process. But the journey to becoming fuel for these recyclable items is just beginning after they sort it out.

Credit: Troy Colson/KTVB
Workers that sift through recycling set aside every Hefty EnergyBag that they see so it can be taken to Salt Lake City and turned in diesel fuel.

"It's then taken down to Salt Lake City and converted into diesel fuel," Hickman said. "So it's really giving another life to those plastics that would have otherwise been landfilled."

Boise is one of three cities in the country to participate in the Plastic to Fuel program city-wide. Since the city started the program one year ago, the program has been well received by the community, Hickman says.

The city is mailing out more vouchers that are good for a free roll of orange bags in mid-June.

Boise may be ahead of the recycling game compared to other cities in the country, but Hickman says the community still needs to address one burning question. How do we use less and reuse more as there is always a constant stream of more trash?