The owner of The Yardarm says a new housing development has raised several red flags for him. 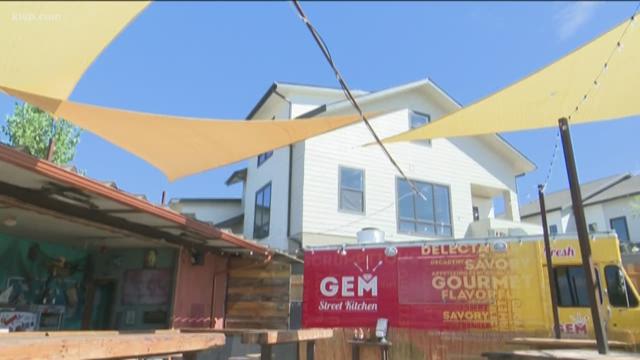 GARDEN CITY, Idaho — A popular bar right off the Greenbelt is calling foul after they say a neighboring development was built wrong.

Among other issues, they say part of the new housing complex extended onto their property.

Customers have noticed too, the new housing development is very close to The Yardarm Bar, off 35th Street in Garden City.

The general contractor admits there was an issue with the roof going too far over the property line, but other than that, they say the project is done and good to go.

"Ultimately that building behind us is in the wrong place," said Victor Meyers, owner and operator of The Yardarm and neighboring Corridor Surf Shop.

Meyers thought something about the new housing development next to his bar looked off.

"The moment that they started building the roof, as soon as the roof was framed and sheeted, I felt like it was over my property line, I can visually tell that," said Meyers.

And he was correct, a part of the new development next to The Yardarm was hanging over the property line.

Meyers says for more than a year now he has pointed out possible issues with the development.

In May of 2018, he sent an email to Garden City officials saying the construction didn't match what was approved by city council, and that there were numerous red flags.

Because a part of the neighboring roof was hanging over the property line, Meyers filed a trespassing lawsuit.

That suit has since been dismissed, but in the midst of it, the general contractor, VERTICAL Corporation, cut back the edge of the roof, the eave, so they were on their side of the property.

However, Meyers says there is still a problem with the drainage and design of the building next door.

So now he is taking to Instagram to try and rally community support for a Garden City City Council meeting next week.

"The drainage plan is for not where that building is," said Meyers. "Any water I have to deal with is a concern. We don't want to let their runoff water dictate how we run our business."

KTVB spoke with Todd Weltner, President of VERTICAL Corporation, for an off-camera interview.

Weltner acknowledged that there was an issue with the roof overhanging the property line, but that it has now been taken care of.

As for the drainage concerns, Weltner says during construction there might have been a water issue because all systems weren't in place. Now they are he says, and going forward he says there shouldn't be an issue

Meyers says he doesn't believe that is true, and knows what he wants them to do.

"I want them to re-engineer and re-design their drainage plan so I don't have problems with it the rest of my life. And I'd tell them to be good neighbors, which they have not done, ever," said Meyers.

There will be a Garden City Council meeting coming up on Monday, September 9.

Specifically, the meeting is to talk about another topic about this development, but both the general contractor and the owner say they are expecting this to come up too.

People are expected to move into the new housing complex starting this week.