Options include an overpass or underpass where State Street meets Eagle Road. 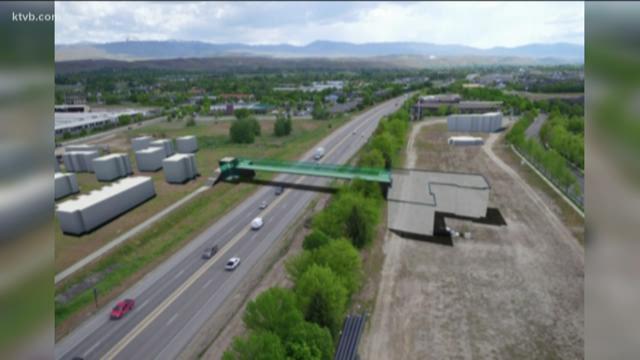 EAGLE, Idaho — Traffic is often heavy at the intersection of Eagle Road and State Street, and being along a major highway doesn't make it any easier for Eagle residents to cross.

That is why the City of Eagle has been exploring alternative means for pedestrians and cyclists to cross State Street, also known as State Highway 44.

"For people to go back and forth is really important," Eagle Mayor Stan Ridgeway said. "To have a safe crossing rather than waiting at an intersection."

Logy and Gerhard Mohr say an pedestrian crossing would be great for them as cyclists. The couple lives in North Eagle, and often cross Highway 44 to visit the park in South Eagle.

"You've got all this traffic that's coming down here on State Street making it quite unsafe," Gerhard Mohr said. "Especially if you've got children with you."

"The speed limit is quite high," Logy Mohr added.

The speed limit on Highway 44 is 55 miles per hour, which Mayor Ridgeway admits is pretty high.

"We had a man die there earlier this year," he said. "So it's really not a safe place on a busy highway for that crossing."

That's why Eagle hired The Land Group to complete a study, just to see what the options would be after residents expressed interest.

"We've had people come to town hall and City Council meetings wanting a safe passage," Ridgeway said. "One of the reasons for the study is to get it out there so our citizens can weigh in on that, because we have a limited budget and a lot of priorities."

Ridgeway said that an underpass would cost $13 million while a bridge would cost $7.6 million. The project just completed the study phase. No decisions have been made yet.