The development would tear down housing on Boise Ave. for new student housing. "They're turning the City of Trees into the City of Concrete," a resident said. 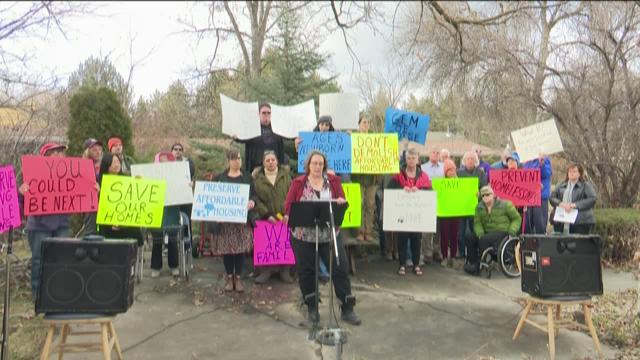 BOISE, Idaho — More than three dozen residents of an apartment complex on West Boise Avenue protested on Friday afternoon over a proposed development that they fear could make them homeless.

During the protest, the residents of Ridenbaugh Apartments wanted to make clear to developers that they wouldn't just be tearing down a building, they would be tearing down livelihoods for the people that call the building home.

Residents gathered in their own backyard to protest a proposed more than 500-unit student housing development with signs saying, 'DON'T DEMOLISH AFFORDABLE HOUSING' and 'DON'T PUSH US OUT.'

The development would push people like 93-year-olds, veterans with disabilities, and families with newborns out of affordable housing, said Monica Fabbi with the Intermountain Fair Housing Council.

"There's one [resident] that's been here 22 years," said Renae Jordan, one of the residents. "He's a bicyclist, he does not own a car. He transfers to and from his job on his bicycle – he has no family, he has no options and we will end up homeless."

Residents of the complex said the development would evict them, leaving many, especially those on a fixed income, with no place to go. Especially with Boise's income only increasing by 14% since 2014, while the cost of housing has increased by 75% in that time, according to Diana Murphy, another resident.

Murphy also spoke about how the residents have had talks with the city, which estimates affordable housing based on an average income of $56,000 per year.

Ridenbaugh residents say it's not just their homes that they'll be losing, but they would also be losing a family.

"In just the short time I've been here in seven years, we've developed friendships that will be lifelong," Jordan said. "We provide for each other."

If the development does move forward, residents all have the same fear.

"There are no options. That's the bottom line," Murphy said.

'Something needs to be done': Homeless facing long wait for affordable housing in Ada County

'It's a land grab': Residents concerned over possible future changes to Meridian subdivision