More than 11,700 people responded to a survey on preferences for a possible high-capacity transit system from Caldwell to Boise. 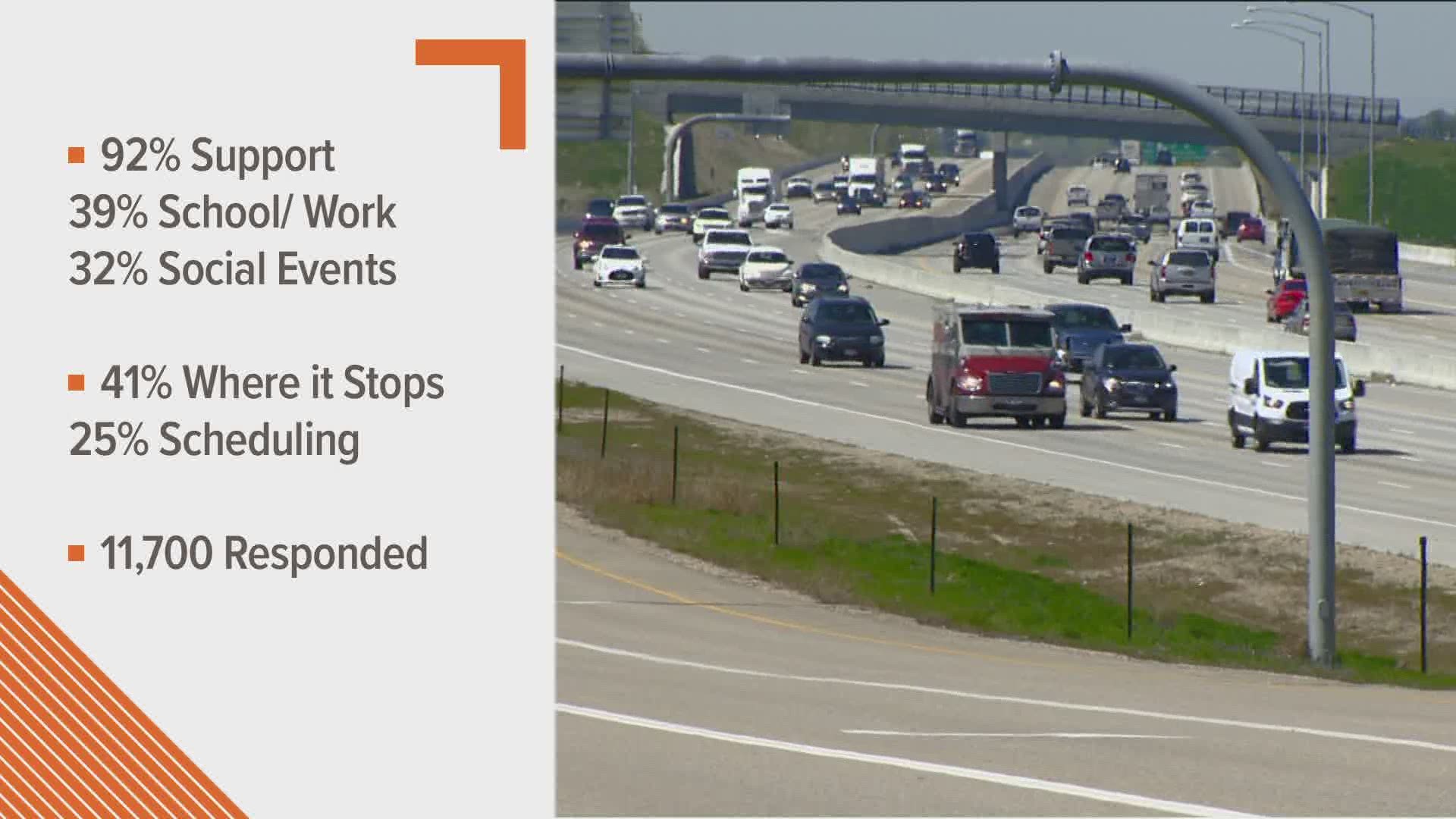 BOISE, Idaho — While a mass-transit system in the Treasure Valley is likely still decades away at best, thousands of people voiced their support for using one in a recent survey conducted by the Community Planning Association of Southwest Idaho, or COMPASS.

More than 11,700 people responded to a survey on preferences for a possible high-capacity transit system from Caldwell to Boise, according to COMPASS.

The survey found that 92% of respondents would support or use mass transit at least occasionally if it met their needs. Only 6% said they wouldn't support it or use it and 2% said they needed more information before coming to a conclusion.

People said the transit system's stops and schedules were the most important factors when deciding whether or not to use it, 41% and 25%, respectfully.

"The process to plan and build a high-capacity transit system takes decades," COMPASS Associate Planner Rachel Haukkala said in a statement. "While the survey results were predominantly in favor of high-capacity transit, it will still be many years before final decisions are made or a system is in place. Any future plans would include significant additional public input and would need public support for funding."

This was the third survey conducted by COMPASS to gauge people's opinions on a possible mass transit system in the Treasure Valley. This survey was conducted between Jan. 19 and Feb. 27 and 11,706 people participated in it.

The survey included scale voting on the tradeoff on investment; build the least expensive option to a more expensive investment may better in the long-term. This question has 10,832 people respond and 6,138 said voted for "More expensive might be better investment."

Credit: COMPASS
In a recent survey by COMPASS, people responded on a scale of which tradeoffs for a mass transit system in the Treasure Valley that they would want.

COMPASS also had people indicate on a map where they would typically go for job, home, entertainment, errands and other destinations before the COVID-19 pandemic.

Credit: COMPASS
In a survey by COMPASS, people were able to indicate on a map where they would go for certain things, like errands. Red and purple in the map above indicate more people marked that spot in the survey than those in blue and yellow.

The survey also asked people how frequently they would use or support a mass transit system that met their needs. Out of 9,787 participants, 5,819 said they'd use it regularly, 2,735 would use it occasionally, 422 would support it but never use it, 621 would not support or use it and 170 said they needed more information before answering.

Credit: COMPASS
A survey conducted by COMPASS also asked before about the tradeoffs of a possible mass transit system, more service during rush hour but fewer during the day or services evenly spread out.

RELATED: Here's what the Treasure Valley can learn about light rails from Portland and Salt Lake City