“I understand they have to be aggressive about their brand, but this is overreach,” Leigh Gill, the Shorts’ lawyer, added. “No one is going to be confused.” 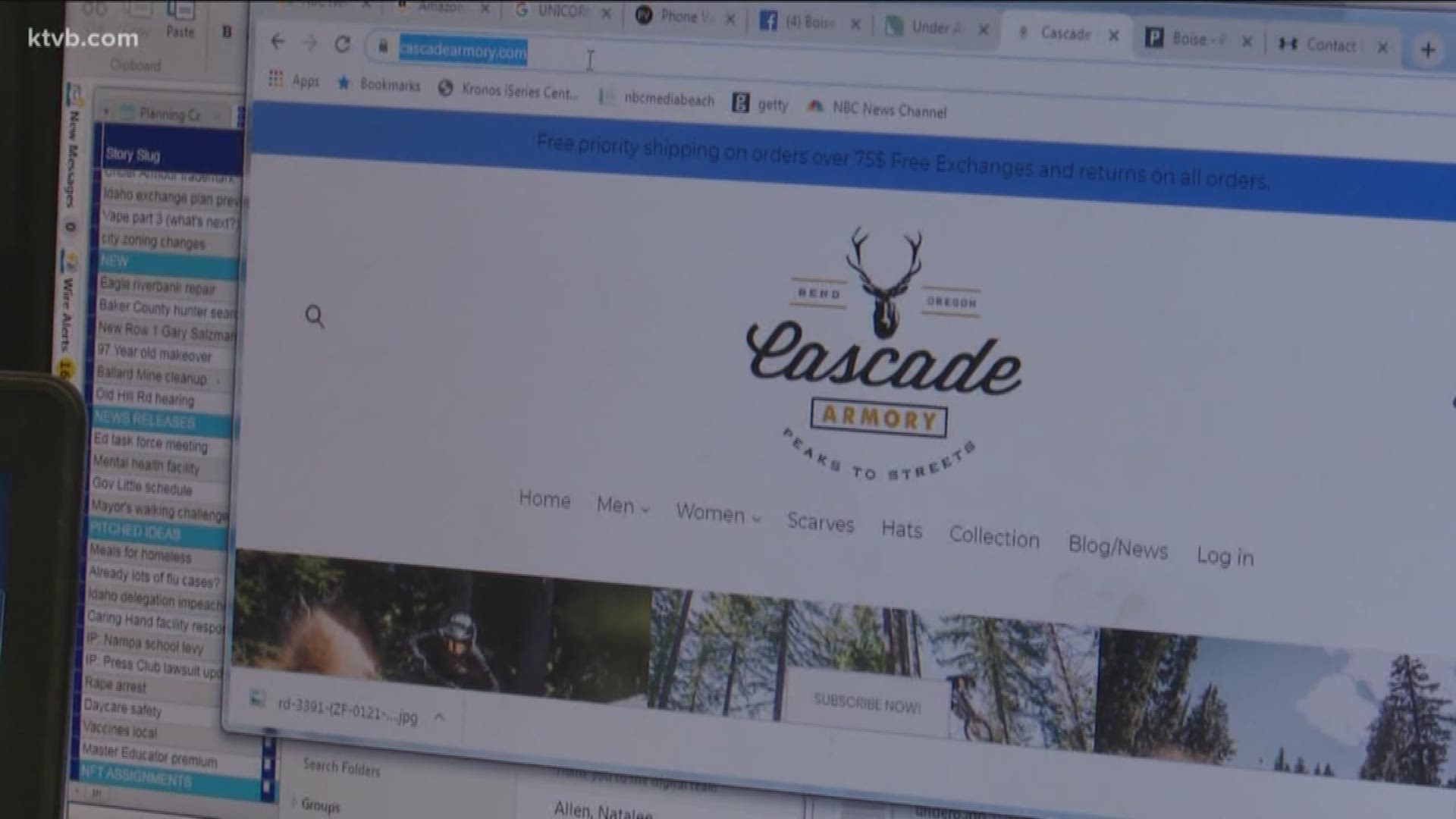 BOISE, Idaho — What’s in a name? For Alex Short, the answer is everything. Short and his wife, Diana, own a clothing start-up whose name, Cascade Armory, has landed them in a trademark dispute with retail giant Under Armour.

The Idaho Press reports the company officially formed in late 2017, but the way Short, who works at Micron Technology, tells it, it really started years ago, when the couple was still in college. Advertising through Myspace and word of mouth, they sold clothes to their friends and classmates out of their dorm rooms. Short says it got them through college, after which they both pursued their separate careers.

They couldn’t escape the dream. Eventually, they decided to “go all in,” Short said, and spend their life savings starting Cascade Armory. The clothes were designed with the Shorts’ community in mind — flannel button-ups, hoodies and beanies make up the unofficial uniform of Bend, Oregon, where the company is located. Currently, Diana Short lives there with the couple’s two children, while Alex splits his time between Boise and Bend.

The start-up saw success right out of the gate.

“And that’s what got us in trouble,” Alex Short said.

He believes the company’s rise from start-up to Pacific Northwest staple is what caught Under Armour’s attention.

The Shorts in early 2018 filed to trademark the name Cascade Armory, according to the United States Patent and Trademark Office website.

Later that year, when the trademark was set to be finalized, they received a notification that Under Armour had filed to extend the window to oppose it. The retail giant, which reported revenue of over $5 billion last year, sent Cascade Armory a cease and desist letter.

MORE TRADEMARK NEWS: 'The' Ohio State University wants to trademark the word 'THE'

“Your client’s use and application of Cascade Armory constitutes trademark infringement, trademark dilution, and/or unfair completion under federal law and various state laws,” the letter states, as reported by The Source Weekly in Bend.

“Trademark dilution” is the legal standard that gives companies like Under Armour the right to sue businesses that have similar names as them, even if their products offered do not overlap. Trademark dilution argues that a famous trademark or brand can lose its “uniqueness” or be watered down if another brand has a similar name.

“Their whole basis,” he said, “is that that people are only buying our clothes because they are confused and think that we’re Under Armour. At this point, we hired lawyers, and even they said, ‘Well, this is ridiculous.’”

“I understand they have to be aggressive about their brand, but this is overreach,” Leigh Gill, the Shorts’ lawyer, added. “No one is going to be confused.”

The Shorts and their lawyer originally were open to negotiate.

“I told them, ‘I’ll rebrand, but you need to compensate me for what I’ve put into this,’ and sent them a list,” Alex Short said. “Just for rebranding, it would have been about $200,000. They came back with a counteroffer of $200.”

The couple is still working through the dispute in federal trademark court, he said.

Under Armour’s patent lawyers told the Idaho Press to direct questions to the company’s corporate communications team. A spokesperson on the team said company policy does not allow them to speak on ongoing litigation.

Cascade Armory is not the only company to come under fire from Under Armour.

The first case to really bring national attention to Under Armour’s tactics was a company called, at the time, Armor & Glory. Now called AG365, the company markets itself as a “faith-based apparel” store and was forced to change its name after Under Armour threatened “an expensive and time-consuming legal battle” in an email, according to The Washington Post.

In its lawsuit, Under Armour claimed Armor & Glory’s name “is likely to cause confusion, mistake and deception” as to the two companies’ connection, which would “dilute the distinctiveness” and “further damage and irreparably injure” Under Armour’s brand, the Post reported.

Short said he knows of other companies facing legal action from Under Armour over trademark disputes, but the number is hard to count because, as Short said, most people aren’t the Shorts.

“They aren’t vocal, they get scared and they go away,” he said. “We’re not. This isn’t right. I’m not going to just hand over everything I built because you say that you own a word.”

For Short, the problem is bigger than Cascade Armory. It is an issue with the new ways businesses have found to circumvent laws against monopolies. Trademark law, he says, was designed to protect places like Cascade Armory: family-run start-ups trying to make their dreams come true. In the last few decades it’s “been bastardized,” he said, to protect the people at the top, allowing them to monopolize advertising.

Short explained it like this: If someone were to type “sweater” into their search bar, the first sites suggested are retail giants like H&M, Urban Outfitters, and so on. What they don’t see in their search is smaller, local businesses. They get crowded out. This is how “large companies are crushing the American dream, one small business at a time,” he said.

Because of the court battles, the Shorts and their company are on hold.

“This lawsuit is slowing down what we need to be focusing on. We can’t really plan because, given the nature of what they’ve done with other companies — you’re talking about half a million dollars just to stay afloat,” he said.

They’re still selling their products, and they have to be careful. They are trying to avoid having too much inventory because of the possibility they could be ordered to destroy the products — literally. If a company comes out on the losing side of a trademark battle, they are usually forced to destroy any merchandise with the old name, as was the case when Armor & Glory settled.

The same issue is preventing the Shorts from buying a storefront, something Short said he could really see going up in downtown Boise. They are restricted to selling online and in various stores in Oregon. If they were to lose against Under Armour, they would have to completely pull all advertising with the name “Cascade Armory.”

Despite their troubles, the Shorts are feeling optimistic because they aren’t going through it alone. A good friend of the family and brewery owner, Chasen Schultz, heard about their legal battles and rallied the community.

“It’s David versus Goliath,” Schultz said. “I thought if anything, we could help shed some light on it.”

Schultz and his Bend-based brewery, Riverbend Brewing, came up with an idea: Blunder Armour, an IPA they could sell and donate portions of the profits to the Shorts’ legal funds. They call it a “community beer” because they credit its success to the pride Bendites feel for their community. Several breweries around Bend have held tap takeover nights as a new approach to fundraising. Riverbend Brewing feature their beers at a business, and the proceeds from the night will go to the Shorts.

It’s not just Bend. The Shorts have received an outpouring of support from across the country thanks to a change.org petition started on their behalf. Called “Put an End to Corporate Bullying Tactics by Under Armour,” the petition has over 100,750 signatures.

“We want our kids to stop bullying but here we are doing the bullying,” one person wrote in the comments.

“This is massive corporate greed,” another said. “Get over yourself, Under Armour.”

A few months ago, Short got a call from another person being sued by Under Armour. He had found Short’s number from the change.org petition. The man told Short he’d never even heard of Under Armour, and the company sent him a cease and desist letter.

Short said he gets calls like that frequently. Sometimes people want advice. Other times, they just want to talk to someone who is going through the same thing. To them, knowing someone else is out there, fighting the same fight, is enough.