Boise officials say their process of continually updating the capital improvement plan without a hearing on each project is legal despite the wording of the law.

An Idaho Press review of city documents and meeting minutes tied to at least three projects paid for by impact fees since 2016 showed three instances of Boise’s Development Impact Fee Advisory Committee and the city council approving new capital projects without a public hearing. Examples include a new bathroom at the new Military Reserve bike and dog park, an updated trailhead at the Harrison to Hollow Reserve, and a new bridge at Marianne Williams Park in a project originally slated for signage.

Section 67-8206 of state statute says a government entity needs to hold at least one public hearing when seeking to amend, repeal or adopt its capital improvements plan.

Boise officials say their process of continually updating the capital improvement plan without a hearing on each project is legal despite the wording of the law.

Frank Lee, an attorney with Givens Pursley in Boise who specializes in impact fee law, disagrees with the city. He said the law is clear that Boise should not be making any changes to its building plans without letting the public weigh in, regardless of the size of the project.

Impact fees are fees paid by developers for new projects with the intent of making growth pay for itself and its impact on a city’s infrastructure and services, instead of the cost of such things as new public safety facilities or parks being borne by taxpayers who already live in an area.

Idaho law requires localities to create a capital improvements plan every five years that determines how impact fees will be spent. The plan is a list of improvement projects ranging from large undertakings like a new fire station or library branch, to additional restrooms in a park.

The city council holds public hearings whenever it adopts a new capital improvement plan. Boise last went through this process in 2016.

Instead of holding a public hearing every time a new project is added to the capital improvements plan, Boise officials say the city has a system where, every time a change is made, the plan is automatically updated without the need for a formal process.

According to Parks and Recreation Director Doug Holloway, the decision to update the CIP this way was done at the city’s administrative level. However, Boise City Council can change this process anytime.

“The CIP as included in the comprehensive plan basically catches all of the amendments as we do them because the language in the comprehensive plan, which is where the CIP sits basically, it says, as amended,” Boise’s Budget Manager Eric Bilimoria said. “Every time we do a budgetary adjustment to one of our projects, it is implied that it is updating the CIP at that time.”

One reason the city council does not hold regular public hearings on all of these projects is because of the sheer volume of projects the city is working on at any given time, Holloway said.

Any update to the comprehensive plan is already a six-month process, he said, and public hearings are held when the new five-year CIP is created.

“Administratively, it would be a nightmare, but it’s not required by state statute to go to a public hearing,” he said.

The projects do go before a public hearing after the fact in some instances, he noted, when the city adopts a new capital improvement plan every five years. City council also approves rates for impact fees once a year with a public hearing. At this time city council also approves the cost and timing of projects, which Holloway referred to as a “schedule.”

Lee said he did not believe this process of constantly approving changes without public input is in the spirit of Idaho law.

“The intent of statute is to give the public the opportunity to know about changes to the capital improvements plan, and to give affected members of the public a chance to speak up when a change affects them,” he wrote in an email.

Meridian’s City Attorney Bill Nary said city officials there review the capital improvements plan annually and hold public hearings for substantive changes, like adding or removing a project from the list. However, minor changes do not require a hearing.

How Boise’s impact fees are spent is decided by the city’s five-member Development Impact Fee Advisory Committee, who are appointed by the City Council. The group examines projects, like park additions, and determines if city impact fees should be used to pay for them based on the law. City council makes the final decision.

The Boise City Council has approved new capital projects to be paid for with impact fees in recent years, ranging in uses and geographic location. City officials did not provide documentation that any individual public hearings were held on any of the projects examined by the Idaho Press, other than the hearing conducted every five years when the new CIP is adopted or the annual hearing on impact fee rates.

In February 2018, the impact fee committee approved $200,000 in impact fees for a new restroom at the park in Military Reserve. This was a new capital project, which had not been included in the CIP, and it was later approved by the Boise City Council without a public hearing. The project ended up costing additional money, so the committee and council later approved an additional $85,000 for it in March 2019, with no public hearing.

The committee in February 2019 reviewed a trailhead improvement project at the Harrison to Hollow Reserve off of Bogus Basin Road. Committee members voted unanimously to create a new capital project for the trailhead and spent $500,000 of impact fees on the construction, which then was approved by city council. No public hearings were held on the matter.

This project has not yet been complete, but the funds will be used for a restroom and parking at the trailhead.

There are two kinds of park impact fees Boise collects. One is for local parks, which are collected in specific neighborhoods and can only be spent on projects in those neighborhoods, and the other is for regional parks. Regional park impact fees are collected from all over the city and spent on any park that is large enough to serve and attract visitors from the whole Treasure Valley.

The Boise River Greenbelt is considered a regional park as well, because it winds through multiple services areas and is used by thousands of people every year.

RELATED: Taking a look back at 50 years of Boise Greenbelt history 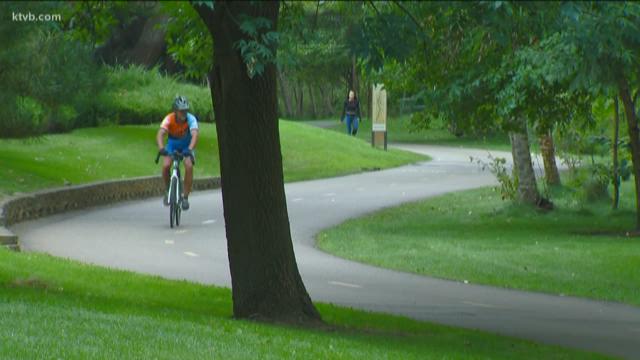 Although Boise is prohibited from spending money collected in one area on a different neighborhood, the city has flexibility to shift money from regional impact fees around the city.

To pay for the upgraded trailhead at Harrison to Hollow Reserve, the impact fee committee used funds originally planned to upgrade the Charles F. McDevitt Youth Sports Complex on Eagle Road. The funds shifted because a local lacrosse group that was going to match city payments to improve the sports complex backed out, according to committee meeting minutes.

Downtown Boise does not collect local park impact fees because the entire neighborhood is visited by Boiseans from every corner of the city, Holloway said. This allows Boise to use funds set for downtown parks in any other regional facility.

Not all of the city’s potential regional parks are near the city center. In the early 1990s, Boise purchased roughly 162 acres at 3891 S. Cole Road outside the city limits in Southwest Boise to be used as a future regional park for residents on the fringes of the city. The site remains undeveloped, with the exception of Fire Station 17, and is ineligible to receive impact fees because it is not annexed into city limits.

Holloway said he understood there might be concerns with regional funds moving around the city and not being spent exactly in the neighborhood where they were collected, but the idea of regional impact fees allows everyone in the city, and beyond, to benefit.

“The regional fee we are collecting is going for the greater good,” he said. “The whole concept is it benefits the entire community. Where the local (impact fee) is for only one particular area, but with the regional (fee) it’s great to have that flexibility so we can put money into a downtown park or Esther Simplot (Park). Still, keep in mind there is a set of criteria. It’s not that you just go spend them on any project.”