Boise moving ahead with hands-free ordinance

Chief Mike Masterson said during the presentation the city would be aiming to change drivers’ behaviors, not just push to hand out as many tickets as possible.

BOISE, Idaho — Idaho’s capital city could be the next to ban cellphone use while driving.

The Idaho Press reports Boise City Council on Tuesday gave the green light to city staff to move ahead with drafting ordinance language similar to the newly adopted policy in Meridian ticketing drivers for using mobile devices while driving, unless they are in hands-free mode.

Boise City Council President Pro Tem Holli Woodings brought forward the proposal, which was met with support from the rest of the council.

“We’ve seen in other cities in Idaho that having this kind of ordinance in place has resulted in more safety on the roads,” Woodings said. “Especially in Hailey, they’ve really shown the number of accidents instigated by people driving distracted when they’re enforcing this type of ordinance.” 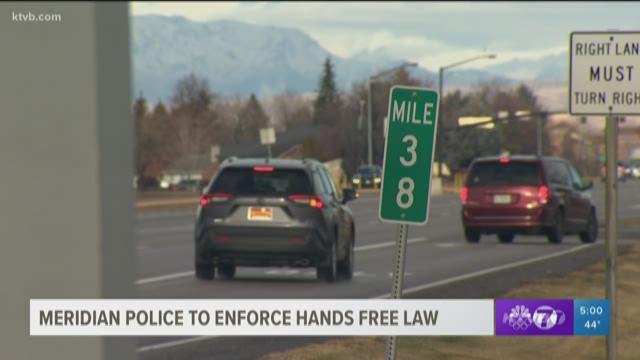 The proposed ordinance was written to mirror Meridian’s ban, which took effect Jan. 1. Meridian’s ordinance prohibits drivers from using their cellphones or any other mobile device that can accept data wireless transmissions while driving, including at stoplights. Exceptions to this include while parked and out of the flow of traffic and using a mobile device to report an emergency. First responders and public utility employees would also be exempt from the ordinance, if using a mobile device is necessary for them to do their job.

Other Idaho localities in addition to Meridian with a similar ban include Idaho Falls, Pocatello and Blaine County. Ada County floated the idea in the past few months, but it is not yet approved.

On the state level, Meridian Rep. Joe Palmer is proposing to overturn local bans and pass a state law that punishes distracted driving. Palmer’s bill, introduced last week, would allow police to cite dangerous distracted drivers, whether they’re talking on the phone, eating or grooming themselves. “I don’t believe an all-out ban is necessary, because we have a lot of rural areas,” Palmer said last week. “But I certainly think it’s not safe when you’re in traffic to use a cellphone.”

There was no mention of Palmer’s bill during Boise City Council’s meeting Tuesday.

City Council Member TJ Thomson was supportive of a citywide ban, but asked about the issue of ticketing drivers for using their phones at stoplights. Woodings said she initially thought using your phone while at a light was safe, but research she looked at said otherwise.

“I initially had the same feeling of why can’t people use their cellphones at stop lights, but it turns out when you’re using your cellphone, it takes 30 seconds for you to become completely aware of your surroundings again,” she said.

Interim Police Chief Mike Masterson said during the presentation the city would be aiming to change drivers’ behaviors, not just push to hand out as many tickets as possible. This would be achieved with a period of telling drivers about the upcoming rule change before consequences kick in.

“Our goal here in this particular city ordinance would be to educate first and regulate when needed,” he said. “We could see a reasonable time, two to three months, where we could have a heavy education campaign in our community.”

More from our partner Idaho Press: Farm near Nampa rezoned for light industrial after 2-1 vote