Oppenheimer Development says the company expects construction to begin in summer 2022 at 12th and Idaho streets. Plans also include several levels of parking. 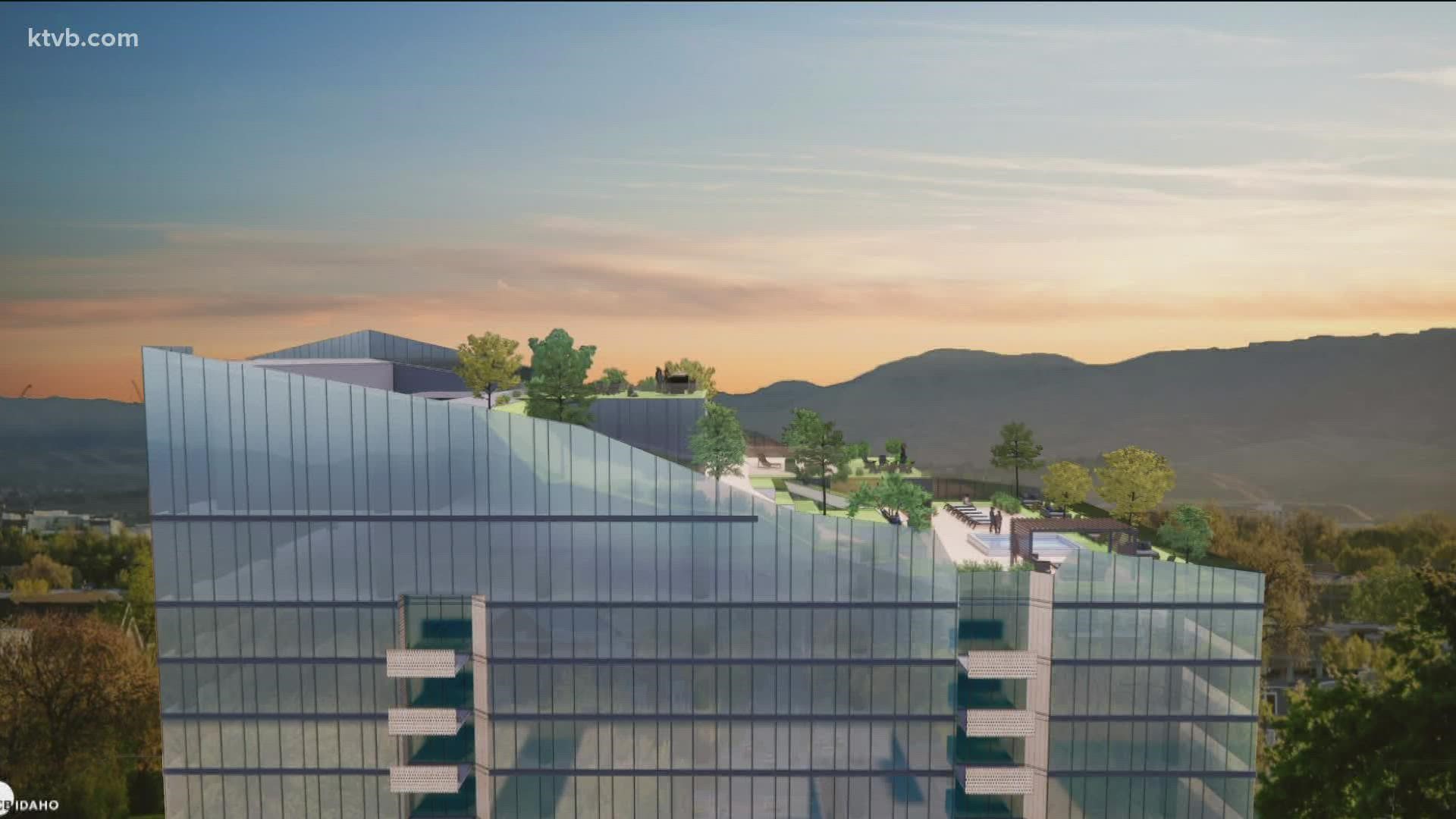 BOISE, Idaho — A 27-story building with a crown "inspired by the Sawtooth Range" may soon rise high above 12th and Idaho streets in downtown Boise, according to plans announced Tuesday by Oppenheimer Development Corporation.

Also, if the plan is approved as-is, it will be 330 feet high, which would make it the tallest building in Idaho -- seven feet higher than the spire atop the Zions Bank building just a few blocks away, at 8th and Main.

The development is planned to include 297 residential units, ground-floor retail, seven levels of parking - including public parking - and rooftop outdoor green space with access to "plentiful high-end amenities," Oppenheimer Development said in a news release, adding "there will also be some affordable housing included within the project."

ODC is based in Boise, and manages dozens of commercial properties in the city. The company is teaming up with White Oak Realty Partners and Ponsky Capital partners for the project. White Oak is based in Chicago. Ponsky is based in Cleveland, Ohio. The companies plan to begin construction in summer 2022.

"We thought by teaming up with (White Oak and Ponsky), we could learn from each other, and they would add a lot to the project and to Boise," Oppenheimer said.

The building site is situated near The Record Exchange, Idaho Power headquarters, and the 11th and Idaho building, which opened in late 2020.

"It'll be 200 feet along Idaho, and about 100 feet running north and south along 12th," Oppenheimer said.

Oppenheimer confirmed the site will be 1115 W. Idaho Street, what is now the surface parking lot next to The Record Exchange. Records from the Ada County Assessor's Office show Oppenheimer already owns the parcel.

While the surface parking lot will disappear, the seven-story garage included in the building will add 396 parking stalls.

"We think it will help add to the parking inventory of this western part of downtown," Oppenheimer said.

The building is designed by the architectural firm Solomon Cordwell Buenz and Associates. SCB has offices in Seattle, San Francisco, Chicago and Boston.

"We think this will add a lot to the urban balance, and we think the architectural quality will really stand out," Oppenheimer said.

The crown of the building would house two floors of gathering space interconnected by "thoughtfully landscaped steps and terraces, including a rooftop pool," ODC said, describing the crown as "both an expression and experience of a mountain top."

Credit: SCB Idaho
Artist's renderings of a 27-story luxury apartment and retail building proposed for the corner of 12th and Idaho streets in downtown Boise, Idaho. Oppenheimer Development Corporation is teaming up with White Oak Realty Partners and Ponsky Capital Partners for the development. The building is designed by Solomon Cordwell Buenz and Associates.

"We've been involved here for quite a number of years," said Oppenheimer, who was born in Boise and graduated from Boise High School, and later started Oppenheimer Development with his brother, Doug, in 1974. "We think this is another step forward, really, for Boise's downtown. We did the One Capital Center project many years ago; followed that with the Wells Fargo Center. We thought those were steps, as have numerous others who have developed really high-quality projects in downtown Boise."

Oppenheimer also said there's a lot to do before groundbreaking on the 12th and Idaho project.

"We've had preliminary discussions with the city, with the Capital City Development Corporation, with our neighbors that surround the area," he said. "It's wonderful to see Boise really being discovered. We've just got to make sure we don't mess it up as we go ahead with the various projects and planning that goes with any kind of growth."

1 / 3
Courtesy Oppenheimer Development Corp.
Artist's renderings of a 27-story luxury apartment and retail building proposed for the corner of 12th and Idaho streets in downtown Boise, Idaho. Oppenheimer Development Corporation is teaming up with White Oak Realty Partners and Ponsky Capital Partners for the development. The building is designed by Solomon Cordwell Buenz and Associates.