After failed attempts at recycling glass by ACHD, Boiseans left with few options

Boise does have a program that reuses glass in a useful way but still leaves residents with only two options. 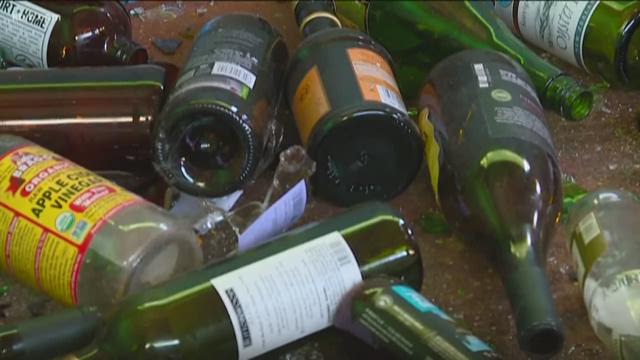 BOISE, Idaho — While Boiseans can recycle nearly all of their plastic and paper products with the Hefty EnergyBag Program" and the blue recycle bins, residents have only two options when it comes to recycling glass after previous plans to recycle glass failed.

In 2007, the City of Boise and the Ada County Highway District made an agreement for a glass recycling program - Boise would pick up all recyclable glass and give it to ACHD instead of paying to recycle it.

ACHD tried different ways to recycle the vast amount of glass it received, but each method failed.

"We ended up with all of this glass and we tried to reuse it in different ways, none of those methods turned out to be successful," said Natalie Shaver, a spokesperson with ACHD.

The Highway District tried to mix the glass with gravel to be used on the shoulder of roads and then tried to ship some of it to Salt Lake City to be recycled. Both ideas failed.

"So we ended up having to bury it, which is where we stored it before, which is our gravel pit," Shaver said. "I know it was described as more than a pile, it was more like a mountain."

ACHD says this was a one time failed experiment and no longer accepts glass from the city.

MORE: Mountain of glass piles up at ACHD facility

Boise does have a program that reuses glass in a useful way, but still leaves residents with only two options - people can drop glass off at one of 12 sites or leave it at the curb after paying a monthly fee.

"The city also offers a curbside pickup service that's once per month, that is an additional fee but for folks that use a lot of glass, they can certainly elect to have that picked up at their curb," Colin Hickman with Public Works Boise said.

Hickman says the glass recycling program is quite popular among residents. The city collects around 250 tons of glass each month.

"Once that glass is taken from homes throughout the city it is brought to a facility here in Boise where it's crushed, broken down and then that company uses it for industrial processes similar to sandblasting," he said, "The city is really fortunate to have a local partner here."