ACHD now has a road map for its projects through 2024. A big theme is to catch up with the growth the county has seen over the last several years. 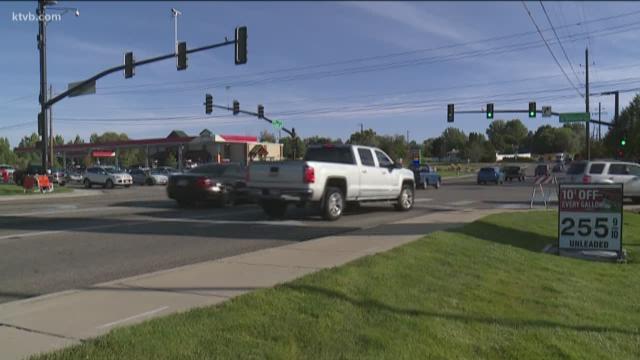 A big theme is to catch up with the growth the county has seen over the last several years.

Two major projects in the pipeline are to widen major intersections. Work at Cole Road and Victory Road is slated to start next year.

The document online states the intersection will be widened to seven lanes in all directions, and a median U-turn will be placed there as well. This is going to be similar to what was built at State Street and Veteran’s Memorial Parkway in 2018.

“We're putting in a median U-turn because we see the benefits for it,” ACHD spokesperson Natalie Shaver said. “It does help the safety issues which is our number one priority here at the highway district.”

Eagle Road and State Street is another area that could see more space soon. Construction is scheduled to start in 2022. The intersection would be widened to four lanes with a center median. The district would also construct a quadrant intersection.

"It’s always a goal we're providing Ada County with the best most functional roads we possibly can, so that’s going to be different everywhere,” Shaver said.

Boise resident Deborah Lasalle attended Wednesday night's meeting, and told KTVB afterwards that for her, the most functional fix would be additional bike pathways.

"We're wanting to see more of those low-stress bike networks that are tied networks that give people who have children access to the area,” she said.

She was at the meeting with a group that calls themselves the Boise Bike Boulevard Coalition, a grassroots effort to advocate for more bike pathways in the area. Lasalle said she can often be seen riding her electric bike as many places as she can with her son in the backseat. The current network has holes in it, according to her, and she wants those connected.

“I’m going to better maneuver through my town with my family safely in an economical way and with a bike network,” she said.

ACHD does have bike pathways in their five-year plan. The Shoshone Street bikeway is expected to see some improvements. The district lists in their plan that it will include way-finding, bikeway signage, a mini roundabout, and enhanced connections at Overland Road.

This Shoshone Street bikeway isn’t the only one scheduled to be upgraded. A planned bikeway at 11th Street would go from Fort to Heron streets. Another planned project is the Nez Perce Street bikeway, and would include way-finding, bike-way signage, enhanced crossings, and markings.

Shaver told KTVB that when ACHD works on their five-year plan, the district tries to think of all modes of transportation.

“So that’s thinking about cars, cyclists, and pedestrians,” she said. “We want to make sure everyone in this county has the best access.”

After adoption, ACHD now has 364 projects to start working on until 2024.

“Thinking about how our projects are going to impact everyone in the county and the best way to get these done to make sure everyone is satisfied,” Shaver said.

The estimate for all these projects is $878 million. That money will come from taxpayers, license plate registration fees, and grants.

According to ACHD, these projects aren't 100% guaranteed to be done. Changes can be made the year of, if the commission sees an area with a higher need or if the project is no longer needed.

RELATED: 'The idea is to make things accessible to everyone': Study recommends 70 miles of trails in Valley County