Some people disagree with Idaho Fish and Game's decision to relocate "Elliot the Elk" to Sawtooth National Forest. 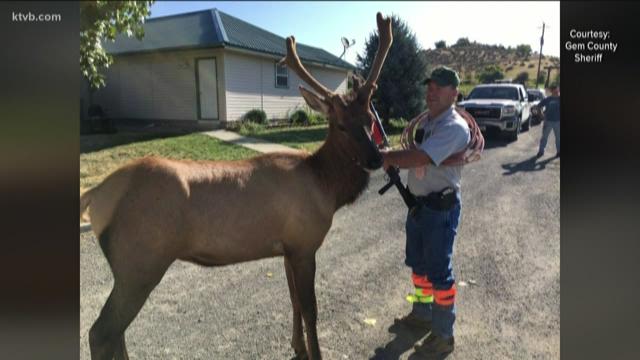 SWEET, Idaho — Dogs are the animals known as man's best friend but in Sweet, Idaho, that animal happens to be an elk.

They call him "Elliot the Elk," and he has made the town of Sweet his home for about two years. That was until Idaho Fish and Game relocated him to Bear Valley in the Sawtooth National Forest.

"As the animal matured we knew it was gonna be a problem," Evin Oneale, a spokesperson of Idaho Fish and Game said.

A Sweet resident said there were differing opinions of Elliot.

"Elliot should've never been put in the position that he's been put in," Kim Newman said. "He ended up relying on people that should've just left him alone to be wild, but other people just don't think that he should've been released the day before hunting season."

Fish and Game's options were limited for the bull elk. Oneale said they could have euthanized him, place him somewhere in captivity, or give him a fighting chance somewhere he might find a herd to join.

RELATED: Study: More elk killed by cougars than by wolves in Idaho

"We made a nationwide search trying to find a place that would take this bull [elk], but unfortunately we came up empty," said Oneale.

Word of Elliot the Elk's relocation has spread to the Treasure Valley.

"He doesn't even know how to migrate, he doesn't even have a herd to follow," Robin Shindelar said. "I just don't feel like where he was located was the best plan for Elliot."

Shindelar posted a video on Facebook of Elliot the Elk ducking his head into her husband's vehicle. Mr. Shindelar was on his way to a hunt when the bull elk approached his vehicle and allowed the passenger to scratch his head.

Robin Shindelar is a hunter herself, but she also considers herself a conservationist.

She doesn't agree with the way the bull elk's relocation was handled.

"There are a lot of ethical hunters that agree this is not the best situation for Elliot," Shindelar said.

Shindelar said that the elk has been found and is being looked after by some hunters at Sawtooth, but worries for Elliot the Elk's future with the thousands of hunters expected to enter the area in the coming months.

"This particular situation and his relocation location perhaps wasn't the best plan," Shindelar said. "But maybe we can work through that [with Idaho Fish and Game]."

RELATED: 'It was senseless:' Who would shoot and kill a horse in Parma?