Crews are hoping to prevent any future wildfires in the area. 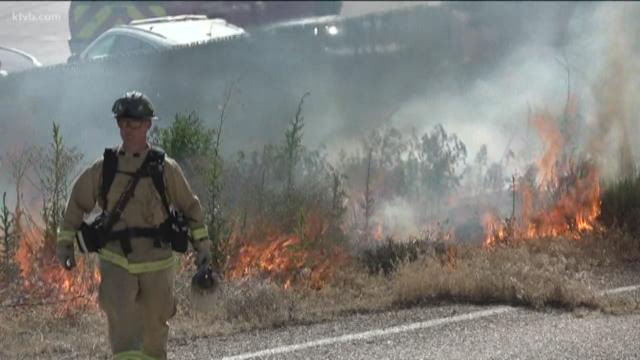 NAMPA, Idaho — If you saw any smoke in Nampa around noon on Wednesday, it wasn't from a wildfire. Nampa Fire Department was performing a controlled burn in a field between Ridgecrest Drive and Idaho Center Boulevard - right behind Bronco Motors.

A spokesman from Nampa Fire Department says they had three good reasons for scheduling a burn right next to hundreds of cars.

"We're trying to help eliminate some of the noxious invasive weeds on this couple-acre-lot that the city owns," said firefighter Jim Burdick.

Nampa Fire hopes that killing the weeds will help native grasses grow back in their place. It's also cheaper than using herbicides.

"It's a lot cheaper to come out here and burn it than it is to spray it," Burdick said. "We hope in the years to come after we get a certain amount knocked down that we'll be able to do a little chemical treatment."

"[The] City of Nampa is trying to increase their presence in the wildland fire community, so we're trying to get our folks some more training in that side of firefighting," Burdick said.

Firefighters were digging lines and using fire hoses to contain the fire. They also provided fuel in specific areas to lead the fire away from the Bronco Motors fence line and the road.

Related: BLM: Sparks from vehicles a top cause of Idaho wildfires

The fire department planned their prescribed burn a month ahead of time, giving notice to drivers by placing signs along Interstate 84 and scheduling the burn with Bronco Motors.

"I wanted to make sure they knew what we were going to do and why we were going to do it," Burdick said. "[Bronco Motors is] happy that we're gonna do it. I think we covered it every way we could to notify the public, but I'm sure the 911 center will still get some calls."

Nampa Fire doesn't have any plans for another prescribed burn this summer.

RELATED: 'Doing nothing is not an option': BLM hopes to slow down wildfires across the West with more fuel breaks