After a crippling winter, the town of Weiser is welcoming visitors back with open arms this week for the National Oldtime Fiddlers' Contest and Festival. 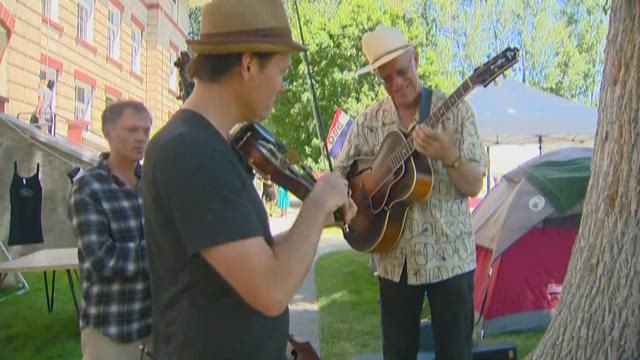 The National Oldtime Fiddlers’ Contest and Festival is well underway in Weiser. It's an annual event that brings hundreds of people to the area.

A lot of people attending the event are from out of town, so for them it's about music and having a good time. While it's that for those here too, this year, it's also a sigh of relief after a crippling winter.

"There's this group of incredibly talented musicians who come here," said John Donovan who is attending the festival.

Since 1953, the fiddle festival has been a staple in Weiser.

It became the National Oldtime Fiddler's Contest in 1963, and it attracts people from all over the world to this small Idaho town.

MORE: Thousands expected to flock to Weiser for summer eclipse

It's a tradition for this community, but this year, it's also a break after the extreme winter hit the area hard.

"During the winter time the town was crippled, you couldn't go anywhere,” said Campbell. “And now everybody's come in the don't know the difference of how much effect the winter had."

“Not being able to get people where they needed to be, to get them to go to work, we were concerned about emergency services, so everybody was kind of struggling to get through, particularly the first three or four weeks when we got hit with so much snow," said Weiser Mayor Diana Thomas.

With multiple roof collapses and a state of emergency, the mayor says it's refreshing to see some life in the city again.

"It reminds of what it's like to get back to normal," said Thomas.

The fiddle festival has a huge economic impact on the area. Campbell says this is big boost for Weiser.

“It's been estimated that it probably has a $3 to $5 million economic boost to the community by the time you roll the money over," said Campbell.

For Mayor Thomas the economic impact is great, but seeing the community come together is the best part.

"What we had happen during the snow event was a lot of volunteerism too, but this event, like several others we have this year, is an opportunity for people with a lot of different interests to come together and work together to bring our community in the forefront and welcome visitors that come here," said Thomas.

Organizers are expecting around 500 people to come to the fiddle festival on the busiest and last day, which is Saturday. The next big event, the solar eclipse in August, is expected to bring thousands of visitors to Weiser.