Five families near Council are stranded without power after the bridge to their homes was wiped out by flooding. 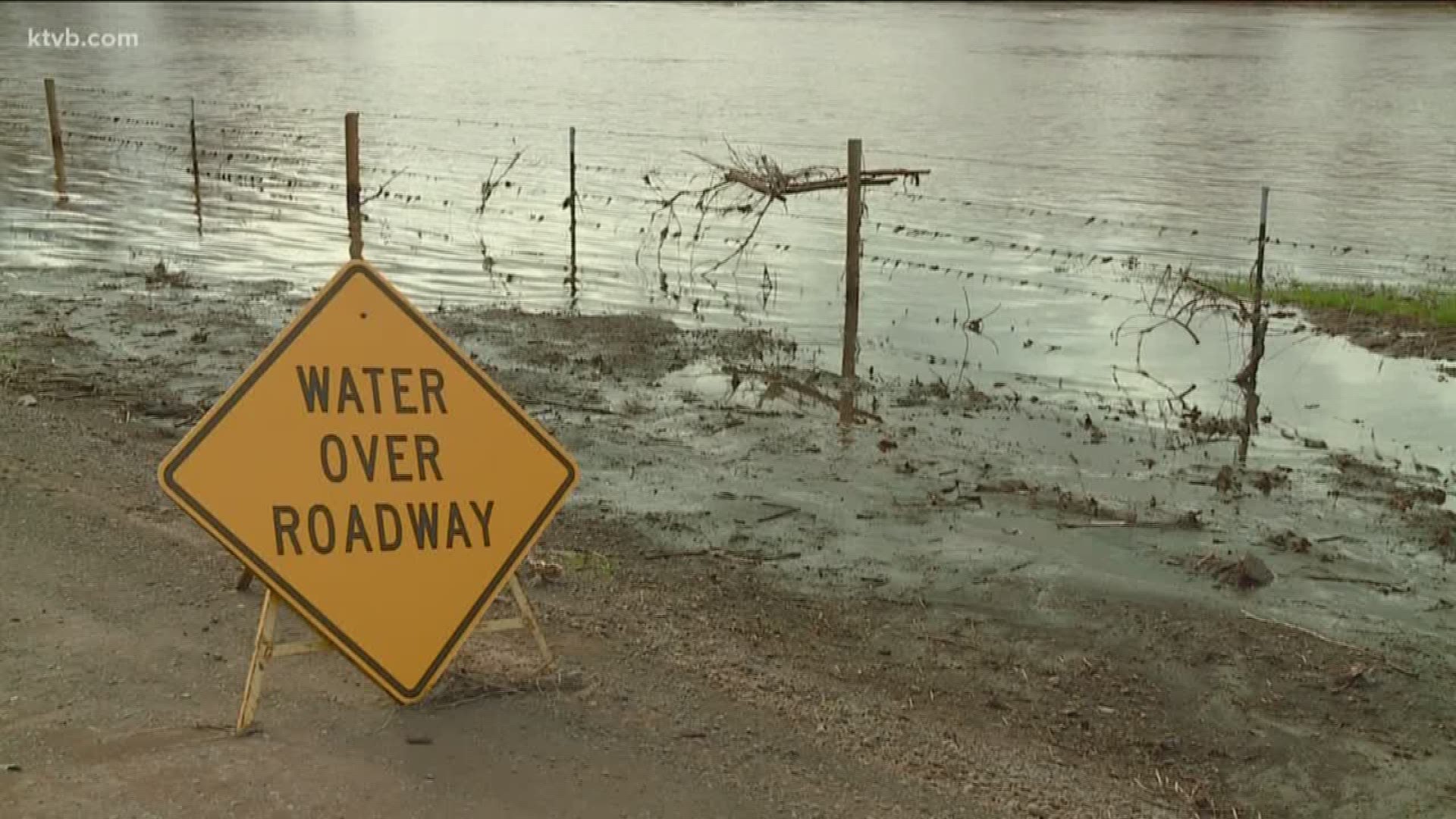 COUNCIL, Idaho — Flooding is continuing to leave damage behind in its wake across parts of Idaho on Wednesday.

U.S. Highway 95 from Payette to Weiser has been closed since Tuesday night because of all the water across the road.

Flood waters have also left five families south of Council stranded. Their homes sit on Jackson Creek Road, with a bridge over the Weiser River as their only access point. The embankment and road connecting to the bridge is washed out.

Michael Breske, who lives in the Jackson Creek area, said flooding is nothing new, but this time is a little worse.

MORE: Parts of Washington County under water after countywide flooding

KTVB also spoke with one of the stranded homeowners, Laura Lantz, over the phone.

“We’ve been stranded at home since Monday unable to cross the bridge because it got flooded by the river," Lantz said. “Two of our yards have been flooded, some fences have been taken down, and at about 3 o’clock yesterday afternoon, the power pole that had been wobbling for quite awhile finally went down, so we lost our power.

“Idaho Power is aware of our situation but they can’t get out here because the approach to the bridge from the highway has been washed out," she continued. "So no one can come in and no one can leave.”

That means nobody in those homes can go to work or run errands. And the kids haven't been able to go to school all week.

Lantz said they have wood heat so they're able to stay warm but for other things, they're relying on a generator. But she said basics, like milk or even gasoline to run the generator, are very nearly out.

Early Wednesday evening, Breske decided to try and get some fuel and other basic supplies to the stranded families.

“We’re all without power over here," Breske said. "I just delivered six cans of fuel to keep the generators going. I put a plank across the gap and we just shuffled it across.”

Lantz tells KTVB it was a little scary when the power went out, but overall they're trying to stay positive.

“We’re keeping the silver lining in the dark cloud here," she said. “It’s just a matter of, I just wish we knew when to expect things to get back to somewhat normal.”

It's not just homeowners and city residents feeling the effects of the flooding.

Jake Melder, spokesman for the Idaho Transportation Department, said its crews have been putting in a lot of hours and are stretched pretty thin.

“We’ve mobilized our crews from all across southwest Idaho," Melder said. "So here in the valley we’ve been relatively free of any of these hazards so we’ve shifted our crews over there. This weather event has been ongoing for more than 24 hours and so our crews have been working long, long hours. We want to rotate our crews out so they don’t get fatigued and for that reason, we’re running pretty thin.”

He said as for the roads, they are seeing some preliminary erosion along Highway 95. But, he added, they don't know the extent of the damage and won't until the water recedes.

Once the water level is low enough, road crews will inspect the Weiser bridge to check for damage. Depending on the inspection, Melder said the bridge could remain closed for repairs even after water levels recede. He also said there is no estimated time on when Highway 95 could reopen.

Melder said ITD also wants to remind drivers that with road closures and barriers in place, make sure and obey those signs.

“Today [Wednesday] we did have someone run the barrier [in Weiser], went on the bridge where water was running across it and water did what it did," he described. "Moved them off the road and he ended up having to be rescued by our crews there.”

Melder added that road closures due to flooding are always for safety reasons, and should never be ignored.

Credit: Logan Schenk KTVB
A pickup driver went around the road barriers in Weiser and ended up off the road.

Credit: Logan Schenk KTVB
ITD says a pickup driver went around a flooded road barrier in Weiser and ended up off the road.