'Right when we saw that, we started asking, is that true? And quickly realized it's not true,' a Boise School District official said. 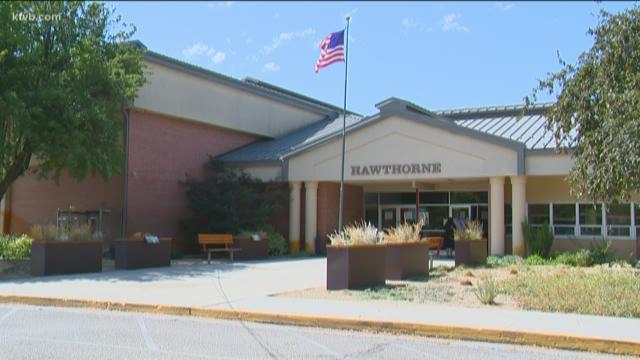 Hollar said the school was able to catch the mistake "about the same time."

"Right when we saw that, we started asking, is that true? And quickly realized it's not true," Hollar said.

The text message was directly sent to around 1,050 City of Boise employees, according to Mike Journee, spokesperson for the Boise Office of the Mayor.

One of the employees at a City of Boise-operated community center at Hawthorne Elementary accidentally pushed a button and sent the alert out, according to Journee.

That alert sent an automatic text about the active shooter.

As soon as it became clear the alert was a false alarm, a correction text and email was sent out by the City of Boise, Journee said.

"We apologize for concerns that this false alarm caused and assure you that we are working to refine this new system," Boise Police Department officials said in the statement.

"We greatly apologize for any consternation we might have caused parents or children as a result of this. It was an unfortunate accident," Journee said.

"There was NOT an emergency issue that occurred at Hawthorne this morning," Bright said in the email to parents and guardians that KTVB received a copy of.

All Hawthorne students and staff members were safe and unharmed while the emergency text was issued, Bright said.

"Again, this was an incorrect text that was mistakenly sent by the City of Boise, and we are in communication with the City of Boise to learn more about how this could have happened and how we can ensure that it will not happen again in the future," Bright said to parents and guardians in the email.

RELATED: A look at every school shooting and the warnings signs before they happened

In addition to the city's emergency text messaging system, the Boise School District officials have their own "student management system," according to Hollar.

"We do have an emergency text messaging system that we will not hesitate to use. We have protocol associated with that and procedures in place and we will certainly use that when the need arises," Hollar said.

Parents and guardians with children in the school district must subscribe to the SchoolMessenger to receive the emergency text messages.

Those who are outside of the school system but still want to be notified of an emergency situation can download Boise School District's mobile app to receive alerts Hollar said.