F-35: The sound of freedom - or aggravation?

The Idaho Air National Guard at Boise's Gowen Field is now on the short-list to become home to the next F-35 Joint Strike Fighter Squadron.  Those on the inside say Boise's chances are strong given our world-class ranges and available air space. However, others in the community say not in our backyard. 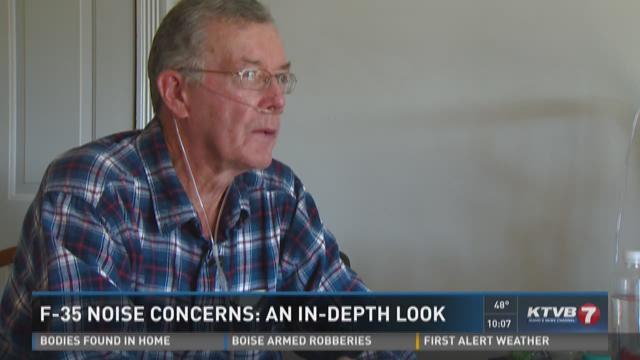 Boise -- The F-35 is described as the future of America's tactical aviation. Its loudness is the sound of freedom for many in America. For others, the noise is nothing short of aggravation.

The Idaho Air National Guard at Boise's Gowen Field is now on the short list to become home to the next F-35 Joint Strike Fighter Squadron. Those on the inside say Boise's chances are strong, given our world-class ranges and available air space.

However, others in the community say not in our backyard. KTVB has covered the F-35 informational meetings at the Boise Airport, where some in the community voice concern the F-35s would be too noisy.

Now, KTVB is reporting a different perspective. We thought, what better way to learn more about the impact of the F-35s than from someone who's already living with the noise? News anchor Kim Fields traveled to Hill Air Force Base in northern Utah, home to the F-35, to visit with a couple who four years ago were saying, "not in my backyard."

"I used to sit out on the patio," said Gary Slate. "It just grinds on you. It just, I don't know. It just gets to you after awhile."

Slate has lived more than 40 years in a Layton, Utah, neighborhood located two miles from the end of the runway at Hill Air Force Base. He says the F-35s are the noisest when they take off; landings are relatively quiet. During KTVB's hour-long visit at the Slate home, we could hear seven F-35s fly over the home.

"Once they changed the flight path, you can't have your windows open or anything," said Slate.

Slate's home is directly underneath the flight path of Hill Air Force Base.

In September 2015, Utah's Hill Air Force Base received the first of 72 F-35s. Slate says there are more supporters in his community by far, than critics.

Slate recalls some in the community telling him, "One of these times it's going to be the Chinese planes over your house bombing you."

Colonel Tim Donnellan, commander of the 124th Fighter Wing at Gowen Field, which currently flies the A-10, doesn't dispute the F-35 is loud.

"Yes, the F-35 is a noisy aircraft, however most jets are," said Donnellan. "If you sit out here and listen to the airliners, they're noisy. So if you live right underneath any airport, it's going to be noisy."

However, Donnellan says it won't be loud as often for Gowen Field because Gowen Field wouldn't have as many F-35s flying as Utah. Donnellan says that's the biggest misconception about the F35s - the number that would be based in Boise. He says it would be the same amount as the current number of A-10s at Gowen - 18 to 24.

"We roughly fly six to eight airplanes in the morning and the launch window is about 10 minutes," said Donnellan. "And then in the afternoon we do the same thing. So twice a day for about 20 minutes total is about what we do now and we expect that to be the same thing with the F-35."

Donnellan stresses it would not be 20 minutes of continous noise.

"It's each aircraft that takes off," said Donnellan. "So if we were to launch six in the morning, it would be six departures. And that's it. And that's all that happens in the morning. And in the afternoon, if we fly six, we'll fly another six."

Donnellan says very rarely would the F-35 fly over Treasure Valley cities. Most flying would be done in the Mountain Home Range Complex. He says the F-35 would take off from Gowen Field and head straight to the desert east of Boise.

But what about the F35 flight path? Remember, living under the flight path in Utah is Gary Slate's biggest complaint. Donnellan says they're still researching the best options for Gowen, but he says it would be roughly similar to the A-10's current flight path.

"There are only so many options you have to leave an aiport," said Donnellan."But there are things we can do that we don't do now."

For example, Donnellan says Gowen would be being very specific about how the F-35 would take off, turning at certain distances or using certain runways.

"So those are the things we're looking into and exploring," said Donnellan. "And I will guarantee you that we are going to have more of a strict way of departing and returning with an F-35 if were selected."

Donnellan says the strict measures would help mitgate the noise, something Gary and Leslie Slate say would help tremendously if Utah would consider doing with its F-35s.

The Slates were asked: "Have you just learned to live with it?" "You have to," said Leslie Slate.

The F-35 is expected to bring 2,000 jobs to Utah over the next decade. Local, expected job numbers aren't available yet. The Idaho Air National Guard's current economic impact on the local community is $155 million dollars annually with the A-10.

Slate says he agrees the noise is worth it when it comes to the economic impact. And he says he understands what the F-35 means in terms of America's military strength. If anyone can understand, it's Slate. He worked at Hill Air Force Base for 35 years on their aircraft as a sheet metal mechanic.

The military is expected to narrow down the five finalists to four bases this spring. A final decision is expected in 2019.

If Gowen Field is not selected to base the F-35s, the Idaho Air National Guard would continue flying the A-10 until they are divested.