The Luxe Reel Theatre is one of the things the city, and developer Hawkins Companies, think The Bridges at Lakemoor commercial subdivision is prime for. 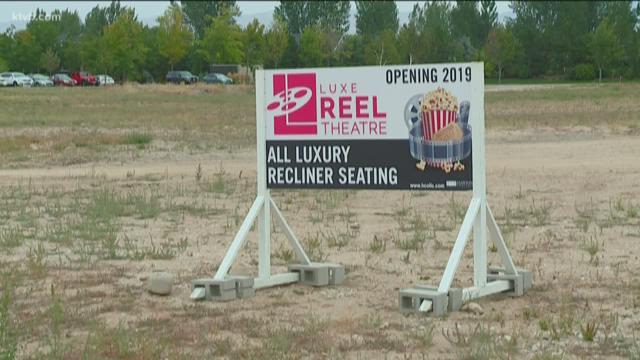 The bedroom community of Eagle is growing rapidly, and with more people comes the demand for more services. One local developer is answering that demand, with office space, restaurants, and a new movie theater.

The Eagle City Council took up design review approval for the theater at The Bridges at Lakemoor on Tuesday.

If you've driven on Eagle Road just north of Chinden Boulevard, you've no doubt noticed this new commercial development. T Sheets first came in, then a couple workout studios. And now a luxury movie theater is slated to go in next fall - the first in Eagle.

“It's the right time,” Hawkins Companies Development Partner, Paul Stephens, said. “Eagle is growing rapidly. It’s the highest incomes in the state. We are starting to get to the point of needing our own services.”

As the city of Eagle grows, with a population around 30,000 people, Mayor Stan Ridgeway says city leaders and planners are trying to focus on providing more services for people who live in town.

“You can still go down Old State Street and there’s corn growing, then there are all these large subdivisions. Then you go another mile and there's cows and horses. It is still rural but going through a change,” Mayor Ridgeway told KTVB.

He says not having to leave town – and add more traffic or spend money outside town – is important to residents – especially those over 65 years old who make up a big portion of the city’s population.

“People would really like to not have to travel outside Eagle to do things - I know I would. I think it will get a lot of use,” Ridgeway added.

He’s talking about a luxury movie theater: one of the things the city - and developer Hawkins Companies think The Bridges at Lakemoor commercial subdivision is prime for. Stephens says they’ll start building the parking lot in a week or two, “go vertical” around December and hopefully open the theater by October 2019.

The theater itself was actually approved a couple years ago - not without some backlash. Stephens says they listened to neighbors when they showed up at public hearings; throughout the design process they added additional landscape, separation from the road, and more.

“We really like Luxe Reel Group because they’re local. They’ve got experience in first run, not just second generation like here in the Valley. They’re a really good operator,” Stephens said.

However, Stephens says there won’t be food service during movies like in the VIP section of the Village Cinema. But there will be cushy recliner seats.

“People don’t want to maybe be interrupted nine or 10 times during a movie,” he added. “What they will have is all recliner seating – big wide seats that you can lay back. They’re going for the true movie theater experience.”

The theater is one of many businesses in the growing 25-acre development on Eagle Road, south of Chinden Boulevard, where the successful T Sheets calls home. Boutique fitness studios took over some of the space, while a second office building is in the works, along with restaurants, an organic grocer and more.

“We've got the shop buildings, we’ve got restaurants coming in here. They’ll probably be open after the first of the year; Café Yumm, Red Bench Pizza, Stella’s Ice Cream. We’ve got Stretch Labs coming in as well. So those are businesses we've got deals or leases we’re working on right now,” Stephens said.

“We saw a need, you know, there’s high demand definitely on the restaurant side. And we are seeing that we needed something, however, to go along with office. Daytime populations are not enough to spur those businesses to want to locate there so the traffic on Eagle Road is a big component of that.”

Stephens says the movie theater is an entertainment/commercial anchor tenant that will cover evening and weekend crowds.

“Going back to experience, we want it to kind of not just busy at one time and everybody goes away. We want it to co-mingle throughout the day, if you will,” he added.

Adding jobs is also important, as Hawkins Companies is hoping to house 700 to 800 employees on site once they are built out.

However, some feel this will bring more traffic to one of the busiest roads in the state, Eagle Road; others say it won't add to what's already there.

“A lot of residents will say why are you allowing this because it is going to bring more traffic and some residents will say I'm glad we have a movie theater here, now I don’t have to drive to Meridian or Boise or wherever,” Mayor Ridgeway told KTVB, “And if we get more high-end restaurants then there’s more options and it will actually create more Eagle traffic inside Eagle, not going somewhere else. And the other side of that coin is people will say well there are more people coming into our town.”

“At this time I don’t see us adding to the traffic more than what it is already today,” Stephens added. “The theater, the restaurants – it’s the current demand, it’s the current population, current traffic patterns that are drawing them and wanting them to locate there.”

In the bedroom community with a rural nature, this development is a sign of the times, of inevitable growth.

“While we can’t necessarily control someone selling their property if it fits within the comprehensive plan that someone can build there, but we can keep our standards high and that’s what we're trying to do,” Mayor Ridgeway told KTVB.

Ridgeway says the city is really heavy in residential taxes and light in commercial, so he feels adding more of this will take some burden off homeowners.

“You need to have controlled growth, it just can't get out of control. There needs to be a compromise, a moderation of growth that continues. Otherwise the city is going to fail. They need to continually see growth as well,” Stephens said, “So we can't have no growth and we can't have out-of- control growth; it’s finding that compromise. And I'd say every city is different.”

We want to hear from you: What do you think about the theater or about traffic?