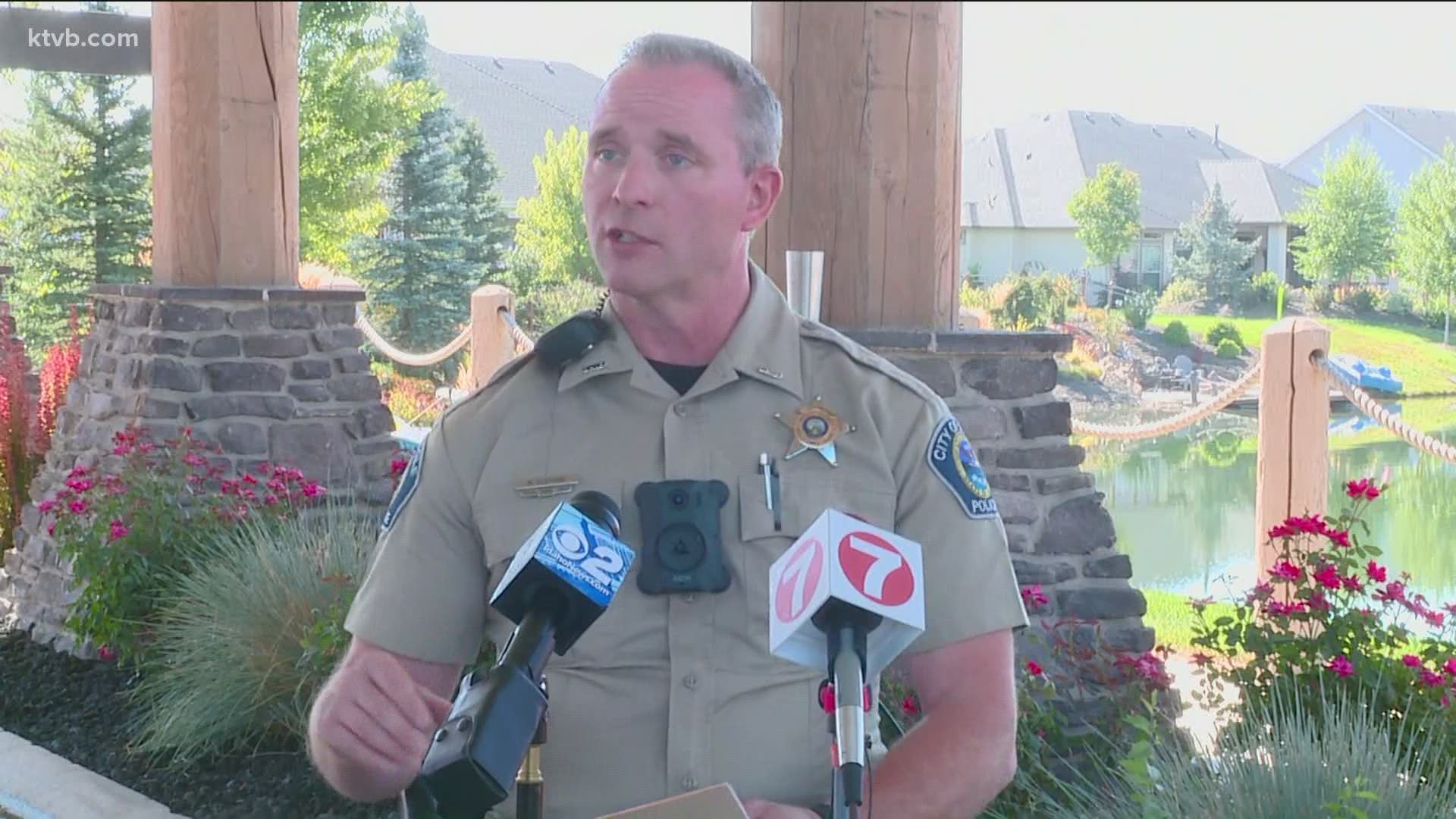 EAGLE, Idaho — Eagle Police Chief Matt Clifford delivered a press conference at 11:30 on Friday morning to give an update on the search for 2-year-old Rory Pope, the missing toddler from Eagle.

Rory has been missing since about 12:15 p.m. Wednesday near West Nordic Drive and North Arena Avenue. His grandparents were packing and preparing for Rory to return home from a vacation. Clifford said Rory took off running and was gone for a matter of moments.

The search began soon after.

Clifford added that Rory does have a history of playing hide and seek with family members, which is why it is so important for residents in that neighborhood to check their surrounding areas where a 2-year-old could hide.

Dive teams spent Thursday scouring ponds while police and deputies re-searched the neighborhood where Rory Pope was last seen. The search was called off Thursday night as darkness fell.

Hundreds attended two vigils on Thursday night to extend wishes to the family.

Ada County Sheriff officials tweeted on Friday morning that Eagle Police were continuing the search "with an emphasis" on searching the exterior and interior of dozens of homes near the residence on North Arena Avenue in the Legacy Subdivision.

They said detectives and officers interviewed residents and searched the area the last two days, but Friday's voluntary house searches "are more intensive and thorough," involving teams of officers.

More than 30 homes will be searched on a voluntary basis. Clifford said about 100 officers will conduct the searches throughout the day on Friday.

Officers have conducted an extensive search of the neighborhood Rory was last seen in and the surrounding area, utilizing drones, K9 units, bikes, dive teams and sonar equipment.

Rory's family has been fully cooperative throughout the duration of the search.

One of ACSO's K9 dogs was utilized early on in the search. A number of tracks were done with the dog who eventually tracked officers back to the pond near Rory's grandparent's home. However, Rory had been at the pond very recently before going missing, according to Clifford.

Sonar equipment and dive teams have also been utilized throughout the search. Waterways are commonly the initial focus in a missing child case. The canal in the North End of the Legacy Subdivision runs all the way into Canyon County, prompting officers in that area to run drones over their part of the canal.

ACSO also used their dive team to search through the middle of the pond. The water has almost zero visibility, making it extremely difficult to see anything, much less read sonar equipment.

Lack of visibility prompted officers to attempt to drain the pond, which they are hoping to complete today. Clifford said the search team has run into a few obstacles so far.

"It's not a simple process to drain a pond," Clifford said. "You have to put the water somewhere."

Clifford asked the Eagle community to extensively search their own space by looking under patio covers, in sheds, in vehicles and any other space a 2-year-old could crawl in and hide.

He also asked everyone nearby to rewatch their camera footage from Sept. 2 between the hours of 11:30 a.m. and 12:20 p.m. Should you find footage of Rory, Clifford asked that you call non-emergency dispatch and report it to an officer, stressing the importance of not sending it to police via email or social media.

Rory is white with curly blonde hair and was last seen wearing a lime green shirt.

The Ada County Sheriff's Office released a photo of the child just before 5 p.m. Wednesday. Authorities said the photo was taken earlier that day.

Clifford confirmed on Friday that Rory is from out of state and is in Eagle visiting his grandparents.

Detectives and officers have interviewed residents and searched the area where Rory Pope was last seen for the last two days, so today's voluntary house searches are more intensive and thorough physical search of the properties, with teams of officers.

The Ada County Sheriff's Office said Thursday morning that they would use "extensive sonar equipment" to search underwater in the ponds surrounding the neighborhood. Gene Ralston of Ralston Underwater Search and Recovery is volunteering his time and the sonar equipment to help, authorities said.

A dive team from Eagle Fire searched the water Wednesday, but found no sign of the missing child. There are about a dozen ponds or bodies of water in the immediate area.

The sheriff's office said in a Tweet Wednesday that search crews are fully staffed, and they are not asking for any more volunteers at this time.

According to the Ada County Sheriff's Office, there is no evidence that Rory was abducted, and the case does not meet the criteria for an AMBER Alert.

There are no signs of foul play associated with the search for the missing 2-year-old boy in Eagle. Situation does not meet criteria or idea for an “Amber Alert.” Multiple searches are happening right now to find the boy.