The Idaho Department of Environmental Quality said the influx of smoke in Idaho comes from California wildfires. 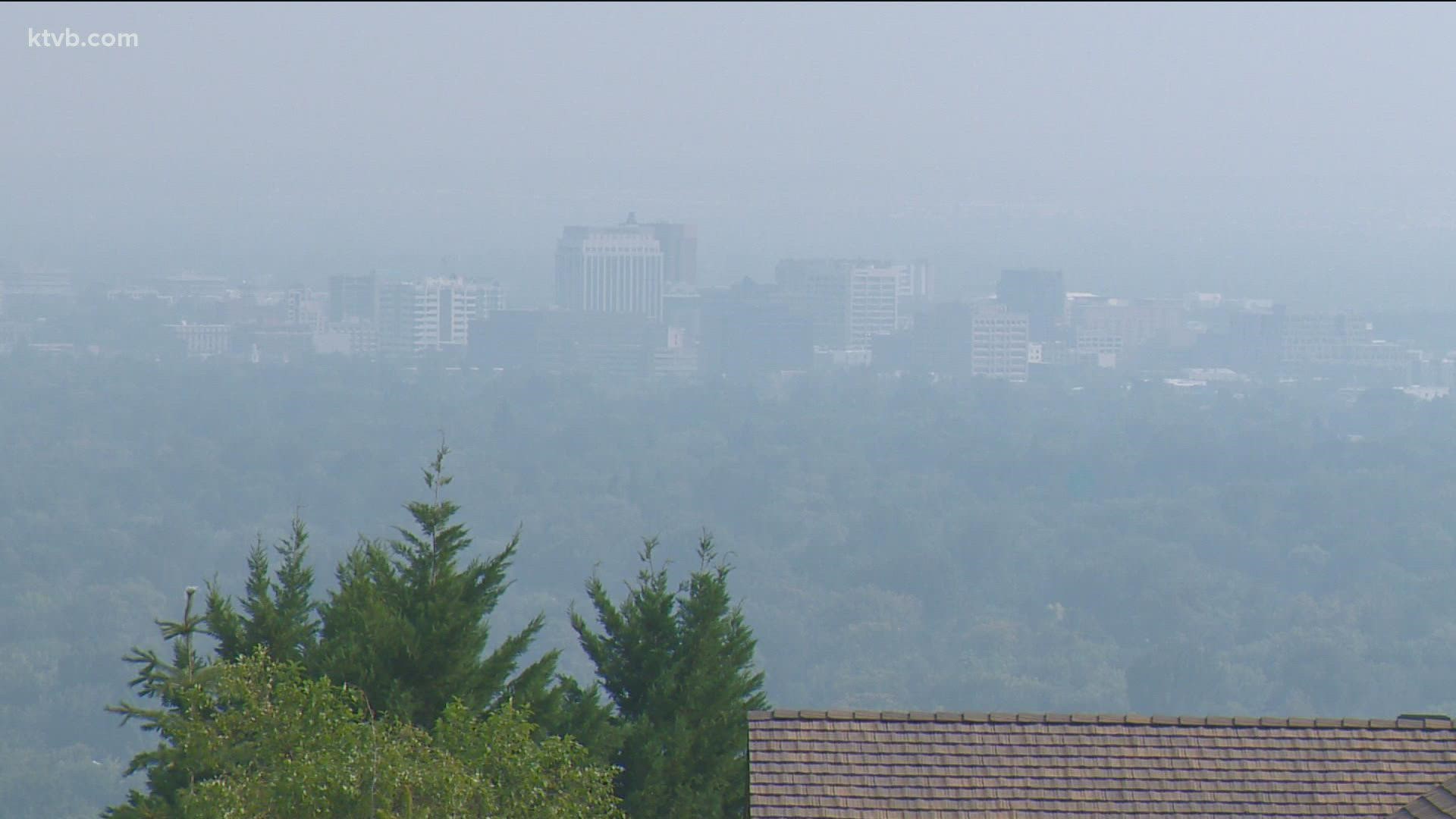 BOISE, Idaho — The influx of smoke from regional wildfires is reaching unhealthy levels for those who are active and outside for long periods of time. This means high school sports and other events around the Treasure Valley face another obstacle, outside of the pandemic.

"The fire activity in California is still going strong, there are still a few fires pushing up quite a bit of smoke," said Mike Toole, the regional air shed coordinator for the Idaho Department of Environmental Quality (DEQ).

That thick trail of smoke is something the Treasure Valley has been dealing with the majority of the summer. However, Toole said it's from a shift in this week's weather pattern called the "southwest flow," which is a counter-clockwise flow of smoke that is brought up from the California area wildfires to the Gem State.

"It's expected to stick around probably through this week, we're hoping for a pattern change later in the week," Toole said. He adds the Treasure Valley could also see that change this weekend or early next week.

On Tuesday morning and early afternoon, areas around the valley, like in Boise, Meridian and Nampa, reached over 150 in the air quality index (AQI) and put certain areas in unhealthy level air quality, also known as the red category (151-200 AQI).

Because those areas reached a certain AQI, dozens of outdoor athletic practices and games were either canceled or moved inside. Boise and West Ada school districts use the information provided by DEQ.

"Because the air quality was in the red category, specifically around 152 and 153, we canceled all athletic games today and moved practices indoors," Dan Hollar, the public affairs administrator for the Boise School District, told KTVB.

Boise School District tries to send notices of athletic and outdoor event cancellations from air quality by 1 p.m. for the junior highs and 2 p.m. for the high schools. The schools are working on trying to find a window to reschedule Tuesday's canceled games, it just depends on the air quality Hollar said.

Even outdoor programs and events at the city level, like the City of Eagle Parks and Recreation, monitored the air quality index from the DEQ. Beeg Johnson, the Parks and Recreation director, had to cancel Eagle Youth Soccer League practice, Just for Kicks Soccer program and Yappy Hour Splash Pad Special on Tuesday.

"If it's in the red, so 150 or higher, then we will cancel any of outdoor programming," Johnson said.

Parks and Recreation staff are working on rescheduling the soccer programs. However, the Yappy Hour Splash Pad will not be rescheduled.

Toole said as the day warmed up, the Treasure Valley was able to get some relief and the air quality dropped to the orange level (101-150 AQI). It's still something vulnerable groups, like children, older Idahoans and people with respiratory issues, should be aware of, according to Toole.

"Limit your exposure outside as much as possible and if you have to be outside try to avoid strenuous activities where you're exposing yourself to more smoke as you breathe more intensely or breathe it in deeper," Toole said.

However, Toole said because these next few days the air quality will be somewhere between orange and red levels, he advises everyone who plans to spend anytime outside to be cautious.

"That [smoke] can get so thick and really down in your lungs that if you can stay out of it it's probably going to be best for your health," Toole said.