After Concerned Boise Taxpayers provided to KTVB some of the records it received after filing a public records request, we reached out to the city and Boise State University for more information. 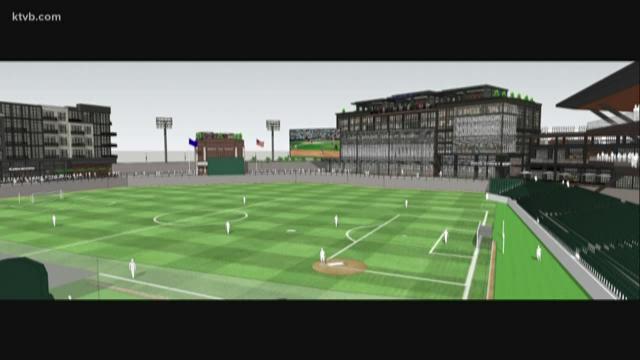 BOISE -- The proposed downtown stadium saga continues, with more information coming to light about Boise State University's involvement and more background into how long the City of Boise has been working on it.

The potential mixed-use Boise Sports Park is a hot-button issue in the City of Trees, and many have mixed reactions to the idea.

The group Concerned Boise Taxpayers filed a public records request with Boise State and the City of Boise to get documents about the stadium - a project the group is strongly opposed to, but one Boise city leaders hope will break on Americana and Shoreline next year. The group passed some of those records along to KTVB and we confirmed they are legitimate, so we reached out to the city and BSU to help shed a little more light.

"It's been part of the public conversation in downtown and around Boise for many many years," City of Boise spokesperson Mike Journee said.

But those opposed feel Mayor Bieter and the Boise City Council have been hashing out the details, promoting this private development and partially publicly-funded sports park, behind closed doors and away from the public.

"Well the mayor has a lot of private conversations with a lot of different people about a variety of different topics," Journee added.

Journee says the City Council has not met as a quorum to discuss this, and they have not made definitive decisions involving the spending of public money as a group.

Different media outlets in the Treasure Valley did cover the stadium dating back to 2014 and 2015, and at least one story mentioned a private-public partnership.

"That's a ridiculous assertion that anything was trying to be hidden," Journee said. "I think it's part of why the public elected Mayor Bieter: to have those conversations and to be looking out for the interest of the city."

But the opposition says they don't feel it's in the best interest of the city and many don't want their tax dollars going to a venture they feel is risky based on examples of unsuccessful publicly-funded stadiums.

"We're talking about a much smaller portion of public money here that at the end of the day is going to make a great asset come into our city," Journee added. "Those stadiums that are public and private are the most successful."

MORE: Who foots the bill for the proposed Boise Sports Park?

Journee says the $3 million the city is expected to pitch was set aside in the current budget year.

"That was a very public process that went all last year as part of our overall city budget process. In September that was finalized by council members," he added.

However, in going through the Fiscal Year 2018 Annual Budget, KTVB's Morgan Boydston could not find anything that specifically mentioned money set aside for the Boise Sports Park.

Meanwhile, documents we obtained dating back to 2014 show Boise State University President Bob Kustra met with developer and co-owner and operator of the Boise Hawks, Chris Schoen, and his company Agon Sports and Entertainment on multiple occasions to discuss a baseball stadium.

In July of this year, Agon Sports (ASE) sent a letter to Boise State, outlining a stadium licensing agreement letter of intent. It says, in part, "It is presumed that BSU would be a tenant in the planned downtown Boise Stadium (Venue) under the Stadium Licensing Agreement executed between ASE/BPB [Boise Professional Baseball] and the City of Boise and seek to accommodate dates for BSU Baseball as well as the BSU Women's Soccer Program."

The proposal says BSU would be granted a seven-year lease with three one-year extensions for their new Division I baseball team and women's soccer program. The document states BSU would pay $400,000 per year and states a capital requirement of $500,000 is involved, "in anticipation of a 1,200 sq ft BSU locker room with an additional 1,000 sq ft of dedicated office, storage, and wet areas. This Capital Requirement is an estimate and will be charged to BSU as part of base construction of the venue."

The 'Terms & Fees' section also states the university would pay $25,000 per year for the same lease length for operating costs to practice and play some games at Memorial Stadium.

But Boise State sent the following statement to KTVB this week:

"We have always been open to the idea of a downtown stadium because of the opportunities it provides for baseball and women’s soccer. We are still exploring all aspects of a stadium use agreement, although nothing has been finalized at this point and we will do our due diligence to explore all options."

BSU Spokesperson Greg Hahn said continued discussions are taking place and if Boise State officials agree to terms that would warrant the next step, the university would take the proposal to the State Board of Education. He also reiterated that Dr. Kustra has been open about the possibility of a collaborative project for a long time, one example being in the media from 2015 when Curt Apsey was hired as athletic director.

When asked about the proposed terms outlined above and whether the university has a timeline on when they'll make a decision regarding participation in the stadium, Hahn said there is no set timeline and that he could not comment on the discussions.

While the mayor and council members are out working to make this happen, this sports park is not a done deal.

"This is a proposal that has come forward," Journee added. "Ultimately the policy makers have to make that final decision and they haven't done that yet."

Another open house is set for Monday, Oct. 16, from 10 a.m. to 4 p.m. at City Hall. The city is asking for the public to weigh in there and online using this Boise Sports Park Comment Form