Some people we talked to spend hours waiting in line at the DMV office off Fairview Avenue in Meridian Tuesday morning. 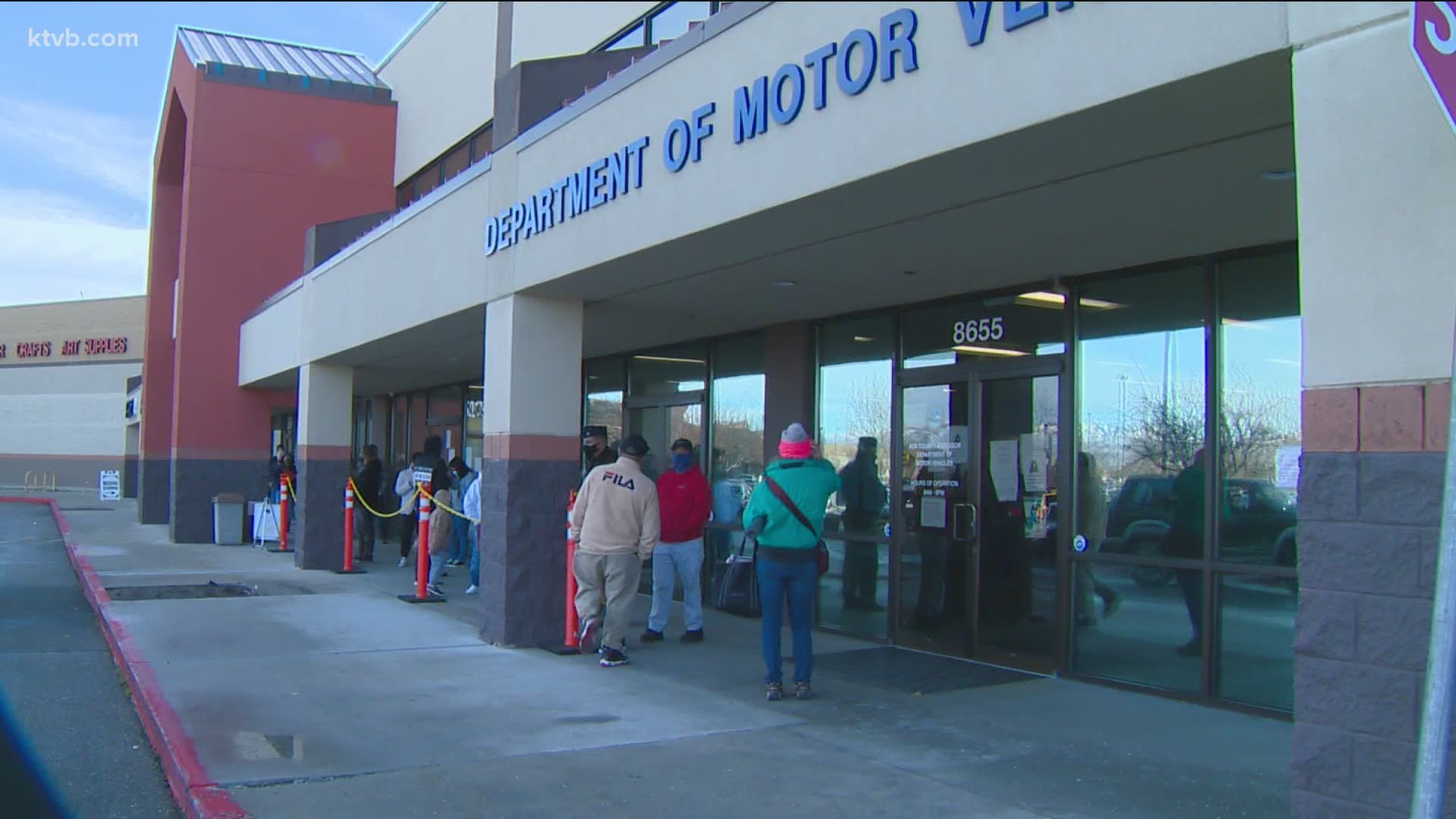 MERIDIAN, Idaho — It may be a new year, but it’s still the same old thing at the DMV -- lines are out the door.

Some people we talked to spend hours waiting in line at the DMV office off Fairview Avenue in Meridian Tuesday morning.

When they opened at 8 a.m. there was about 50 people waiting to get inside. Two hours later, the line remained about the same.

“The line was out the door and all the way down that complex with probably at least 50 or more people in line, and I just said no, I’m not doing this,” said Val Dorman, a 72-year-old Meridian resident.

The lines at Ada County DMVs have been longer for two reasons.

One, they are practicing physical distancing and have to limit the amount of people inside the building.

Two, the Idaho Transportation Department is in the process of transferring over 8 million DMV records from an old system to a new one called the GEM system. This is slowing things down a bit.

The transfer from the old system to the GEM system started in October.

ITD says the system has had some time to stabilize, but still needs more.

People like 72-year-old Val Dorman can’t go through the long lines at the DMV.

He’s a disabled veteran and can’t stand for extended periods of time, so he has to get things done through ITD's website.

“Basically I was trying to renew my fifth wheel travel trailer registration to get my new tags, which were due in January of this year, so I started around November 5 trying to get them online and it wouldn’t let me register,” Dorman said.

Val says he didn’t have a great experience.

But the website finally worked for him Monday evening.

Val wasn’t alone with his complications.

We’ve had multiple people tell us they had the same problem with the website.

ITD says online RV and travel trailer registration renewals were temporarily paused this fall after they transitioned to a new registration and titling system.

That service is now back up and available as of late December.

So if you’re like Val, and couldn’t get the online services to work, try again.

Officials tell us the GEM system transfer is still underway.

ITD asks people to bear with the changes, and say wait times at the DMV will gradually get better.

Construction is set to begin soon on a second Driver's License office in Ada County, but because DMV service will not be available there, it is not expected to impact the long lines.

The Ada County Sheriff's Office says the new building will be located on the 700 block of South Progress Avenue in Meridian. That's a few blocks north of the Meridian Road exit at Interstate 84 (just north of the WinCo).

Construction is scheduled to be finished by the end of the summer.

The Meridian office will be able to handle growth up to 16 customer service windows, a total of 16 testing stations, and will have plenty of parking.

The sheriff's office says they have been pursuing his project for years and are excited to finally begin. If all goes as planned, it should be open by fall 2021.