Dale Harsin lost a finger due to an infection that started after he was bitten by a spider. 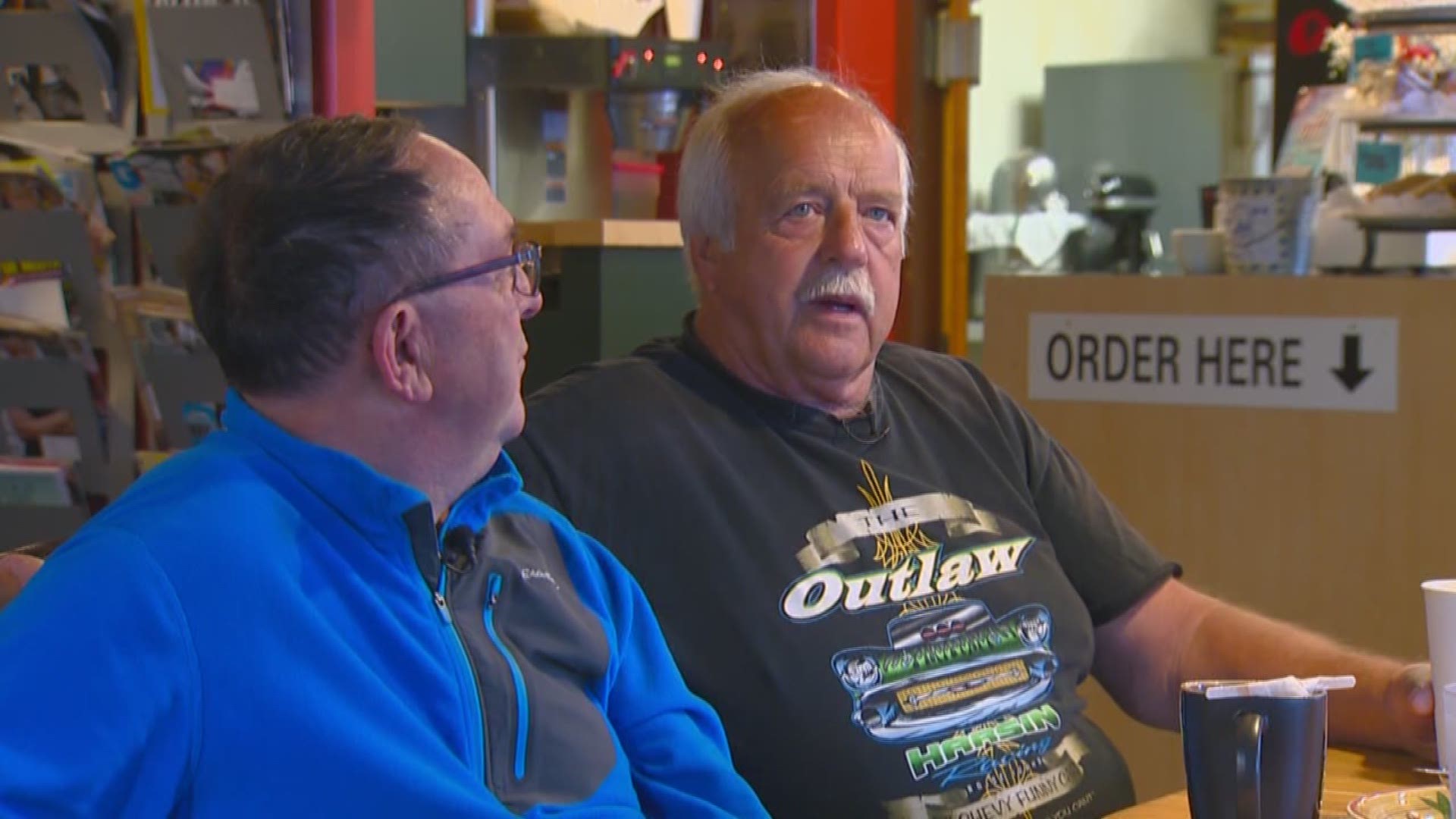 BOISE - Each and every morning for well over a decade, Dale Harsin jump starts his day at River City Coffee.

Accompanied by his closest friends, each cup of coffee awakens another memory, the day brightened by a laugh, and the bond between growing stronger with each sip.

"I think Dale is the most famous person that comes into this coffee shop," joked one of Dale's friends.

Depending on the morning, some memories can be more gripping than others. One in particular can even move the members of this group to tears.

"We tried to get him to go to the doctor," Dick said, as the tone at the table began to change.

In the end it served as a reminder that listening to the advice of a loved one can prevent you from becoming the next story at the coffee table.

"I look back I probably should've went to the doctor, but I didn't," recalled Dale. "That's just the gamble that I took. It cost me a finger."

It's a role that Dale Harsin has played for over 40 years now.

Dad is a title he loves, something he has proved through unconditional support.

"I remember growing up, he may have missed one or two practices in everything I did," said Dale's son, Bryan, the head coach of the Boise State football team.

"It really hasn't changed. As far as a parent goes and support, I think he's one of the rare ones that's been there the entire time," added the younger Harsin.

Ever since his son got into coaching, Dale has continued to man his post on the sidelines. His yearly routine includes the annual trip to the bowl game.

"I enjoy just getting to drive there," said Dale, "and as you're driving along, you see a lot of fans and people and that's a really fun time to see."

This year, the commitment was no different, but the journey was more frightening than ever before.

With Boise State already in Arizona gearing up to play Baylor in the Catus Bowl, Dale was still in Boise getting ready to leave.

"I was moving some stuff from a storage unit. I told Janet, my wife, that I had a little bump there on my hand," explained Dale. "I never thought much about it and the next day it had swollen up on Christmas Day."

"Some kind of a spider bit me," he added.

The next morning, with his truck all packed, he followed his normal morning routine. But this time, instead of listening to the people he trusts, he ignored them and hit the road.

"The skin was black and red and swollen," said one of Dale's coffee table friends.

To which Dale replied: "I took some antibiotics and thought that this will help.

Dale eventually made it to Arizona and all the way through game day. But the following afternoon, ignoring the pain no longer became an option.

"By the time [I] reacted, it started eating by skin up," said Dale. "Then I got a MRSA infection in it and the antibiotics they give you, it started messing with my kidneys and doing weird stuff."

Dale spent the next 12 days at a hospital in Palm Desert.

There he had two surgeries as doctors began to cut away at the hand to remove the infected areas.

"In my mind, you're going to cut a little piece out, it's not going to be too bad, they're just going to take that infection out," explained Bryan. "There's obviously going to be some stitching."

"Then you get the picture and half his hand is cut open and laid open and you can see then tendons," he recalled. "That's when it really hit me."

THE RETURN TO BOISE AND RESCUE MISSION

After the procedures, Dale found a small window that would allow he could leave California; his hope was to find better care and comfort at home.

"They told me that I couldn't have any antibiotics for 48 hours and I told them I wanted to go back to Boise because the family and everybody was there," Dale said.

"They basically broke out of the hospital," recalled Bryan, "and they were on their way to Boise at that point."

So Dale, his wife, Janet, and his daughter, Tera, set out to begin an intimidating trip back to Boise. Dale's open wound required them to stop every two hours to soak it in epsom salt.

Along the way, their quest to find comfort back at home would spin out of control.

"We were driving home and we were 80 miles from Ely, we hit black ice," explained Dale. "We crashed the truck out in the middle of nowhere."

It was two o'clock in the morning; without cell service and heat, they were finally able to flag someone down an hour later.

"To be honest with you, it scared me bad," recalled Dale.

"There was a guy from Jerome that was coming by," he continued. "He stopped and gave us a ride into Ely."

Safe and sound - at least for the moment - in Ely, there was still the pressing need to get Dale back to Boise following the crash.

"The first I heard about that there was a phone call at maybe 4:45 or 5 o'clock in the morning," Bryan explained.

"The weather is not good. It was snowing," he added. "The first thing I started to do was gear up and start getting ready to make the trip, then that gets crushed in a hurry from my wife."

With limited options and time passing quickly, Bryan then phoned a friend.

"At that point, it was how do we figure this out after that phone conversation," he questioned.

"So I called Jacksons Jet Center, they were open," Bryan explained. "The amazing thing was there was a plane available, there were two pilots, and they were ready to go. That became the plan."

By 10 o'clock in the morning, Dale was back in Boise.

Dale was rushed to St. Luke's, where he spent the next 16 more days in the hospital. But the damage was already done, the infection was so deep it was likely irreversible.

So he opted to have them remove the infected finger rather than try and continue to fight the infection.

On Dale's road to recovery, attitude has been everything.

"He doesn't shy away from it," said Bryan. "I know this, for somebody that has done things with their hands their entire life, there's not a better way to handle it than the way he's handling it right now."

On that note, I quickly discovered that when you hang out with Dale Harsin, you can't be afraid to get your hand dirty, after all he still isn't.

"I love it," replied Dale when asked about the passion for working on cars.

Not only is Dale back to spending time in the garage, but he has also returned to his perch at River City Coffee.

"They saved my spot at the coffee shop," laughed Dale. "They didn’t fill it. They made a sign so that nobody sat in my spot."

In the end, he lost a finger but he still managed to gain something; a better understanding of his friendships, and the actual value of each cup of coffee.

"You walk in the door and thank god you’re still here," said Dale. "You get up and you be thankful for every day."