Investigators have ruled out lightning as a cause. 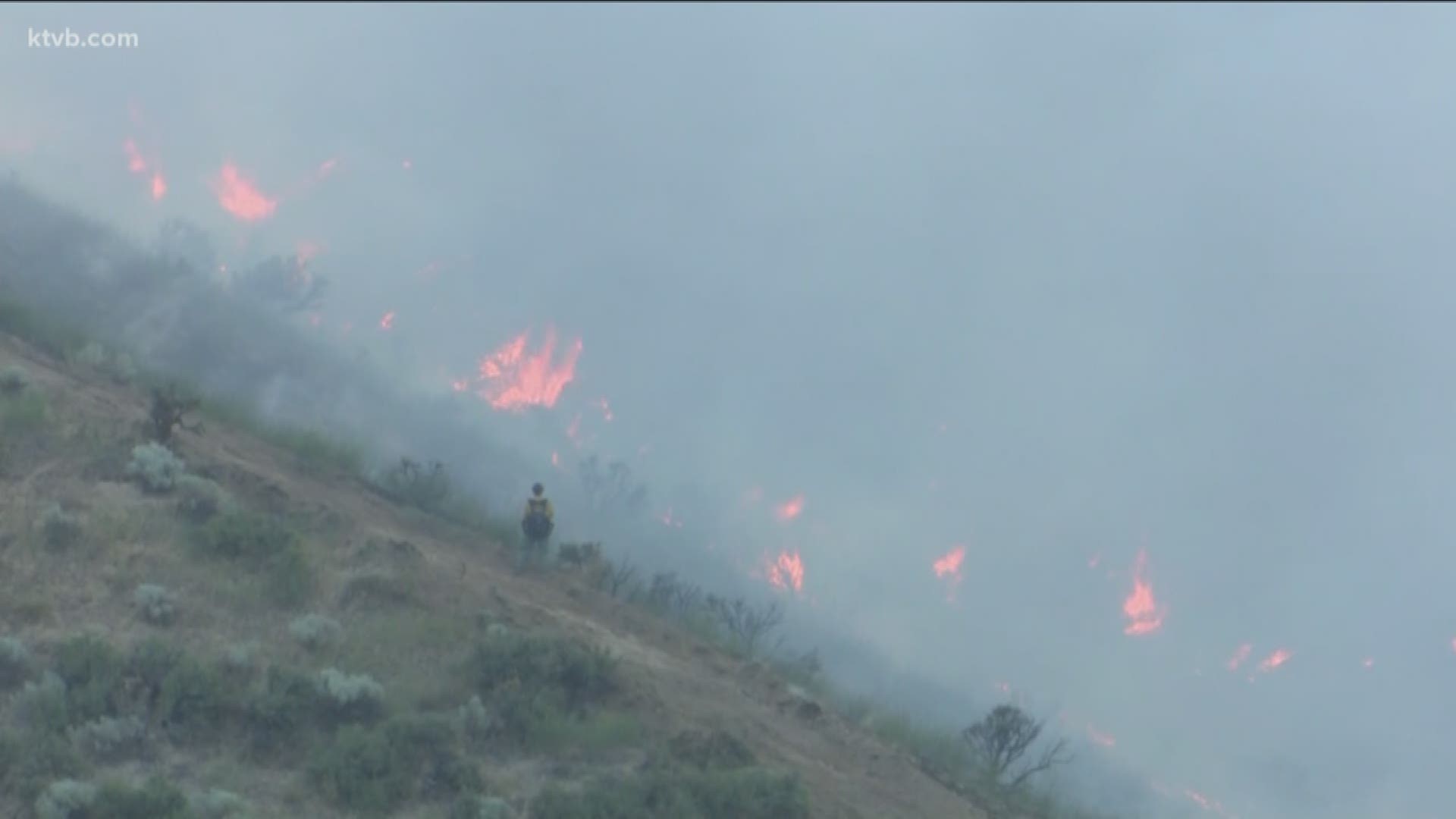 BOISE, Idaho — A trio of fires that sparked early Thursday near Lucky Peak State Park east of Boise have been deemed "highly suspicious," according to Boise National Forest officials.

Investigators are still working to determine how the blazes started, but have ruled out lightning strikes.

Two of the fires remained fairly small; the third, dubbed the Lucky Fire, was originally thought to have grown to 150 acres, but the Forest Service said it grew to 104 acres.

Gov. Brad Little, who toured the burned area in a helicopter, noted that conditions are right for fire in Idaho.

"Today was the first fire in the valley - matter of fact yesterday morning when I went into the Capitol, I commented it's almost the first of August and we have no smoke in the air," Little said. "I got up this morning like everyone else did and lo and behold we had smoke in the valley."

Bob Shindelar, forest fire chief for the Boise National Forest, credited firefighters from stopping the flames from pushing out further.

"Even though it started in the middle of the night, we were able to get our crews out there quickly," he said. "They worked hard and did a great job, and stopped the fire at a fairly small size."

Little agreed, pointing to the difficult terrain firefighters had to contend with.

"It's pretty impressive they got around that by hand with the one dozer, that they got it around," he said. "That's pretty steep terrain."

All three fires sparked at about 1 a.m. in the hills just off the Idaho 21 High Bridge. Arrowrock Road was shut down to all traffic from Idaho 21 to the Spring Shores Marina Thursday but is now open with a pilot car.

Idaho Power crews are working on repairing power lines across the road that were damaged by the fire.

A spokeswoman for the U.S. Forest Service said that crews have put in dozer line around half the fire and hand line around the other half, effectively stopping the flames' forward movement. She stopped short of calling the blaze officially contained, however, and said she could not give an estimate of when it might be fully out.

About 100 firefighters are currently working on the fire, with a water tender, bulldozer, fiver engines and aircraft, including helicopters and fixed-wing planes.

No homes or other structures are currently threatened, in addition to the power poles, a guardrail had been damaged, according to the Boise National Forest.

The burned vegetation also creates the risk of rocks and boulders rolling down from the slopes above Arrowrock Road.

Shindelar said the destroyed vegetation could hurt wildlife as well.

"The habitat that it has destroyed affects wildlife especially - this is the prime area for winter range, so for deer and elk, it's definitely a significant impact for them," he said.

Despite deeming them "suspicious," officials have not yet confirmed whether the fires were caused by a human.

But Shindelar said that every Idahoan need to do their part to prevent potentially devastating fires as we move into late summer.

"It's August, and August is generally the peak of fire season across most the western states, especially here in Idaho," he said. "This is a time when the public needs to be very cautious with the use of fire."