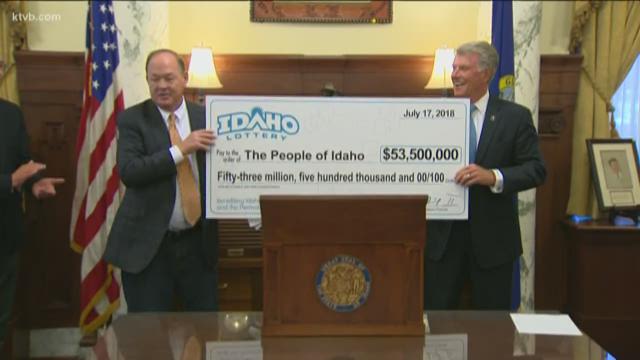 It was a record-breaking year for the Idaho Lottery. Sales eclipsed $250 million for the first time!

The new sales record of $265 million is an increase of 10 percent over last year’s record.

The governor accepted a check for $53.5 million. That's $5 million more than last year!

And since this was the last time the governor would be accepting a lottery check before leaving office, Idaho Lottery Director Jeff Anderson wanted to honor him like they honor all lottery employees about to retire.

"Those artists create a commemorative scratch ticket for people who are leaving us, and having happy trails in their next chapter of their life and that's what we provided to Gov. Otter today was his very own scratch ticket."

Otter was turned into "Butch Cash’idy" for his commemorative scratch ticket.

Since the lottery was created in 1989 it's given almost $850 million back to the state mostly for education.

Anderson says he believes total dividends will reach $1 billion in about two years.