Around 100 people were back out Thursday searching for Michael Vaughan. It was a big community effort. The family said they are thankful for all the support. 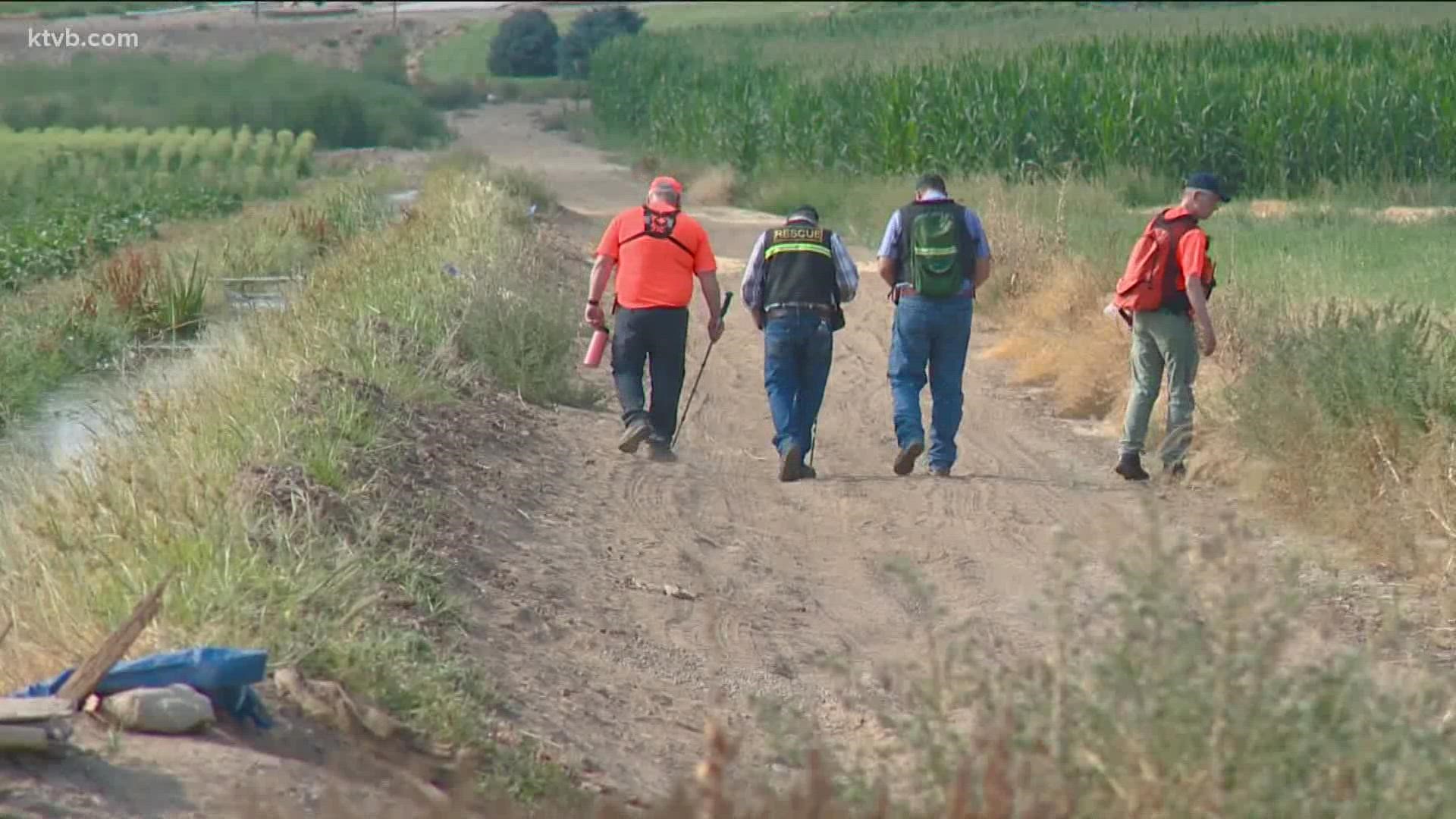 FRUITLAND, Idaho — A massive community effort is still underway to find a missing 5-year-old boy in Fruitland. On Tuesday night, Michael Vaughan disappeared and was last seen near his home.

He lives near Southwest 9th Street and South Arizona Avenue in Fruitland.

Michael has blond hair, blue eyes, and is about 3-foot-7 and weighs around 50 pounds. He goes by the nickname "Monkey." He was last seen wearing a blue Minecraft t-shirt, dark blue briefs and blue flip flops.

Since Tuesday, multiple law enforcement agencies and the community have been searching around the clock for him.

Thursday was the second full day and the community come out in a big way to assist in the search.

People from all over Payette County, eastern Oregon and Boise were out searching Thursday. Officials said by the end of the day they’ll have every inch of the city covered.

“So we need to be careful how we conduct our searches today. These are citizens in our area who trust me, these are people who have emotional ties to this thing as well," Fruitland Police Chief J.D. Huff said.

On Thursday evening, the Fruitland Police Department announced that they are asking for the public's help in identifying people who were seen near 8th and 9th streets and Cornwall Way between 6:30 p.m. to 7:15 p.m. on July 27.

Residents in the area are asked to thoroughly search their property including all outbuildings, vehicles and irrigation ditches.  And review any security camera video for any sign of Michael.

Police say even if you do not believe you have relevant information, please contact them. Investigators are working to create a complete picture of the time and area Michael was last seen. They say every minute counts when searching for a missing child.

Fruitland police said they are committed to finding Michael and will leave no stone unturned. They added that Michael’s family has been fully cooperative with law enforcement and the community is asked to be respectful of their privacy during this difficult time.

No searches involving the community were planned for Friday. Police say they have aircraft, drones and canines working in the area. The grid search of Fruitland Thursday morning covered the city completely and some of the surrounding areas.

The public can still search for Michael but is urged to be respectful of private property rights and stay out of cultivated fields unless getting the owner's permission.

On Friday night, the FruitlandPolice Department announced that they will hold a press conference at 2 p.m. Saturday to give an update on the search for Michael.

"We also want to emphasize Michael's family continues to be fully cooperative with law enforcement," Huff said in a statement. "We ask the community to be respectful of their privacy during this difficult time."

Fruitland police also asked the public not to spread rumors or speculation about what happened to Michael since it makes it more difficult for law enforcement to go through tips.

Tonalea Atnip was among the volunteers. “My kids are all grown and I can't even imagine the feeling of not knowing where your child is, it’s heartbreaking," she said.

Tasha Brown doesn’t know Michael, but she, along with about a hundred others, have also been handing out fliers, searching the city looking for the 5-year-old.

"The first night right after we got the Code RED from Payette County, me and two of our friends came out and we walked eight-and-a-half miles until 3 a.m. searching," Brown said.

Huff said they thought it was important to organize Thursday’s search and expand it into the city.

"It’s pretty incredible to know you’ve got a community and that much support when we need it, but it’s also a big challenge for us have to coordinate the efforts, where this isn’t something that happened in the city of Fruitland very often," Huff said.

Some businesses like Idaho Pizza Company even closed on Thursday afternoon to join the search.

She just saw Michael on Monday night and said Michael’s grandfather asked her to share this statement:

"He wants the community to know that they are so very grateful for everybody coming out and mining these streets and looking for Monkey. The show from this community has been so amazing, there’s so much gratitude and thankfulness from the family and they wanted it to be known."

All this is happening while the family still waits and hopes for answers as to what happened to their little boy.

Huff said they are thankful to the community and the support. This is an ongoing investigation, so he couldn’t talk about specific details about this case. But he added another search is scheduled for Friday.

Neighboring agencies have also been aiding in the search for Michael, like Idaho Mountain Search and Rescue Unit (IMSARU). They were called out Tuesday night to search.

Officials with IMSARU said it's important to act quickly whenever anyone is missing, but possibly even more so when it is a child.

"If they're experiencing anxiety from being lost and being separated from their family, loved ones and the surroundings they're familiar with, easing that emotional distress and getting them back to their family is clearly important," said Scotty Perkins, the public relations director of IMSARU.

Perkins added that another aspect of urgency is the use of K9 teams to aid in the search. The sooner they can use their K9 teams to pick up the path of the subject, the more quickly they can narrow the search area and focus search resources in a more targeted space.

In addition to K9 teams, IMSARU also has used search teams, trackers, drone resources and bicycle teams. Their human tracking teams can evaluate tracking signs of the terrain they're searching. They will look at things like footprints, vegetation that's been disturbed and more, which also helps focus the search area.

There have been 23 IMSARU members who have responded to the callout so far.

"All of those resources will be in play for a search like this at this discretion and coordination of law enforcement, who is overseeing this particular search," Perkins said.

While Idaho Mountain Search and Rescue was called off on Wednesday afternoon, Fruitland Police continue to coordinate search efforts. They ask those who live in the immediate areas to search thoroughly their property and security camera footage.

As community members remain involved in the search for Michael, IMSARU said it's crucial for people to stay in touch with officials while doing so.

"That way we don't have teams of folks searching the same area repetitively and potentially, inadvertently missing areas that are important that need to be searched," Perkins said.

Perkins added that it's important that any clues that may lead to more insight into the subject's whereabouts be left undisturbed and reported to the incident command as soon as possible.

Fruitland police told KTVB that the department's Facebook page will be the best place for people to find official updates.