Council members left with more questions after bringing in the Ada County clerk to explain options regarding initiatives on proposed library and stadium projects. 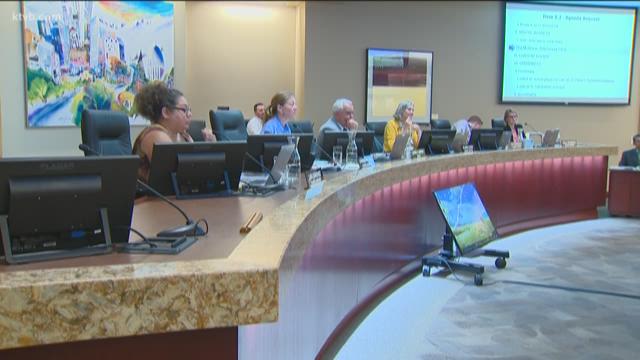 BOISE, Idaho — “Clear as mud” is how one Boise City Council member described the process moving forward when it comes to the initiatives on the proposed library and stadium projects.

A local citizens group, Boise Working Together, gathered enough signatures to get a vote on the ballot for a vote on those projects. It’s now up to the council to decide whether or not to adopt the petitions or let them go to a vote in November.

It’s a confusing situation so they brought in the Ada County clerk, Phil McGrane, to their Tuesday night meeting to clear everything up. Things are still unclear though even after a question and answer session.

“Before we put something on the ballot, we want to see the legal authority,” McGrane said. “And because we don't have something to work with at this phase, we need to get through phase one in order to discuss phase two.”

Enough signatures were verified by the Ada County Clerk on May 29 but as currently written, the ordinances would require the public to approve the voting process first. Essentially, right now, the initiatives would be on November ballots and would be a vote to have a vote. Then, if the public affirms a need for a vote, a second vote on the projects themselves would have to be held at a later date.

Now, there is confusion on how the second vote would work.

"The initiative is seeking a vote on these respected issues and that question is still uncertain,” McGrane said.

It's uncertain because the City Council is unsure if they have the authority to put these projects on a ballot. McGrane said at the meeting that question is best left to the city attorney’s office.

“My role is not to determine necessarily what you have the authority to do,” McGrane said. “My expertise is largely in county government, specifically in the clerk’s office, and specifically the election code not city municipal code.”

RELATED: Public will have a chance to comment on Boise library, stadium projects

McGrane went on to say that if the city brought forward something to put on the ballot, he would ask the city what authority they have to put it on there, but again said the question on if they do have the authority or not is best left to their own city attorney’s office.

The next phase though is clear to the group that worked to gather the signatures for a petition.

"It's how to structure a vote and the city must stop spending money without voter consent,” said David Klinger, spokesperson for Boise Working Together.

Back in January, the city attorney's office raised legal concerns over the language in the initiatives. In certificates of review for the proposed initiatives, interim city attorney Natalie Mendoza said they are unconstitutional because the proposal is administrative, relating to the municipal budgeting and appropriation processes. Mendoza also wrote that Idaho code on city finances would preempt the initiatives, and would place improper limitations on future city councils.

Klinger told KTVB that their own attorney says the language is broad and it isn’t just going after the two specific projects.

"We made our own refinements to the initiative language, we made it very broad. Klinger said. “These initiatives are not aimed at any one library or stadium project.”

The group wants the City Council to take the most direct path to the vote at this time.

"Get the citizens the vote, which is what they said they wanted when they signed these petitions,” Klinger said.

Another question that was brought up by both Mayor David Bieter and Council President Lauren McLean was regarding if the city can adopt an amended ordinance.

McGrane responded by saying that wouldn't be able to move forward because the initiatives have a life of their own, not only from the organizers. but also from the people who signed the petitions.

"They have the choice of adopting it as the language that is in the initiative or not, and that determines that process," McGrane said. "Any other alternatives the city proposes are different questions entirely and we're not in that space to determine anything."