A University of Idaho student made a prosthetic arm using a 3D printer for a childhood friend after he lost half of his left arm in a car accident. 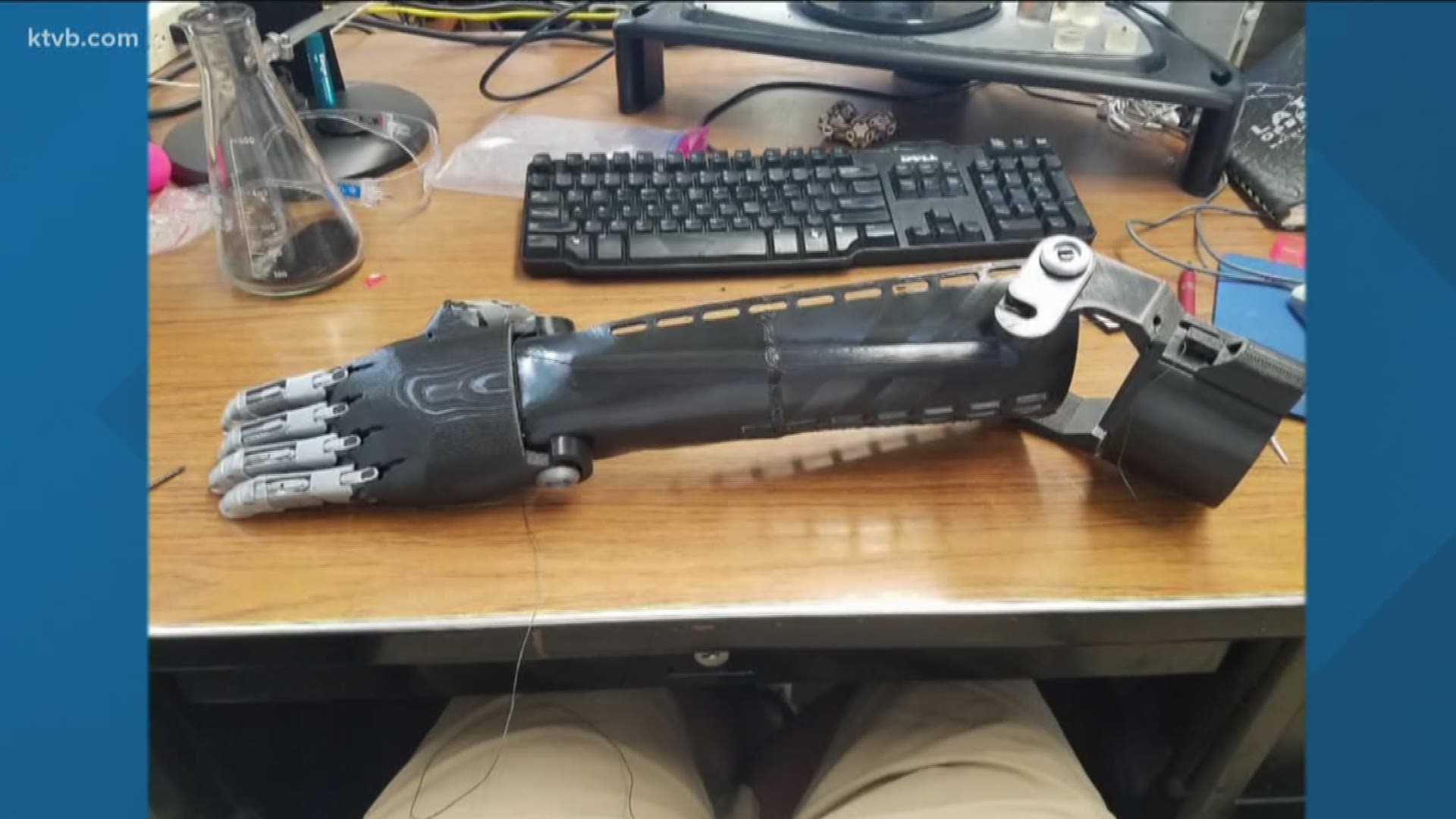 BOISE, Idaho — Losing a limb can be a traumatizing event, a person must re-learn how to live life with something they may have thought they’d never lose.

Alex Montes from McCall lost his left arm in a car accident in 2018. He was driving on Highway 55 from McCall to Boise, when he fell asleep at the wheel. Montes said he had his arm hanging out the window and the car flipped over onto it, causing him to lose it.

Montes told KTVB he didn’t get a prosthetic arm because he doesn’t have health insurance, and he couldn’t afford the out of pocket cost for one. He said a basic prosthetic would run him around $10,000.

To help him out, Jacob Miller, who is currently studying mechanical engineering at the University of Idaho, comes in.

Miller lived in Boise growing up, but before that, he lived in McCall and that's how he met the Montes family. They grew apart over the years after Miller moved to Boise.

During the summer of 2019, Miller took a fishing trip to Coeur d’Alene with his current roommate. His roommate ended up knowing Alex’s older brother.

“So, we were at dinner with Cesar and my roommate and I was asking how his family was and asking about Rainier and Alex,” Miller said. “He was like Alex actually lost his arm in a car accident about a year ago.”

From there, the conversation turned to how Miller might be able to help.

"He was like oh yeah you're an engineering student, you can figure something out,” Miller said.

Miller said he didn’t think it was going to be so easy. A couple of weeks later, Miller ended up going on a camping trip and one of his friends had told him about the European company, E-nable.

“They're open-source nonprofit, so you can take their designs and swing it,” Miller said.

He returned to Moscow and recruited one of his classmates, Marshall Townsend, to work on the arm with him and had just bought a 3D printer.

"I saw that design and I was looking at it and thought we could probably do something,” Miller said. "We just bought the material to do it which was really cheap actually and then just started running with it."

Altogether, it took around 15 different pieces, five different printing sessions, and about 30 hours for the printer to make the prosthetic.

“All the fingers, they have joints, so they move. So those pieces were printed individually and there are pins connecting them,” Miller said. “Same thing with the palm, it’s one big palm thing but you have to attach the fingers on to that.”

Throughout the process, Miller tried to temper expectations for Montes.

“It’s such an impactful event on Alex's life and I was very wary of that, because we're not in the prosthetics field, we're not studying prosthetics,” he said. “We're going to give it a shot, it'll be cheap and quick as far as that, but this is the first shot at this.”

Montes was receptive and more than ready to take anything he could get.

“I was excited for the chance of something new,” he said.

When the arm was ready for Montes to see it, he drove to Moscow from McCall and tried it out.

“We pulled out this arm and put it on and made sure it was comfortable, but he didn't quite have the range of motion I thought. So that arm is adjustable, and you can adjust how far the fingers closed too,” Miller said.

The arm needed to be tweaked for Montes to get a firm grip on anything. Luckily, Montes had just the tool to make the arm fit a little tighter.

“We had some duct tape, and we just folded it onto stuff and taped it on,” Miller said. “Once we had the other strap on there, he was closing the hands and stuff like that.”

After that last adjustment, Montes was able to pick up a glass.

“Being able to just do something so small like picking up that glass made me really think what else I could do,” Montes said. “I never thought that I would be able to use my left hand again.”

It was a moment that will stick with Miller and Montes for the rest of their lives.

“To see the look on Alex's face when he picked up the glass was one of the coolest things I've ever seen,” Miller said.

“It’s really making me feel human again is a good way to say it,” Montes said. “Because I can do anything without thinking too deeply about it, I can just do it now.”

Miller is set to be done taking classes at the University of Idaho in December. He said he’s kicking around the idea now of starting his own business that would create arms for people in need.

Meanwhile, Montes is currently working as a chef in McCall. He told KTVB he has been using the hand to do small things throughout the few months he has had it.

“I use it to open doors, I use it to stabilize the steering wheel when I'm driving,” he said. “Those are just little things, but things I thought I'd never be able to do.”

Montes does have a Gofundme going to raise money for a different prosthetic arm.

RELATED: Keepin' It Local - Nampa printing farm is on the leading edge of a new industry